Omega Store opens doors in Russia! Omega has kicked off a flagship store in the heart of Moscow in the famous GUM department store, located on Red Square. This Neo-Russian building was built at the end of the 19th century by Alexander Pomerantsev and takes up almost the entire eastern side of the Red Square. These days, the GUM counts more than one thousand designer and luxury boutiques. To commemorate the opening of its Boutique in Moscow, Omega offers an exclusive limited-edition watch christened as the De Ville X2 “Red Square”. Created in 18kt red gold, the X2 was inspired by the 1951 Cosmic. The latest X2 “Red Square” is sized at 35mm x 35mm. The X2’s name refers to the combination of Roman and Arabic numerals on the four-hour markers. 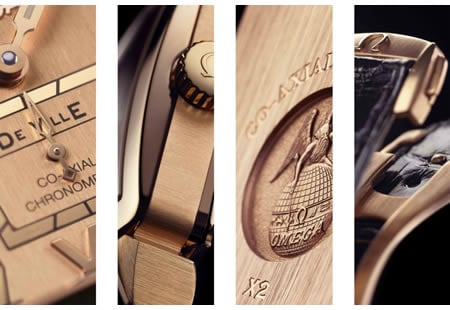 Movement is the automatic Omega caliber 2610, with COSC certification as a chronometer. It has a power reserve of 48 hours and is fitted with Omega’s proprietary Co-Axial Escapement and the Omega free-sprung balance. Together they offer excellent stability to the watch’s going rate over long periods and enhance the performance of a truly superlative chronometer. Luxurious finishes such as decorated bridges confirm the prestigious nature of this movement. Even the back of the watch is decorated with a vertically brushed satin finish and a medallion of Chronos, the Greek god of time, and the legend ‘X2 Co-Axial Escapement’. The case also bears the limited series number of the piece which is produced in a limited series of 99 pieces, only available at Omega boutiques.
Source