In May, Lamborghini’s racing division Squadra Corse revealed the new Huracan Super Trofeo EVO2 racing car. Created to compete in all three continental Lamborghini series from the 2022 season, Lamborghini’s newest Super Trofeo model is described as the most high-performance version ever to race in its one-make series. To celebrate the launch of the latest iteration, watchmaker Roger Dubuis has introduced a new limited-edition timepiece as a part of its ongoing collaboration with Lamborghini Squadra Corse. The new Excalibur Spider Huracán Monobalancier (MB) captures the engineering excellence and the sporting DNA of Super Trofeo EVO2 with its horological complexity and bespoke material choices. 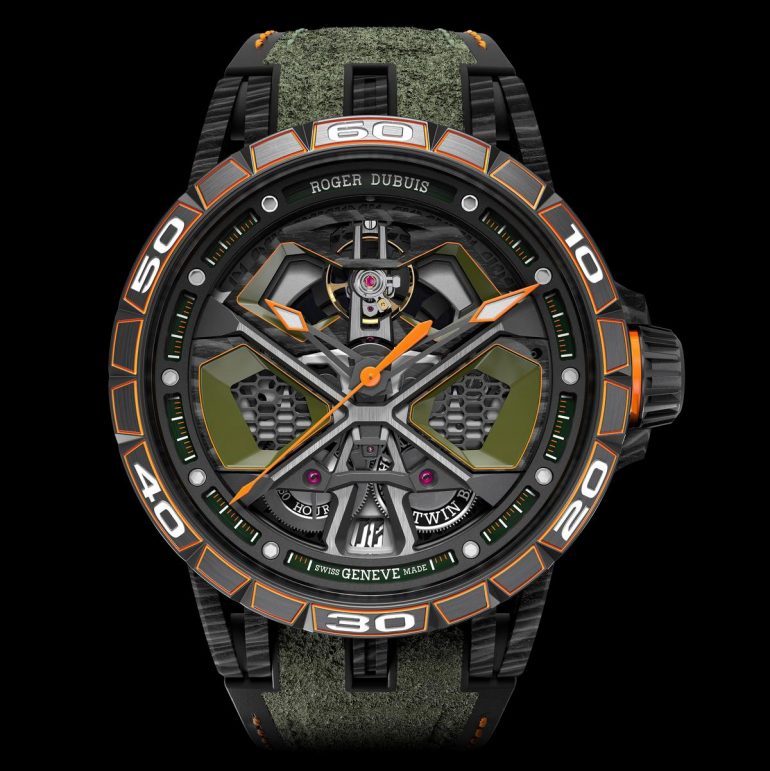 The 45mm case of the Excalibur Huracán MB is made out of SMC carbon; an in-house developed composite material that’s similar to the one used on the Lamborghini Huracán’s monocoque chassis and body panels. The idea is to make the watch as light as possible for comfortable wearing. The bezel, on the other hand, is made of black DLC titanium. The limited-edition watch is decked out in khaki green with neon orange accents to match the livery of the Huracan Super Trofeo EVO2 showcased by Lamborghini a few months ago. The crown is inspired by the Huracán’s racing nuts, while the upper caliber strut-bar bridge is designed to look like those found on the V10 engine in the race car. 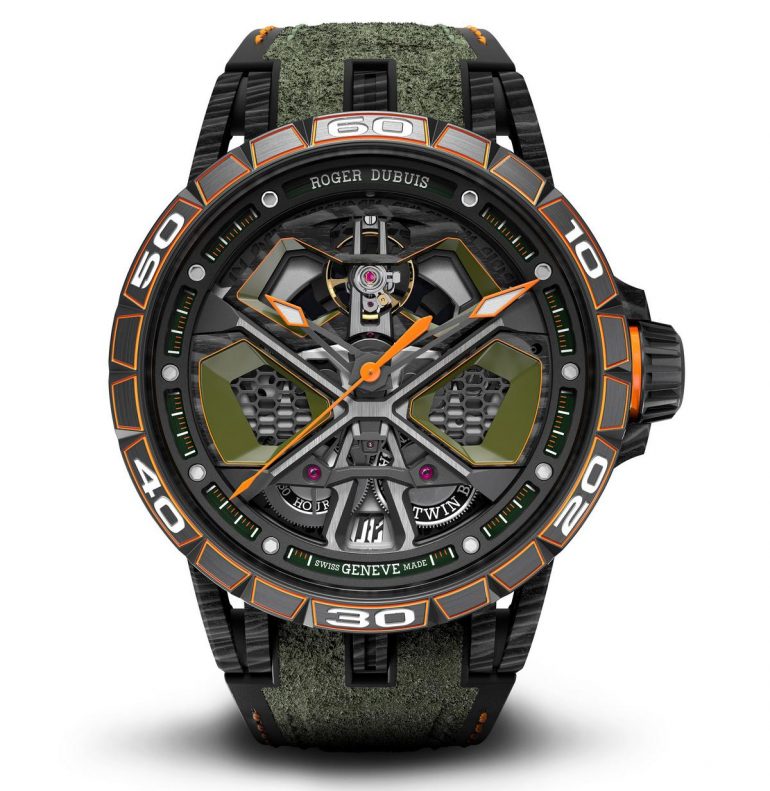 The honeycomb motif made famous by the Huracán can be found on the grille behind the skeletonized dial, which also features the hexagonal shape of the dashboard in the Italian supercar. Behind the dial is an automatic monobalancier RD630 caliber that offers a power reserve of 60 hours. Twin barrels and a 12° tilted balance wheel represent the signature caliber associated with Lamborghini Squadra Corse. For ultimate comfort and flexibility, the strap is made of a combination of rubber and Alcantara. At the same time, the inner lining also features the unique Pirelli P Zero Trofeo R pattern found on the race car. The Quick Release System lets the user quickly swap out like a fast pit stop. Limited to just 88 pieces, the Excalibur Spider Huracán MB will debut at the final race of the Lamborghini Super Trofeo championship and is priced at $59,500. 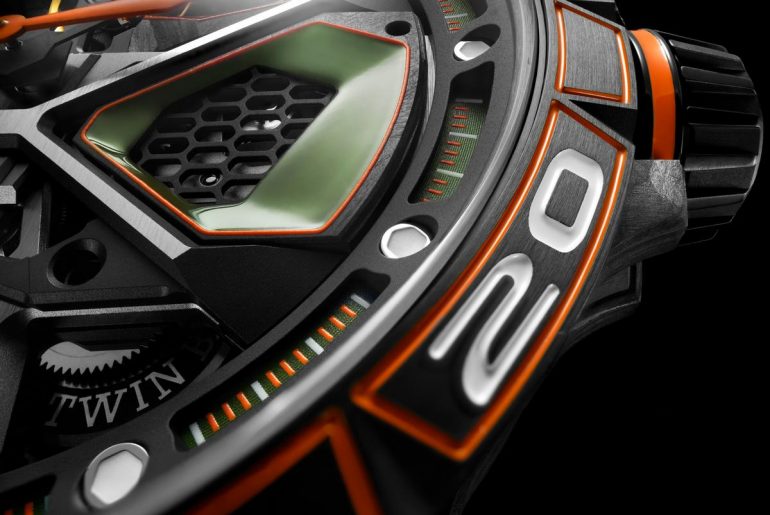 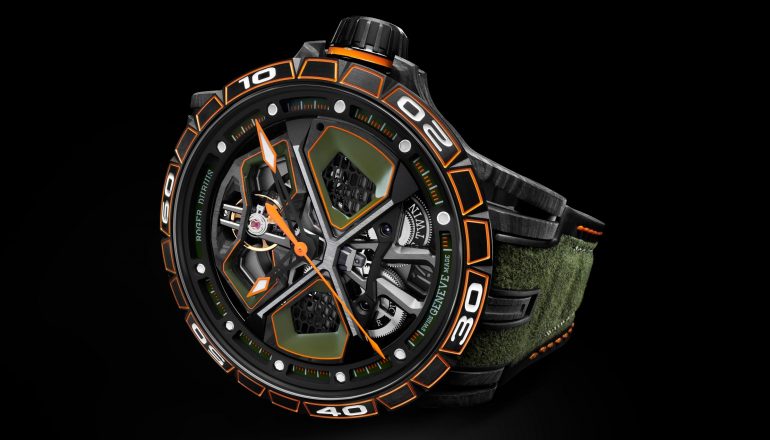 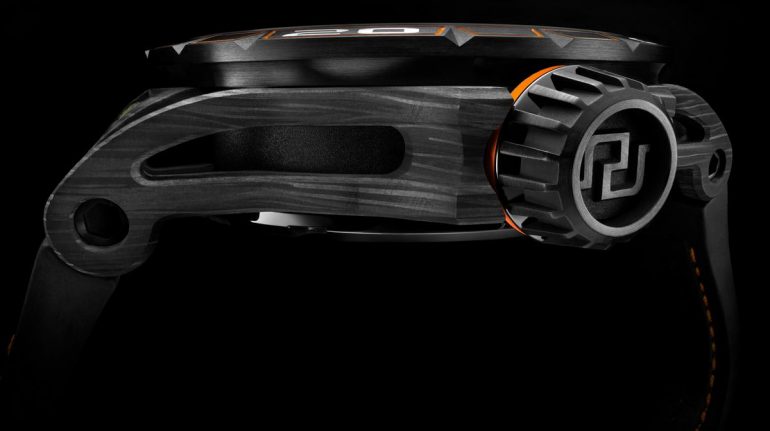 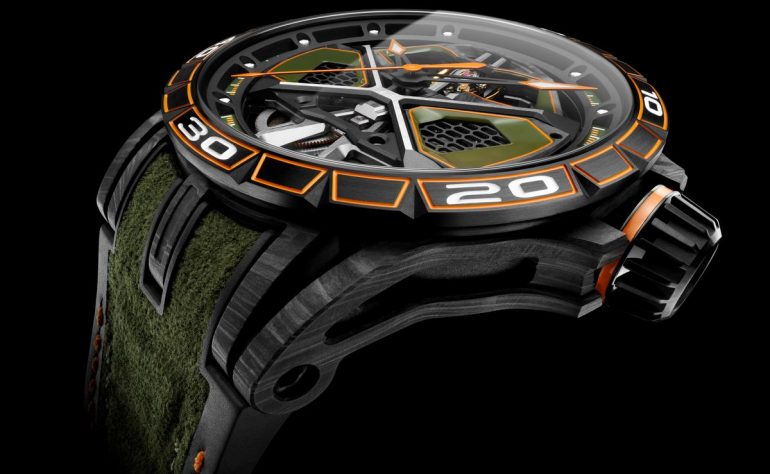