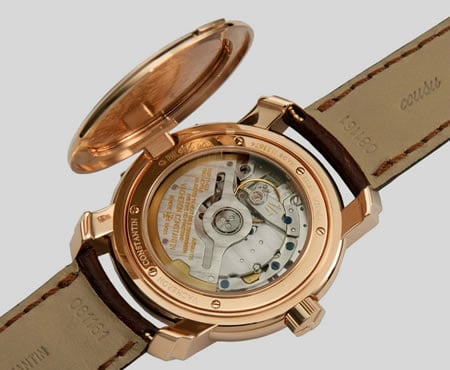 Apparently, two things stand out in this distinctive timepiece – An officer back which has been engraved on the outside with the Russian coat-of-arms, with its two-headed eagle. When the back is lifted, the very compact – 11 1/2 lignes for a thickness of 5.05 mm – Manufactory-made caliber 1126QPR automatic movement can be admired through a sapphire crystal. Its black dial absorbs rather than reflects the light and greatly improves the legibility of the time. This is indicated by two facetted sword hands and 18kt rose gold applied hour-markers and Roman numerals. This Perpetual Calendar timepiece also features a retrograde date. At the end of the last day of each month, its hand jumps back instantaneously to the first day of the following month and starts all over again. The case measures 39mm and has fan-shaped horns and a crown stamped with a stylized version of the Maltese Cross, this timepiece only needs to be set once a century. So it won’t need setting again until 2100!
Source