One of the most anticipated cars to debut at the Guangzhou auto show in China is finally here; Meet the 2021 Mercedes-Maybach GLS 4MATIC – the newest name to join the German automaker’s uber-luxurious double M-badged line-up. If you’ve been following the automotive section of our website, you’ll be aware that the Mercedes-Maybach GLS is based on the company’s second-generation GLS flagship SUV that has been tweaked to focus even more on luxury and comfort. Starting with the uber-luxury SUV’s aesthetics, while it retains the overall styling of the regular GLS, the Mercedes stylists have given the Maybach version plenty of unique styling elements. There’s a lot of glossy chrome covering the entire bodywork of the SUV; quite literally, a lot! It’s not difficult to guess which market Mercedes had on its mind while designing the gaudy styling; there’s nothing European about it. 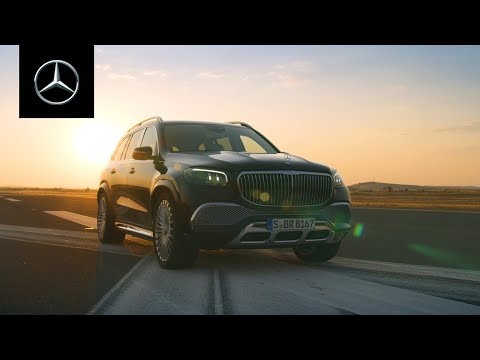 At the front is the massive grille in glossy chrome that features a striking design with vertically oriented thin slats. Even flashier is the mesh inserts in the lower part of the bumper, which is also in glossy chrome. Matching the design of the front grille is the optional 23-inch wheels with a multi-spoke layout. A chrome strip runs along the entire width of the tailgate and continues on the fenders, above the taillights. The Mercedes-Maybach GLS will be available in a total of eight two-tone finishes, which doesn’t look half as good as the similar paint scheme on the Maybach S Class limo. 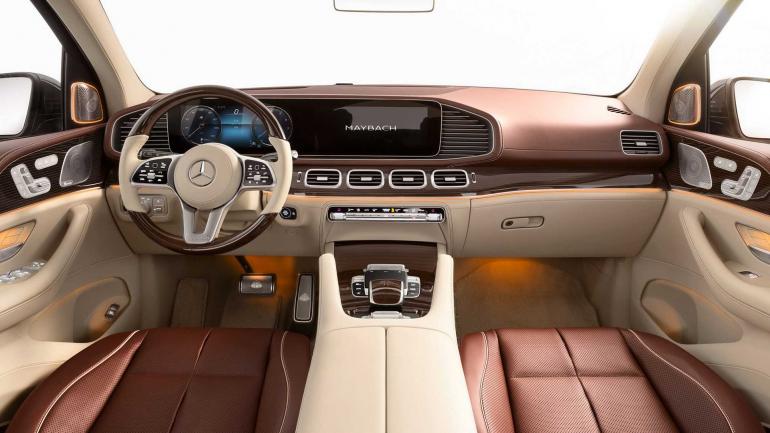 The story inside the cabin, however, is completely different; the interior is just as luxurious and stunning as one would expect from a Maybach. The third row of seating has been replaced to make room for more leg space for rear passengers and the individual, reclining seats for them; a five-seat configuration is also available as an option. The cabin is replete with top-shelve amenities like folding tables, champagne flutes, dedicated fragrance, and a rear-seat entertainment system. Things like ventilated and heated massaging seats, opaque roller blind and electronic panoramic sunroof all come as standard. 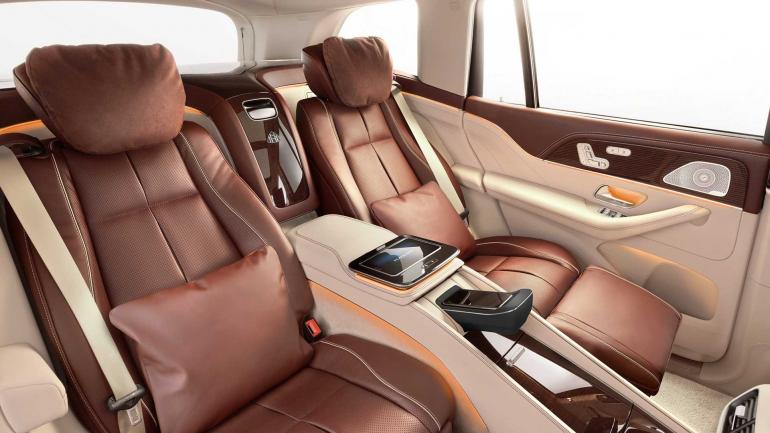 Powering the luxury SUV is a twin-turbo V8 4.0-liter engine, tuned to produce 550 hp and 538 lb-ft of torque. The unit is assisted by a 48-volt mild hybrid system that offers an extra 21 hp and 184 lb-ft. Mercedes claims that the Maybach GLS does the 0 to 60 mph sprint in an estimated 4.8 seconds and tops out at a limited 130 mph for the US model; the Euro model can hit 155 mph. The Maybach SUV will reach the US market in the second half of next year, but the pricing hasn’t been announced yet.