We know a lot of fun facts about Georges Prosper Remi known by the pen name Hergé or better yet as the creator of ‘The Adventures of Tintin’. We know that Hergé never actually visited the countries of Tintin’s adventures; we also know that Hergé was accused of racism for Tintin in the Congo. If you too are a Tintin enthusiast, this newest piece of information will leave you as fascinated as us! 80 years after its creation, the original Hergé cover for Tintin and the Blue Lotus is being auctioned. This particular cover was designed in 1936 for the fifth album of the adventures of Tintin. Unfortunately it was not commercially viable as the cost to mass produce a cover with as many as four colors would prove expensive back in the day, and the splendid artwork of the heroic young reporter facing a dragon was shelved. The drawing was instead given to Jean-Paul Casterman, the son of Louis Casterman, Hergé’s editor, after which it was folded six times and put in a draw. After all these years tucked away, the drawing saw the light of the day in 1981, when the younger Casterman asked the author to sign it and again a decade later in 1991, when the Hergé Foundation displayed it after taking it out on loan. 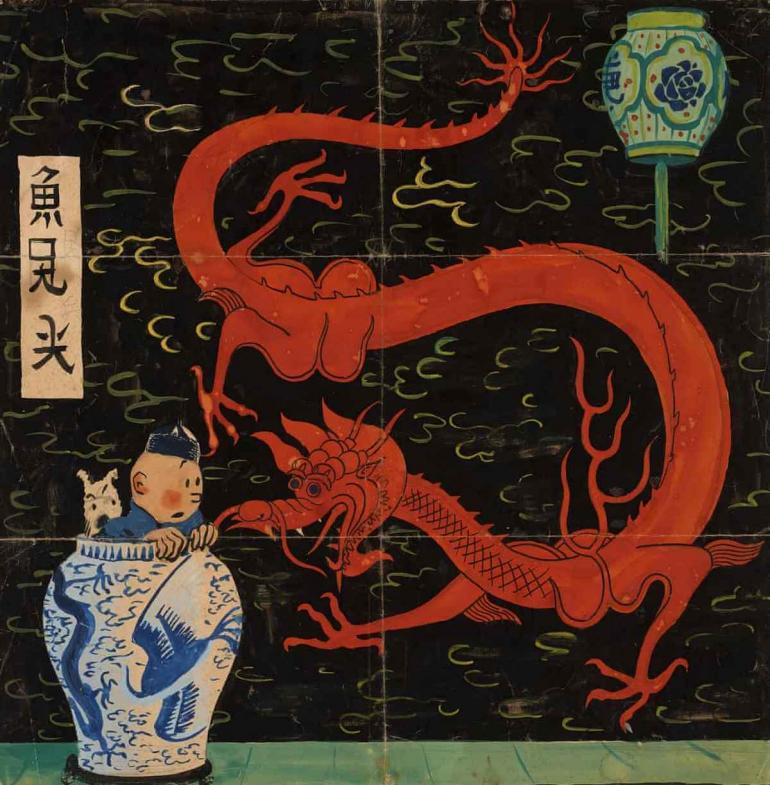 The double-page Blue Lotus drawing is painted in India ink, watercolor and gouache in four colors (black, blue, red, yellow) measures 34cm x 34cm in size. The cover drawing is expected to draw bids of $2.5m-$3.5m. Earlier too such illustrations by Hergé, have sold for a staggering $2.9 million. The last two pages of the comic book, King Ottokar’s Sceptre sold for $1.153 million at Sotheby’s in Paris.

Tags from the story
Artwork, Tintin