Whiskey connoisseurs in the house – please raise your hands because we have some news for you! Being one who loves sampling and procuring the finest spirits across the globe, you’d be keen to know of the world’s largest bottle of whiskey ever made.

It happens to be a 32-year-old Macallan single malt that contained 311 liters of the golden concoction. It was recently sold for a whopping $1.3 million (approx.) at an auction held by Lyon & Turnbull. Called ‘Intrepid,’ it measures 5ft 11in tall and was purchased by an anonymous, international buyer.

As per the makers, the whiskey was named Intrepid in honor of the drive and achievements of 11 of the world’s most pioneering explorers who are featured on the bottle, including Sir Ranulph Fiennes, Sir Robin Knox-Johnston, Jamie Ramsay, and Karen Darke. 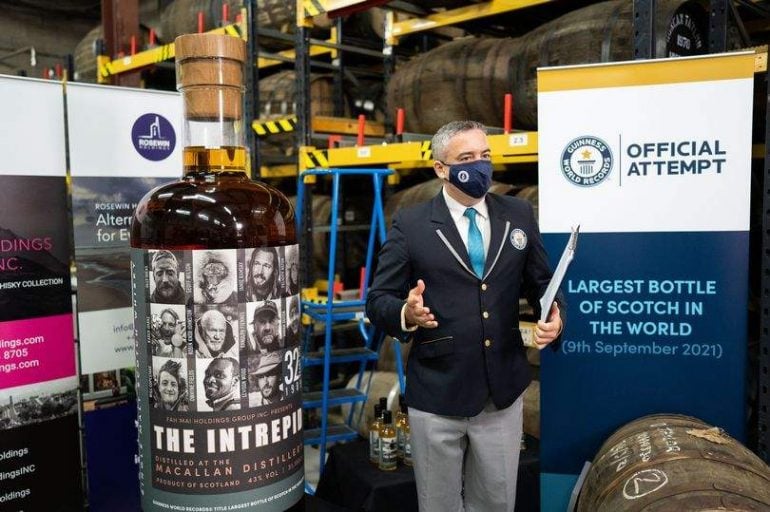 Commenting on it, Daniel Monk, who conceptualized the whiskey, said, “This is a passion project to celebrate the life of my late father, Captain Stanley Monk, who was himself an explorer and achieved many amazing things during his life,”

He further added, “The Intrepid project has been an adventure from the start. I wanted to do something positive over lockdown, and the whole team has worked extremely hard with me to make it happen. I started contacting explorers during lockdown to get them on board and found people who could make and fill the largest bottle of Scotch whisky, and together we have achieved the dream.”

Remarking similarly, Gavin Strang, managing director of Lyon & Turnbull, added, “It certainly isn’t every day you get to auction a bottle of high-quality, single malt that also happens to be a record-breaker.” He also noted that the whiskey had “attracted so much global interest” and was “delighted the auction has been such a success.”

After maturing in two sister casks in Macallan’s Speyside warehouse for 32 years, the Intrepid was bottled last year by Duncan Taylor Scotch Whisky. Each of its sets comes with a replica of the main bottle design along with individual versions dedicated to the muses.

It was certified by Guinness World Records as the largest on being bottled, a few months before the auction. Well, talk about the love for whiskey!