Sotheby’s, one of the very prime auctioneers in the world is all set to unveil a rare blue diamond ring for gem lovers. Christened as “The Sky blue diamond”, this one is an 8-carat stunner, which has also been described as “wonderfully clear celestial blue”, by David Bennett, Worldwide Chairman of Sotheby’s International Jewelry Division. The exquisite gem has won immense praise for its iridescent blue shade and has a string of A-listers already queuing up for its ultimate sale.

Blue is the warmest colour. The spectacular 'Sky Blue Diamond', a Fancy Vivid blue #diamond ring weighing 8.01 carats, with a stunning mount by #Cartier, will be sold in Geneva on 16 November. Drop by our #London galleries this Thursday to see the magnificent jewel on view, along with other highlights from the sale. #SothebysJewels #SomethingBlue

While the shimmery blue ring will be displayed in London for a brief period, it will be presented for its finale sale at Geneva on November 16. “The Sky blue diamond”, has been accorded the highest possible color grading- Fancy Vivid blue by the Gemological Institute of America. Apart from being one of the very few (in the top one percent) to so be graded, the rare gem is also categorized as a Type IIb, a privilege conferred on a select 0.5 percent of all diamonds worldwide. 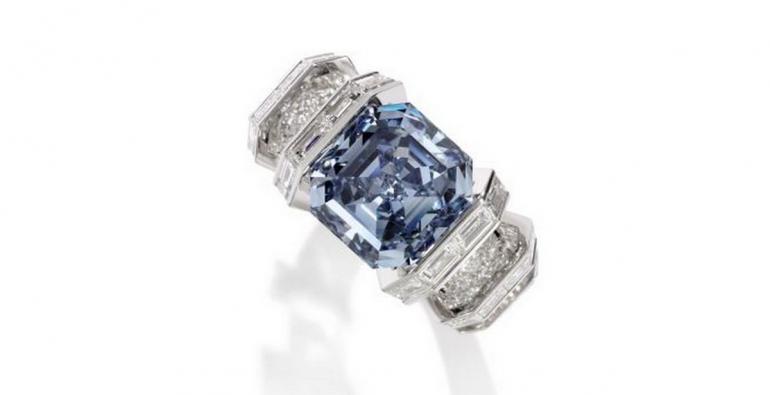 The blue marvel is set in a mount by Cartier amidst a beautiful cluster of white diamonds. While Sotheby’s has many pricey auctions to its credit, including the ‘The Blue Moon’ of Josephine which was purchased for $48.5 million in November 2015, and the pearl-shaped Zoe diamond that won a final bid of $32.6 million in November 2014, the “The Sky blue diamond” is estimated to fetch $25 million under the hammer. While it may not be the most expensive blue to be sold by Sotheby’s, owning it will nonetheless mean unparalleled pride!

Tags from the story
Diamonds, Rings