Ladies, keep your credit cards close and take a seat, we’re going to finally give you the news you’ve been waiting for: one of the world’s rarest handbags is up for auction, it’s a 30cm Diamond, Matte Himalayan Nilo Crocodile Birkin Bag encrusted with 18 carat white gold hardware encrusted with 245 glittering diamonds. You can swoon now. The bag is said to be in pristine condition and is expected to pull in close to $200,000 due to its rare and collectible nature.

We can picture Birkin enthusiasts sitting up a little straighter even as they read this. The bag has its share of famous fans with Victoria Beckham boasting a collection worth $2.3 million and Tamara Ecclestone owning some 30 odd Birkins. We’ve even heard rumors that Kim Kardashian owns enough Birkins to justify using one of them as a gym bag!
The last time we saw this much of a fuss over a Birkin was in 2011 when a red crocodile Birkin with diamonds sold for the world record setting amount of $203,150. This year’s Nilo Croc version might even smash that record as according to Kathleen Guzman, a Managing Director at Heritage Auctions, “This is the only time that a bag of this caliber has appeared on the luxury re-sale market. This is a dream piece for the collection of true Hermes aficionados.” True collectors are already probably liquidating their assets in preparation for the auction which will take place at Heritage Auctions in Beverly Hills on September 23, as part of the company’s Luxury Accessories Signature Auction. While other handbags from high end fashion houses will also be up for grabs, we’re sure that the Birkin will remain the brightest jewel in the auction’s crown. 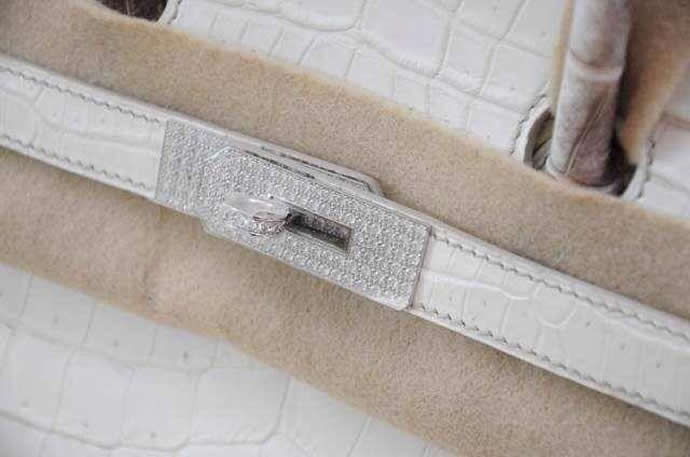