The incident happened between 2 and 4 AM after she had retired to her accommodation, which is at a prime residential location in Paris. Five masked men, dressed as police in ski masks and jackets held the concierge at gunpoint, who took them to her room and held HER at gunpoint first and then tied her up in the bathroom and locked the door.

She is not pleased. Apparently, shocked by the incident, but not physically harmed. She was in the city for the Paris Fashion Week with her jing-bang – mum, sisters, and friends at tow, who were ALL missing when this happened. INCLUDING her security guard Pascal Duvier. 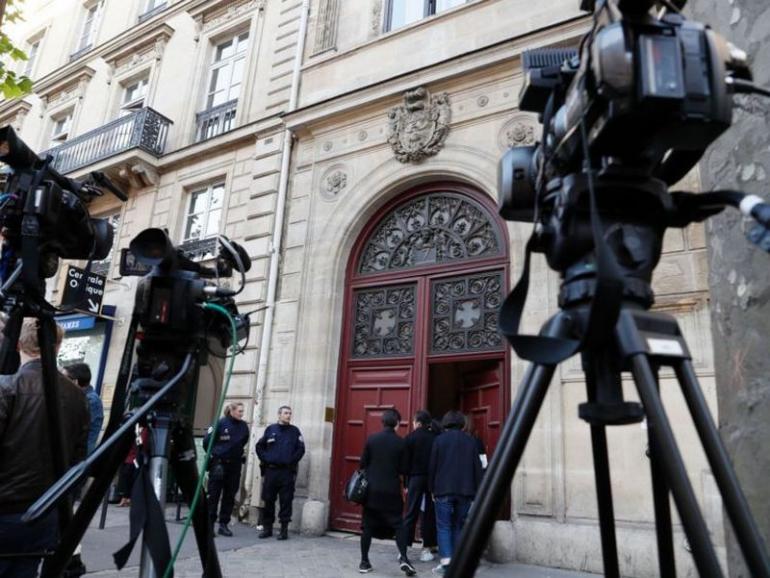 The plot thickens. Partying with her sister Kourtney at the Arc night club in Paris. This, after the star, was almost had her bum kissed just a few days ago in the same city! What kind of guarding is he doing? Tsk. Kourtney and Kendell Jenner were partying with Hailey Baldwin, while Kim retired home after a long day out in the fashion week events. Also present in this pack were friends of the Kardashian, model Jasmine Sanders and actor Terrence J.

Her mum was also there, and also her children North and Saint, but apparently nowhere near her when the incident took place. So. We are to believe that she was absolutely alone making it very convenient for these masked men to come in and wave their weapon and loot her and leave and not hurt anyone and get away with it. For now. Her family ‘rushed to her’ from the different partying places they were at, to “be by her side and comfort her” during this dark hour. Apparently, her husband who was at the time performing in New York cut short his show due to “family emergency”. There is no news where he went from there. Not Paris, because Kim and Kourtney left the city the first thing this morning. Strange.

Also, if you notice, the British media has addressed the thunderbolt Kardashian as just another kitten in the big kennel that Hollywood is. It could either be their snooty British pride to relent to the shenanigans that the family displays so publicly, or they are not keeping up with enough celebrity bites. Must be all that Brexit stress.

Tags from the story
Kim-Kardashian, Paris