What would you say if George Clooney were to deliver tequila to your doorstep? And an award-winning one at that! “Yes!” Correct? I would like to. Heck, I would say yes even if he delivered me a dead squirrel but let’s not get to that. Hotel Cipriani would nod in agreement to this just as the Venetian property has for Clooney’s Casamigos. The winner of a Gold Medal at the Los Angeles International Spirits Competition was hand-delivered to the hotel by the Hollywood hunk himself. The Orient-Express Hotels Ltd. Property became the first to stock the spirit, and the actor didn’t fail to mesmerize his audience (yet again) as they looked on while he unloaded case after Casamigos case.

Since its launch in January, Casamigos has become the world’s most popular and fastest-growing tequila, with Oprah Winfrey naming it her favorite brand. ‘Our idea was to make the best-tasting, smoothest tequila whose taste didn’t have to be covered up with salt or lime,’ crooned Clooney and bar mogul Rande Gerber, creators of the brand. The label also appeared at the Venice Film Festival, where attendees, including Clooney himself, lauded it on opening night. 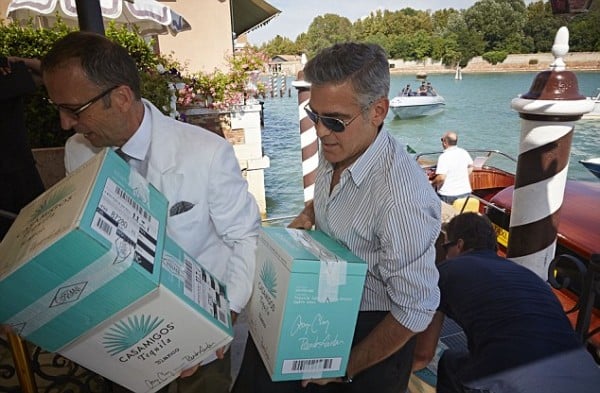 Named after friends’ properties in Mexico, ‘Casamigos’ will soon be enjoyed throughout Europe. For now, the head barman at Hotel Cipriani, Walter Bolzonella, has created a signature cocktail named Goodnight Amigos. A regular guest at the hotel, George Clooney, already has the Buonatte there to his cocktail credit. Goodnight Amigos is an adaptation of that with its original ingredients of lime, ginger, and cucumber peel, as well as two drops of Angostura and, of course, a tequila base. Clooney too has rendered to the Hotel a revamped adaptation of the slogan of the spirit- ‘brought to you by those who drink it and in this case, by those who make it as well.