Oxford-educated Ruja Ignatova is termed the most successful criminal in history. She co-founded a cryptocurrency of her own and duped millions of investors across the world for billions of dollars. Half of the world’s authorities are on her lookout. Along with the FBI’s most wanted, she is also on the list of Europol, Interpol Red Notice, etc. After a good run of nearly three years with OneCoin, the glamorous Bulgarian businesswoman vanished into thin air, almost like she never existed. Ditching a mega OneCoin event in 2017, the entrepreneur got off a plane in Greece, never to be found. With truckloads of money at her disposal, this disappearing act was hardly an ordeal for the mastermind who eloped with no less than $4 billion stolen from a whopping one million people worldwide. We’re delving into Ignatova’s life, lies, highs, lows, and languish:

A genius from the start –
Ruja Ignatova was born in Bulgaria in 1980 to a Romani family. A decade later the family moved to Germany and lived in the small town of Schramberg. Ignatova earned a Ph.D. in private international law from the University of Konstanz at 25. The university is one of Germany’s elite institutions and is referred to as “small Harvard”.. Dr. Ruja’s resume also boasts a law degree from Oxford. After completing her education, she worked with McKinsey & Company, a global management consulting firm.
The ambitious woman harbored big dreams and established OneCoin Ltd in 2014. She marketed her currency as the Bitcoin killer, “We are the Bitcoin killer. We’re faster, safer, and cheaper,” she promised. Ignatova was married to a German lawyer, with whom she had a daughter in 2016. The self-styled cryptoqueen even posted a video one week after the birth of her daughter, thanking people for their support and gifts. Barely a year later, she bamboozled billions and left it behind (not the money) – family included. The people who are openly linked with the swindler are her brother, Konstantin Ignatov, and an American who was her boyfriend
Birth of OneCoin:
OneCoin was launched in late 2014 by Ignatova and Sebastian Greenwood. OneCoin claimed that its primary line of business was exchanging educational materials. Members could purchase instructional packages for between 100 and 118,000 euros. Each shipment came with “tokens” that may be used to “mine” other tokens. With over 3.5 million members, OneCoin boasted a sales revenue of around $4.4 billion. Fueling the frenzy were glitzy launch events that attracted millions of investors from 175 countries.
The self-styled billionaire flaunted a larger-than-life persona
This flamboyant cryptoqueen took her title quite seriously and dressed for the role. Clearly fame-obsessed, she held grand events worldwide to promote her cryptocurrency OneCoin. In true queen-like fashion, the entrepreneur stepped out in elaborate gowns, heavy makeup, and OTT jewelry.
It is not something you come across every day at a professional event, but she wanted to leave an impact as a celebrity would. She cleverly painted a picture of wealth, convincing people to hand their savings to her with charm and persona.
The events saw packed halls in iconic venues like Wembley Arena in London, Dubai, and Columbia, roping in investors and clients as part of a big happy family, celebrated with the popping of expensive champagnes.
These promotional infotainment events were presented as a magnum opus starring Dr. Ruja Ignatova and her co-founder Sebastian Greenwood, making investors feel like they are part of a revolutionary occurrence creating history. If fame and money were her goals, she certainly had achieved them. She became globally renowned, and her brainchild Onecoin was the hottest thing after Bitcoin.
Fame-crazy cryptoqueen had a penchant for magazine covers
What’s the ultimate validation for someone who wants to be famous in the business world? Landing on the cover of Forbes! OneCoin owner made it to the May 2015 Forbes Bulgaria cover. The whole interview was even promoted on the OneCoin website to be fed as marketing fodder to investors.
However, the cover was a sham. BehindMLM shared, on being handed a copy of the Ignatova Forbes cover, reader Jodi Dojnia took it upon themselves to investigate why the co-owner of a global Ponzi scheme would appear on the cover of Forbes, much the less to be interviewed about her Ponzi empire. The investigation revealed only three women were featured on the international Forbes covers, and Ruja Ignatova wasn’t one of them.
But all was not fake as the OneCoin Founder and CEO did make it on the cover of the Feb 2016 issue of Financial IT. A UK-based trade publication that focuses on financial technologies.
Her inevitable downfall:
Over time, more and more people started realizing the shortcomings of the cryptocurrency and its legitimacy. Investors saw through the scam which, instead of blockchain or a network was built on the MLM model and that OneCoin was nothing but a figment of Ruja’s imagination. Whistleblowers started calling out the ponzi scheme. As per BBC, In October 2017, Dr. Ruja was scheduled to speak at an event in Lisbon, Portugal. But to the dismay of hundreds of her fans she did not turn up. A no-show by the co-founder only cemented the doubts critics and investors had about her modus operandi.
Ruja did feel the grip of the law tightening on her. And in her paranoia she even bugged her boyfriends apartment. To her horror she discovered that the love of her life was cooperating with the authorities on an FBI probe into OneCoin. This is when she took a flight from Sofia to Athens. That was on 25th of October 2017 and it was the last anyone saw of Dr.Ruja Ignatova. In an email unearthed during the investigation, Ignatova said to her co-founder, “take the money and run and blame someone else.”
Back at OneCoin, her brother, Konstantin, faced up to 90 years in jail and over $2 million in fines. He is believed to be connected to the Bulgarian mafia and was offered a deal in New York- in exchange for information on his former co-conspirators. 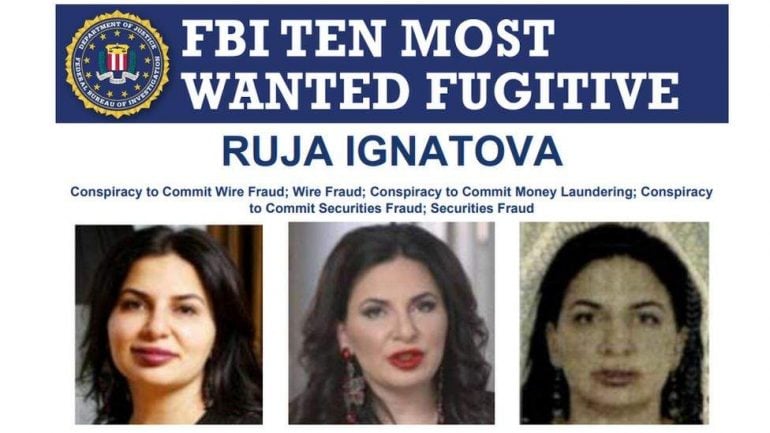 Ignatova is the 11th woman to be included in the FBI list in its 72 year history.
FBI is after Dr. Ignatova and how! After nearly half a decade of searching for her, they posted on Twitter, ‘Ruja Ignatova is the newest addition to the #FBI’s Ten Most Wanted Fugitives List. She’s #wanted for allegedly leading a fraud scheme that affected millions of investors worldwide. We’re offering a reward of up to $100,000 for info leading to her arrest. DailyMail shared that Special Agent Ronald Shimko, who is investigating the case out of the FBI’s New York Field Office, said he hopes the publicity of being on the most wanted list will help track down Ignatova. ‘There are so many victims worldwide who were financially devastated by this,’ Shimko said.


‘We want to bring her to justice.’ As per the FBI’s statement, ‘Ignatova targeted individuals who may not have fully understood the ins and outs of cryptocurrencies but were moved by Ignatova’s impressive resume and the marketing strategies used by OneCoin.’
So, where is Dr. Ruja Ignatova hiding?
Is she alive? Is she dead? Has some unhappy investor settled scores with the cryptoqueen once and for all? There are loads of theories about the whereabouts of the evil genius who no one has spotted in the past five years; or have they, and they just don’t know it? As per Germany’s Interpol Red Notice, it is believed that Ignatova may have undergone plastic surgery to alter her appearance, dyeing her dark hair blonde and losing weight (as shared in a YouTube video link above). A Daily Mail story also suggested her association with suspicious associates, like Russians and Bulgarian crime syndicates, could’ve led to her death. However, the portal also reported some recent sightings that imply she may be alive and kicking with truckloads of money, a new identity, a fake passport, and several properties at her disposal. It’s no wonder the FBI has roped in the commoner to trace the untraceable sharpie. In all probability, the cryptoqueen is floating on the high seas where no police force has the power to arrest her.

After being incognito and away from the spotlight for over five years, we were surprised to see Ignatova in a 2021 YouTube video looking radically different. In the video, she says she is back after a sabbatical with more extensive plans to bring her cryptocurrency to the world by relaunching OneCoin. It would excite fame-crazy Dr. Ignatova to learn a film called Fake based on her antics is in the pipeline, as per Fool.com. A book and BBC podcast, The Missing Cryptoqueen, investigate how Dr. Ruja has stayed hidden.