Bloomingdale’s has done it. The upscale department store chain has revealed its fashion-cloaked football loyalty. How? Via a freewheeling array of “haute couture” football helmets unveiled in the windows of its flagship at New York’s 59th Street! When this year’s host city was reeling with Super Bowl frenzy, members of the Council of Fashion Designers of America joined artistic hands with Bloomingdale’s and the National Football League to give a never-seen-before bespoke makeover to macho helmets of surviving NFL playoff teams.

“I don’t believe we have ever done a major collaboration with the NFL before this,” said Frank Berman, executive vice president of marketing at Bloomingdale’s. And you won’t believe your eyes when you see yourself in some of those helmets, virtually, if you visit the store, thanks to the interactive component in the windows. So, lets see. Of the 48 ravishing options, what could you possibly try! Nicloe Miller’s clash-of-the-prints, stripy-floral helmet with actual flowers protruding? Very Grecian-Goddess-goes-to-the-football-field if you ask me! Or something that clashes with your outfit maybe!

For you to decide what that could be, we decided to curate a list of the top nine from Bloomingdale’s Fashion Touchdown. Now, if you’re thinking of the usual roaring panthers, bucking broncos and lightning bolts, let me warn you, what you’re about to witness is clearly far out. “I’m blown away by the amount of creativity that went into the helmets. Some of them are incredible pieces of art,” quipped Berman. And for good cause because Bloomingdale’s is auctioning off the haute helmets online, with proceeds going to support the NFL Foundation. So, without further ado, lets take our charitable picks, shall we? 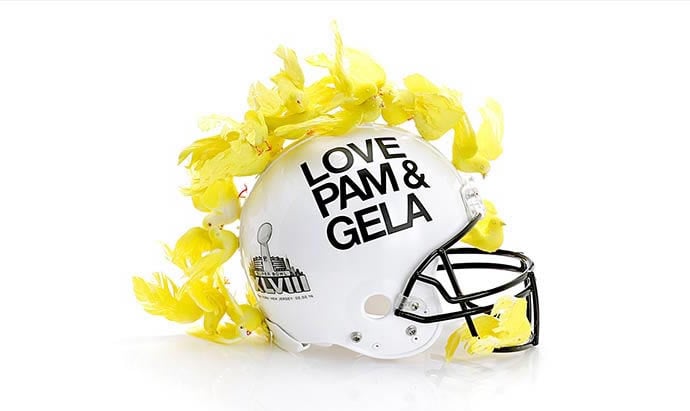 The founders of Juicy Couture, including the velour tracksuit that well, velour-ed its way over the world, have elevated terrycloth and West coast cool as their signature play. But while that may be so, the feather festooned birdies on their helmet tell a different tale altogether. Sport it, if you’re feeling festive. 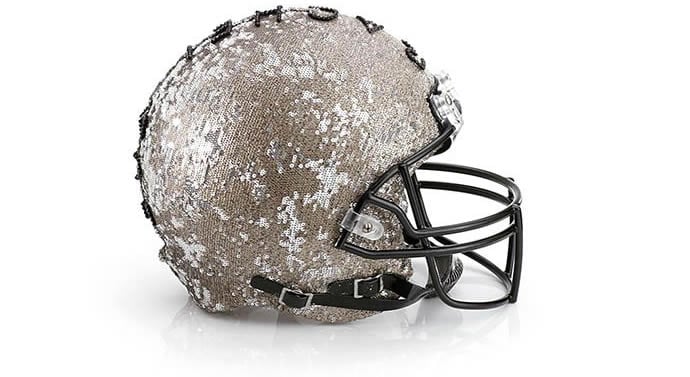 This stylist to the stars and celebrity in her own fashionable right took an official white NFL Riddell helmet and turned it into a sparkling piece of retro headgear. Studded with sequins, it is much like her other vintage-tinged pieces oozing ‘60’s and ‘70’s glamour. For when you’re feeling disco! 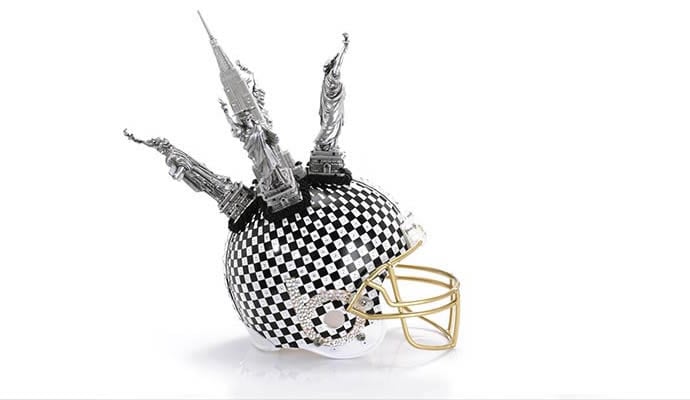 Next up, the in-house design team. In honor of the Super Bowl taking place in what it considers its flagship’s very own backyard, Bloomingdale’s admittedly celebrates all things New York. You’ve to see the Ladies of Liberty quartet and the embellished Empire State Building on their helmet to believe it. The “rhinestone-studded nod to Bloomingdale’s iconic black-and-white checked floors” could get your nod if “a real hometown champ” is your thing. 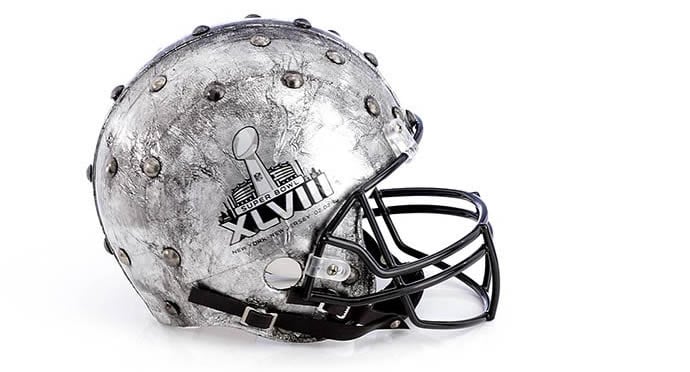 His metallic, helmet with rivets, definitely deserved a spot on our list. Why? “Steel and rivets! What’s tougher?” he quipped. But aside from that, he stands to be a favorite among fans of rock & roll. His music influences can be ‘heard’ in his menswear and with his helmet, the same edginess follows. For when you want to punk it up! 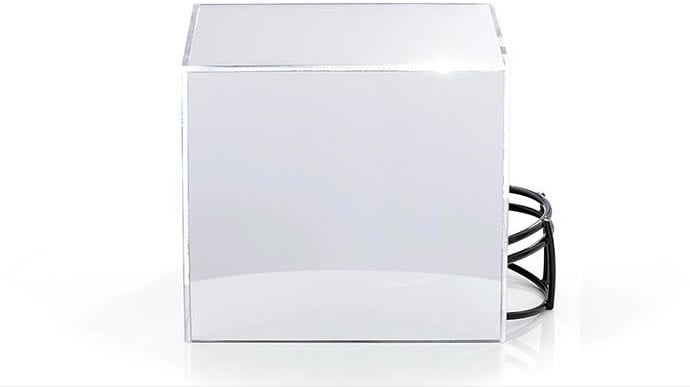 While soulful minimalism may be his thing, his boxy helmet is just that, a box. That is no surprise to his (many) fans, however, given the designer’s constant builder-like approach to construction. His references that span traditional and experimental are well reflected in his artistic creation. For when you want to think ‘out-of-the-box’! 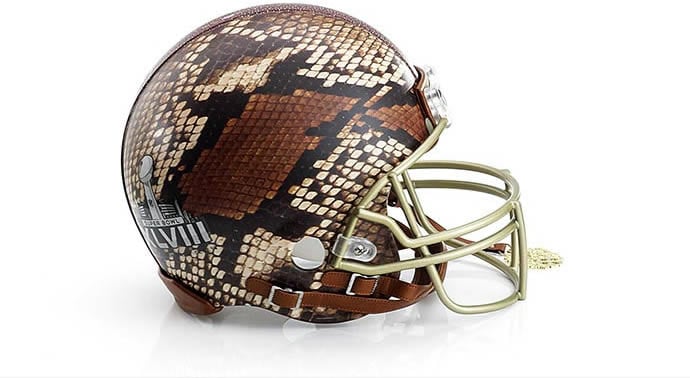 Shoe Tycoon, Camuto takes his helmet to heel-ed heights. With an eponymous footwear brand that later expanded into dresses, handbags, jewelry, et al, his helmet draws from snakeskin stilettos that expanded onto a stylish helmet. Sport it, if you love animalistic. 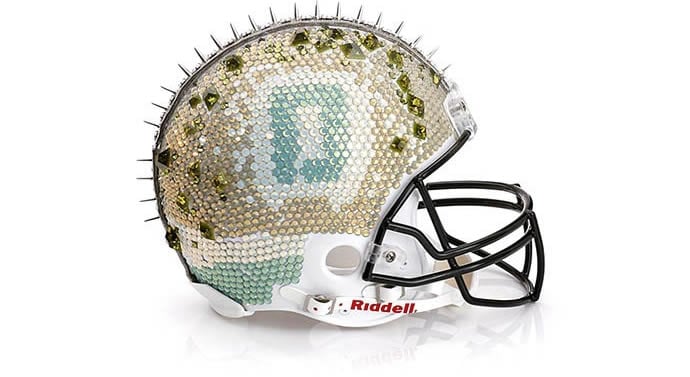 This designer-duo’s boho-chic creation comes in handy when you want to think of a stylish murder weapon. Just kidding! Although, it is definitely capable of stabbing other creations in the bidding because this bejeweled piece and its half plain, half studded glamour sure packs a studded punch! 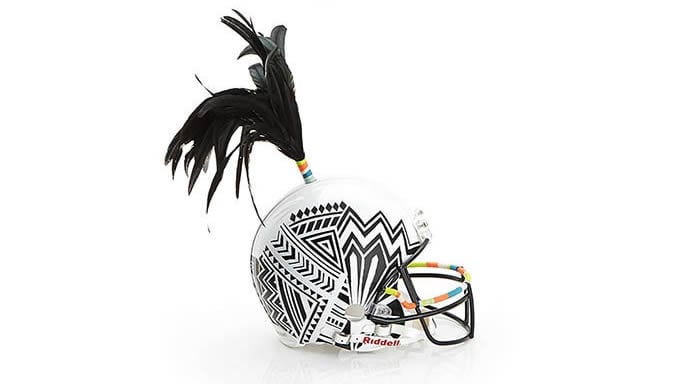 This L.A.-based designer’s bohemian spirit stands out well in her helmet, as does her penchant for ethnic patterns. Her easy-breezy collections have been snapped up from the start by stylish celebs and from the looks of it, as will be her eye-popping, tribal-esque helmet! 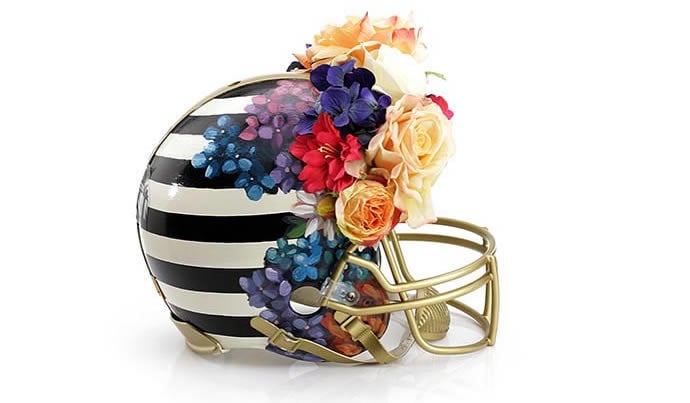 Her signature va-va-voom ruched dresses have sure left an impression on this delightful va-va-voom helmet. Her floral-tastic creation is beautifully designed and carefully constructed so much so that she reappears in our post and straight at the top of our list after already getting a mention for her headdress’s stripy-floral-ness taken further by the protruding flowers at the head.

Tags from the story
Helmet