Fashion isn’t for everyone to fathom. However, sometimes even an idiot can distinguish between what’s wearable and what clearly isn’t. Failing to understand this is a renowned designer label- Gucci that recently unveiled what could also be termed as its biggest fashion faux pas ever! We’re talking about the all-new ‘Clown Shoes’ by the brand that retails for a ludicrous $700 and are its most recent offering!

The beige colored footwear for men comes with a red toe and trainer toggles and features the Gucci logo emblazoned on a less than impressive Velcro strap. It is made from leather, neoprene, rubber, and mesh and is also available in a female version in crimson-gold. While Gucci may have anticipated high sales for its eclectic new offering, fans have clearly reacted otherwise with many even lashing out against it on Social Media. Twitterati, in particular, expressed its distraught with one fan quipping- “Perhaps to be poor is not so bad,” while another mused – “Shoes for the money needs to be equipped with a dual missile turbostroitel” 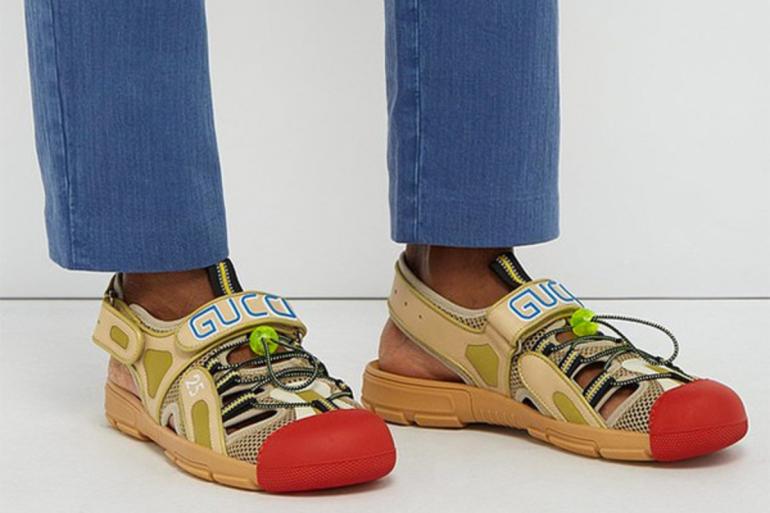 This isn’t the first time that the brand has received flak for its weird taste. Back in March, the Italian fashion house released a pair of ‘Dirty Sneakers’ for a whopping $870 which too had become the subject of ridicule amongst fans as well as many others from the fashion circuit. If, however, you beg to differ – head on to the brand’s official website where the quirky Clown Shoes currently stand for sale!

Tags from the story
Gucci, Shoes