For their latest Great Characters Limited Edition series, Montblanc sought inspiration from one of the most well-known and influential musical acts of all time – the Beatles. The creativity, style and enduring popularity of John Lennon, Paul McCartney, George Harrison and Ringo Starr has led to the creation of three limited edition pens each one filled with references to the artists who to this day have a tremendous cultural impact.

The Great Characters, The Beatles Special Edition
Featuring a bright multi-colored striped cap and barrel, this edition takes its color cues from the uniforms The Beatles wear on the cover of the album: Sgt. Pepper’s Lonely Hearts Club Band. The shape of the cap top evokes a microphone and the cone resembles the button on the mixing table from the recording studio. The clip features four moustaches, a reference to the moustaches each Beatle wore in some of their most famous portraits. The Au750 solid gold nib is ruthenium coated and decorated with a fine engraving.

The Beatles Limited Edition 1969
For this edition, Montblanc selected symbols associated with the iconic album “Abbey Road” to use on the lacquered cap and barrel of the writing instrument. There’s a peace symbol on the cap as well as the silhouette of The Beatles crossing Abbey Road, the metal inlay on the cap refers to the “LMW 28 IF” license plate of the VW that was depicted on the album’s cover. The Union Jack inlay on the barrel references the “Her Majesty” song featured on the record. The moustache designed clip, the recording microphone cone and other fittings are ruthenium coated and the Montblanc emblem in black and white resin is seen on the cap. The famous Apple logo used on so many historic vinyls was the inspiration for the pattern engraved on the handcrafted Au 750 solid gold, partly ruthenium-coated nib. 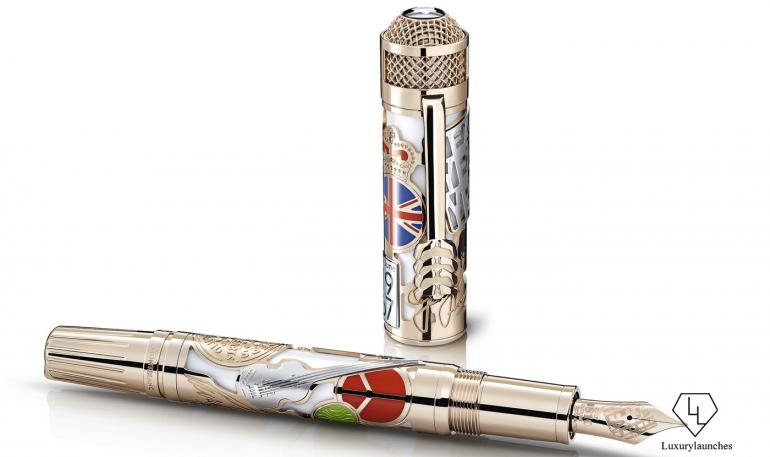 The Beatles Limited Edition 88
The last pen in the series features a solid gold skeletonized cap and barrel with several metal inlays adorned with lacquer. British culture and icons are the inspiration for the overlays on the cap from the Union Jack symbol to The Beatles’ signatures and portraits. “Yeah Yeah Yeah” refers to the front page of the Daily Mirror newspaper that printed the headline “Yeah Yeah USA” to announce the arrival of Beatlemania in USA in 1964. The same design detail is also reflected on the Au 750 Solid gold nib. The design of the barrel overlay includes the peace symbol, the Apple Records label as well as details from “Sgt. Pepper’s Lonely Hearts Club Band” album cover. The Montblanc emblem on the cap top, which is shaped like a microphone and the mixing table button that inspired the cone, is made from Au 750 solid gold.

Montblanc has also created a special ink and refills edition in a new psychedelic purple color inspired by the music style pioneered by the Beatles. The ink is presented in special packaging that evokes the pop art colours of the 1960s. A special notebook completes The Beatles writing experience with a cover made of refined fabric that draws inspiration from the cover of “Sgt. Pepper’s Lonely Hearts Club Band” and features the silhouettes of the four Beatles.

Tags from the story
Beatles, Mont-Blanc