Fashion stores are a world of their own. As much as the contents inside are tantalizing what entices you for a shopping experience is the edifice that houses all the fabulousness. Luxury stores have metamorphosed into artwork thanks to many fashion houses calling famous designers to design their luxury stores. These successful and super stunning collaborations have resulted in some unforgettable series of boutiques around the world that look like art installations. We are exploring the wonderful relation between fashion brands and famous architects by delving into the most beautifully designed luxury stores around the world: 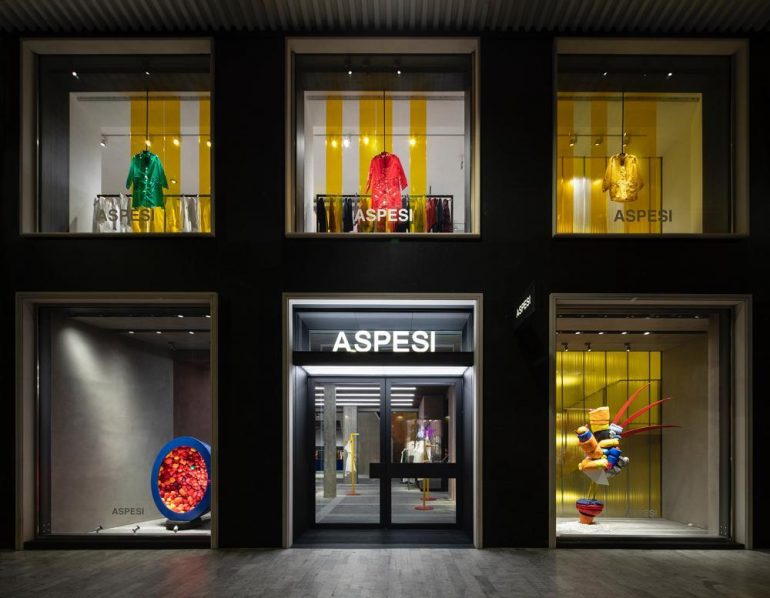 9. Aspesi, Milan:
A stark contrast to the D&G store is the Aspesi shop located in the city’s highly prestigious Duomo shopping district. The sizeable 6,458 sq.ft.store is spread across two lower floors of a former bank office. 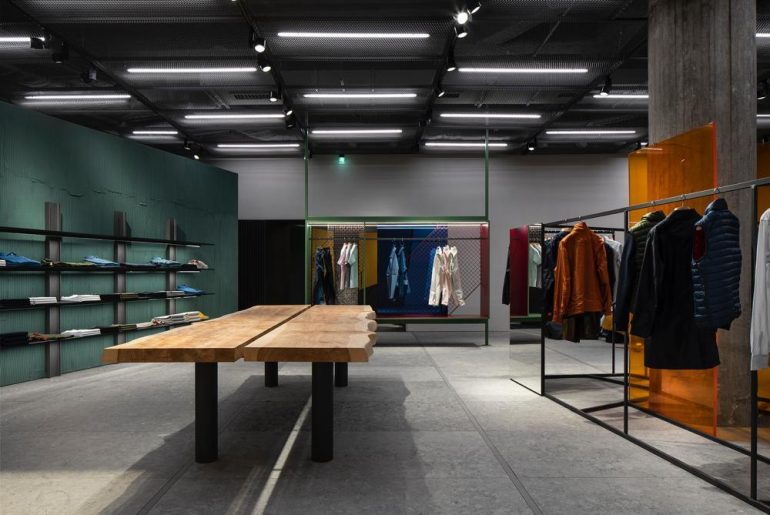 The designer, Dordoni Architetti, has turned this place into a modern and elegant space using an eclectic palette of materials such as plexiglass, stone, PVC and steel. The no-logo philosophy and the unconventional spirit of the brand remains intact with ample use of inlaid stone, and various industrial-inspired metal furnishings. 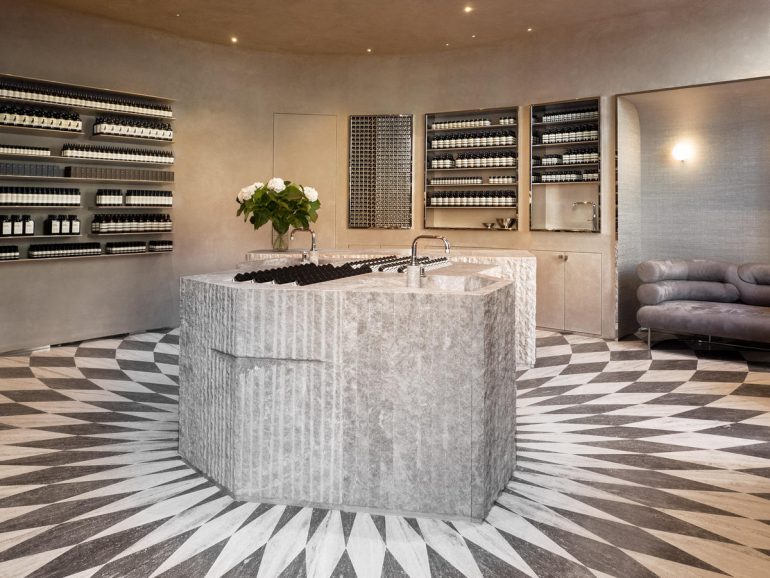 8. Aesop, Central London:
There’s something spectacular about the Aesop store in central London, designed by film director Luca Guadagnino. Whether it is the Boiserie-style panels, the huge marble-framed doorway or the rose-coloured marble that lends a mystique, Aesop’s Piccadilly Arcade store effectively echoes the materiality of the city’s ancient buildings. 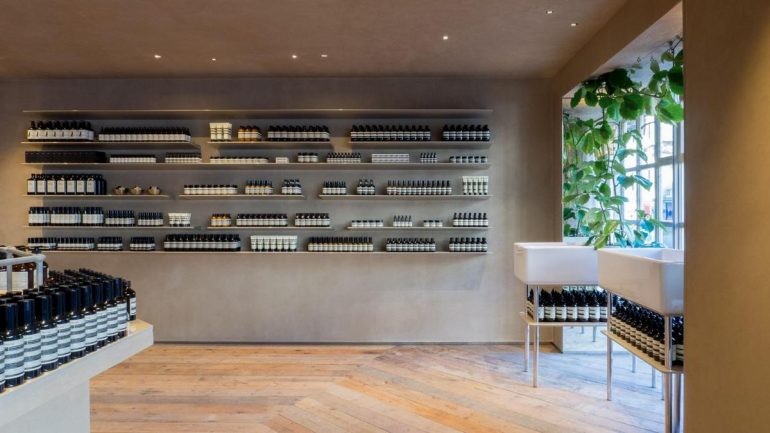 While the ground-floor shop area is anchored by two rough chunks of marble, the first floor is reached via a partially hidden stairwell finished with marble-inlaid steps and a leather-wrapped handrail. Aesop Piccadilly Arcade is the 16th store that the brand has opened in London. 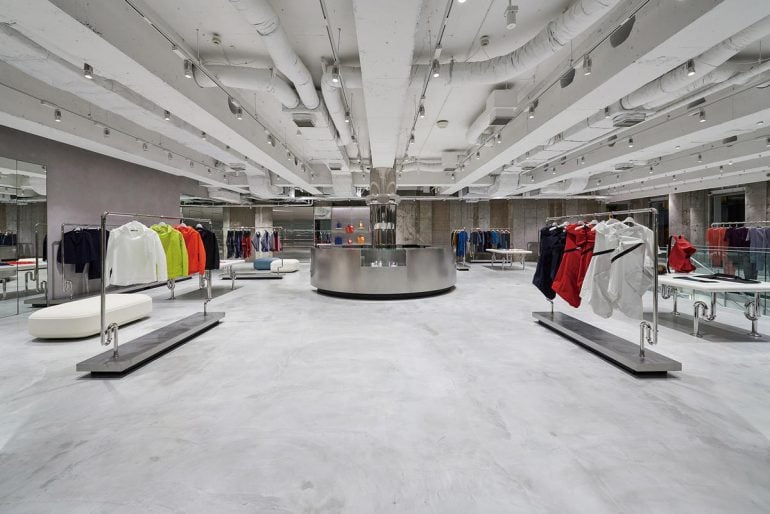 7. Issey Miyaki Osaka:
Japanese designer Shingo Noma created the interiors of the Issey Miyake store in Osaka’s Minamisemba neighbourhood. The space has a quirky vibe owing to additions like seating shaped like bars of soap and pipe-like clothing rails. The designer was inspired by Osaka’s long history of maritime trade. To stay true to the theme, a four-pronged silver sculpture resembling the handle of a traditional tap has been mounted on the facade. 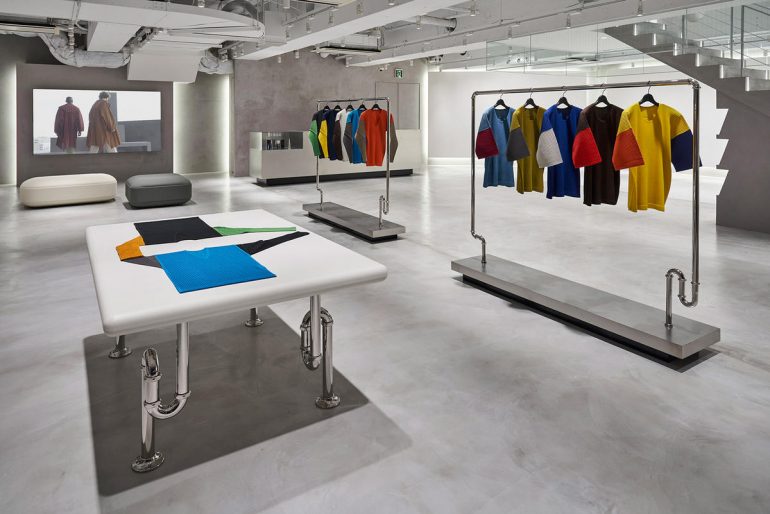 Take a closer look and you will find pipe-like tubing supporting the display tables, which all feature white, glossy countertops – almost reminiscent of the inner lining of bathtubs or sinks. The store is monikered Issey Miyake Semba. 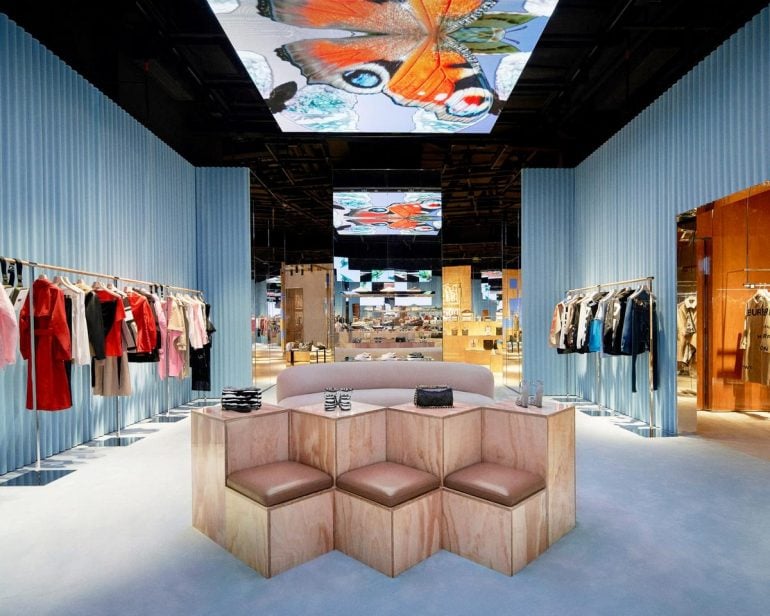 6. Burberry Shenzhen, China:
The iconic British fashion brand roped in China’s largest social media company Tencent to deliver a store that resonates with Shenzhen’s growing reputation for technology. This technologically-advanced setting extends the modernity to the shopping experience as well as shoppers use WeChat, a Chinese messaging and social media app, to engage with the shop. Shoppers can book one of the three themed fitting rooms, pre-select the clothes and play their own music while they try them on. 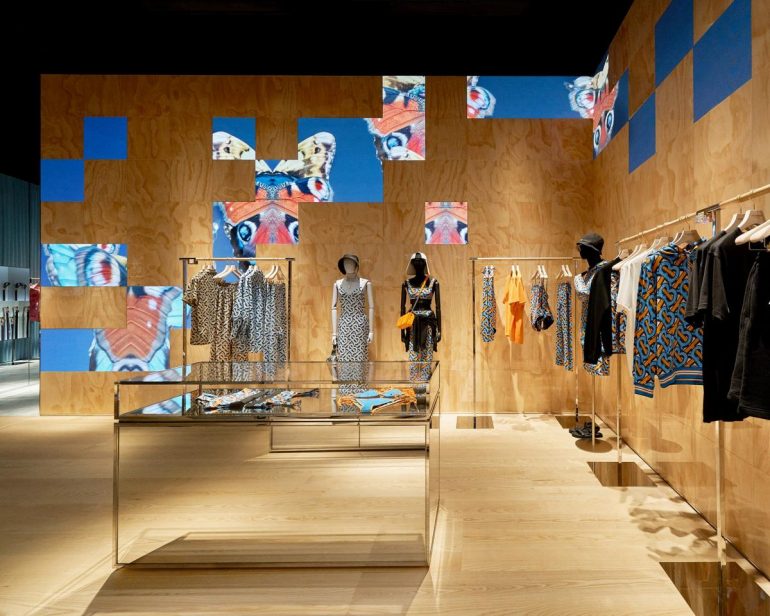 The store houses an interactive window display in addition to the 10 rooms in the shop, each of which has a different theme like Burberry Animal Kingdom, Reflections and the Thomas Burberry Monogram. The Thomas cafe is flanked by high-gloss beige with chamfered mirrors, animal-patterned wall panels, and layers of sandy-colored curtains. 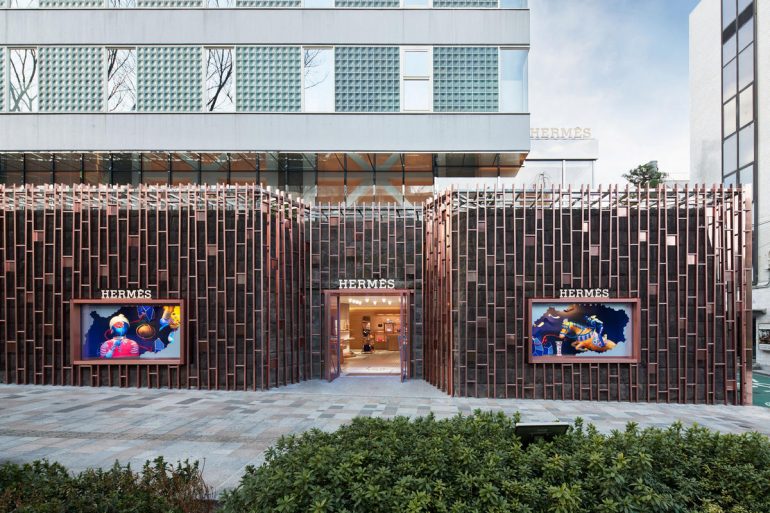 5. Hermes Omotesando Street, Tokyo:
On Tokyo’s prestigious Omotesando Street, stands the Hermès store designed by Parisian studio RDAI. The 488-square-metre store is the first freestanding Hermès outlet in Tokyo and is heavily influenced by aspects of Japanese nature and culture. The store is wrapped in a geometric screen made from pieces of copper-coloured stainless steel and small window displays are consolidated into the patterned cladding, along with lighting that illuminates the stonework at night. 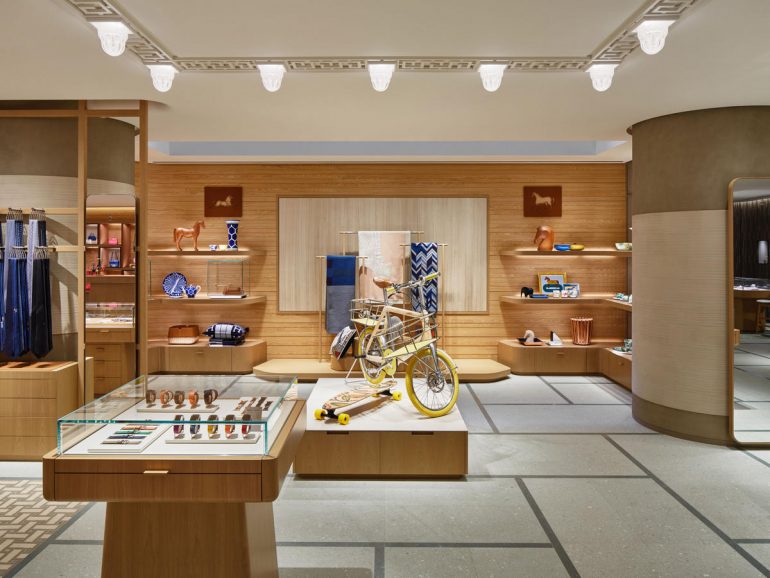 Once you step inside the store, you will spot abundant green stone in two shades resembling Japanese tatami mats. floating wooden shelves, walls covered in wood panelling and dramatic staircase contributes to the boutique’s most striking architectural features. A suspended bamboo sculpture by Japanese artist Shoryu Honda is another highlight of the store. 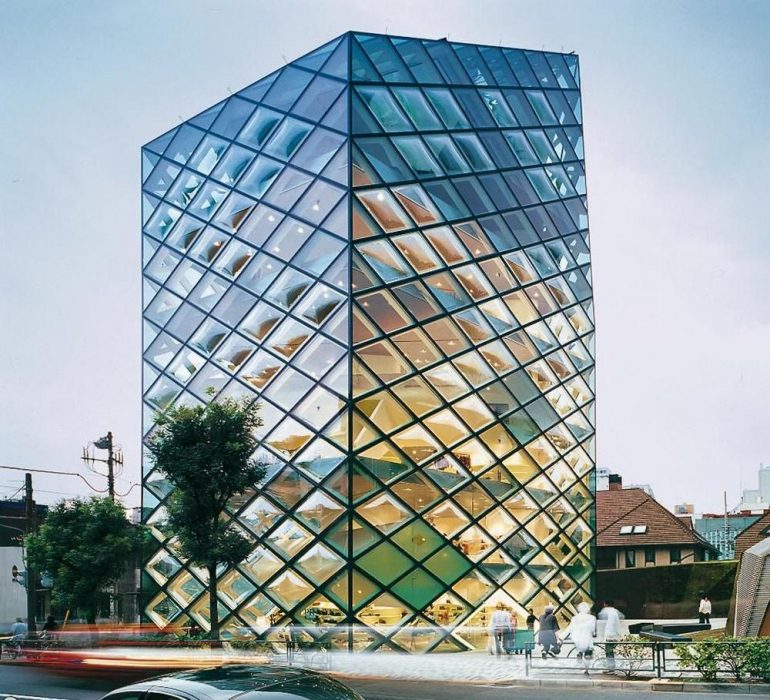 4. Prada Boutique Aoyama, Tokyo:
Swiss architects Herzog & de Meuron are the brains behind Prada’s six-floor building located in the district of Aoyama and is famous as one of the most recognizable architectural works of the city. 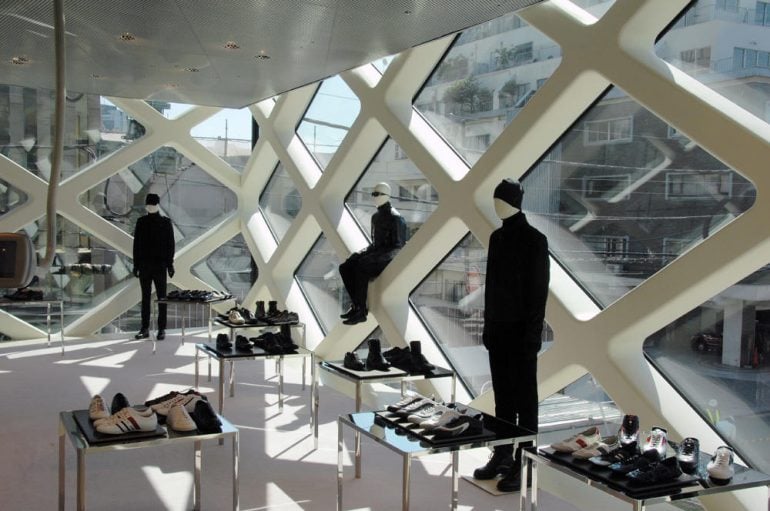 The building appears like a stack of glass blocks and visitors often hit the store solely for the purpose of seeing the building. Inside, every line produced by Prada can be found here, from menswear and womenswear to sportswear and fragrances making it the largest flagship store in Japan. 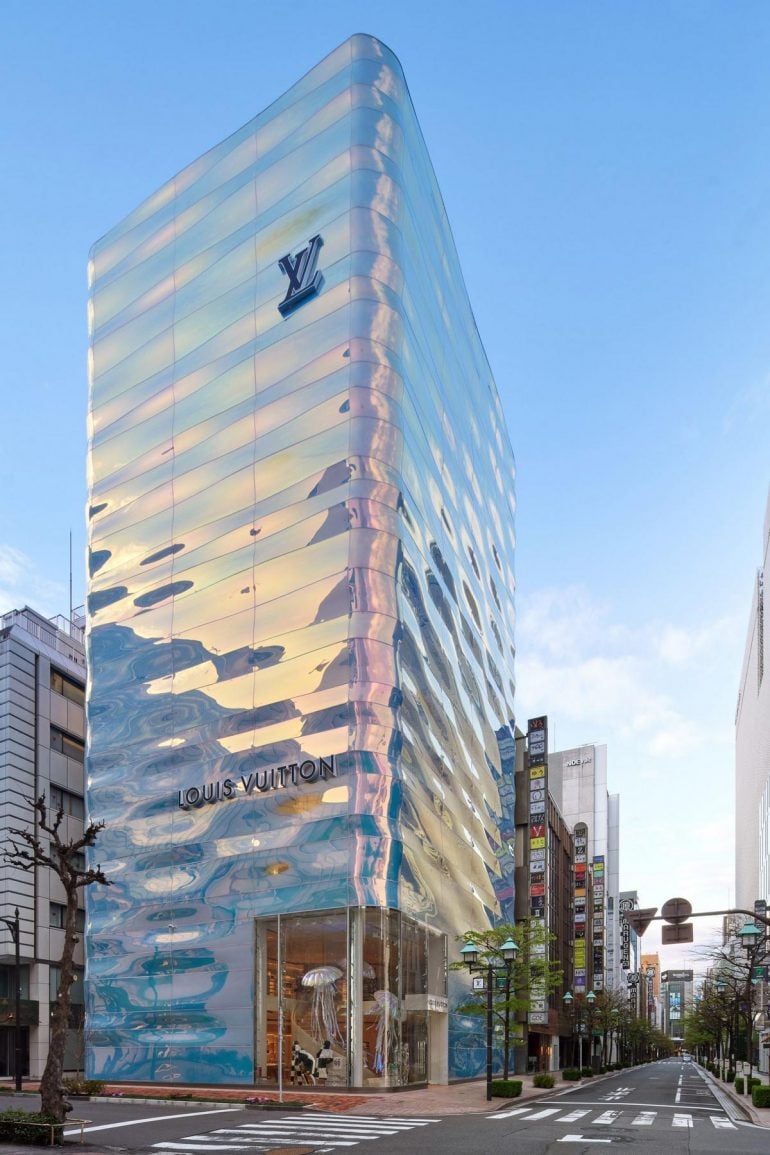 3. Louis Vuitton, Ginza:
Early 2021 saw the launch of Louis Vuitton’s distinctive flagship store in Tokyo’s Ginza shopping district with a surging facade and interiors by architect Peter Marino. The store that is spread over four floors and includes a lounge for VIP customers impresses passersby with its external glass surface that imitates the waves of water with iridescent reflections. 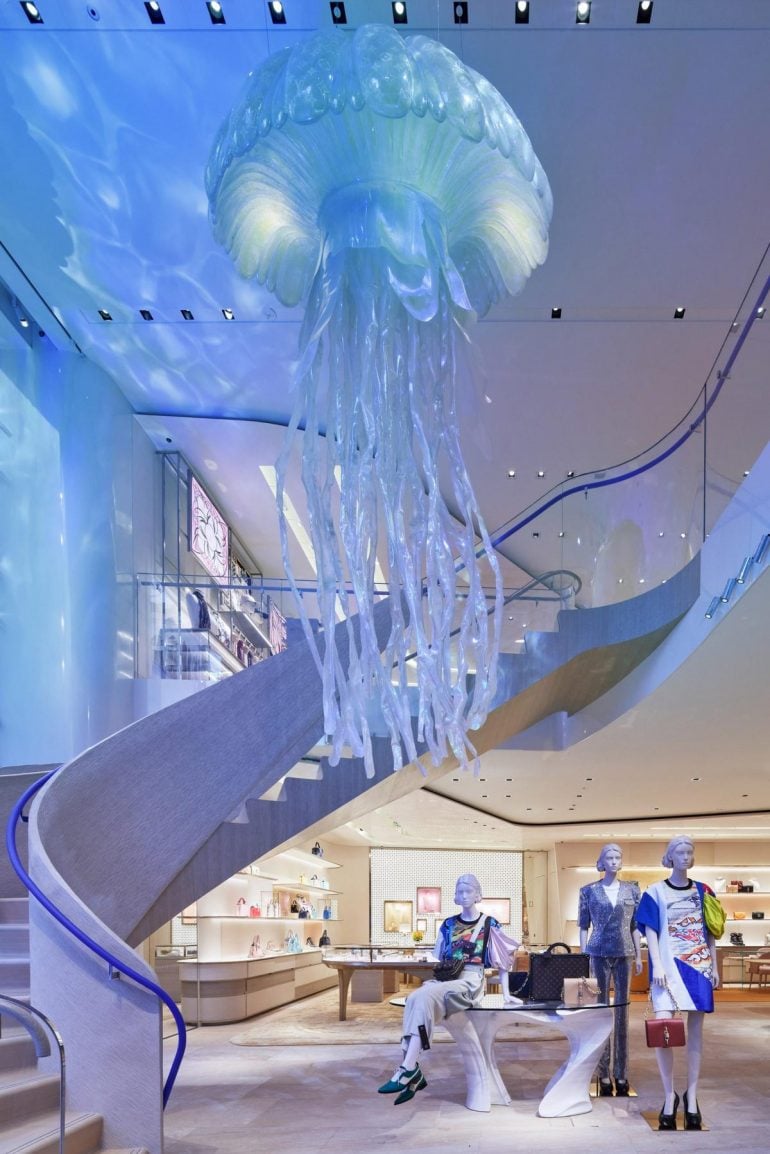 The same idea is echoed inside with a giant sculpture of a jellyfish and equipped with a staircase with the same wavy style. Who could’ve thought that words like poetic, glistening, playful, and rhythmic can be used for a building? “The building’s highly modern appearance interprets the reflections of water as a material phenomenon,” said Louis Vuitton. 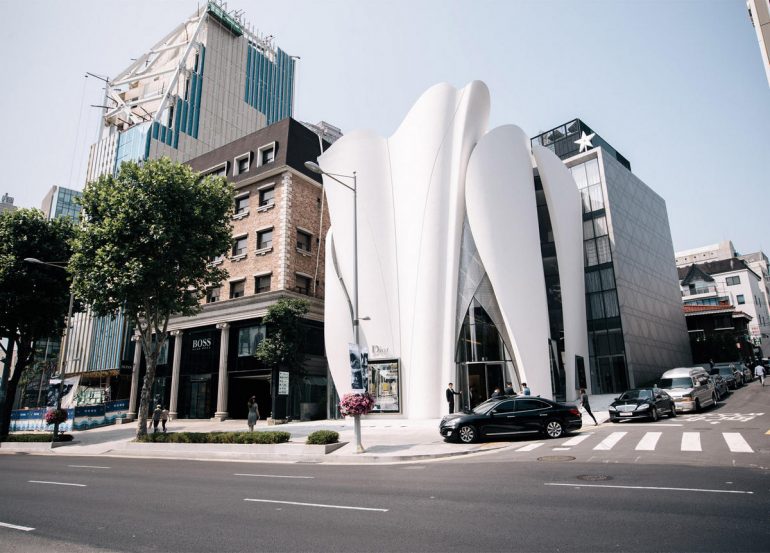 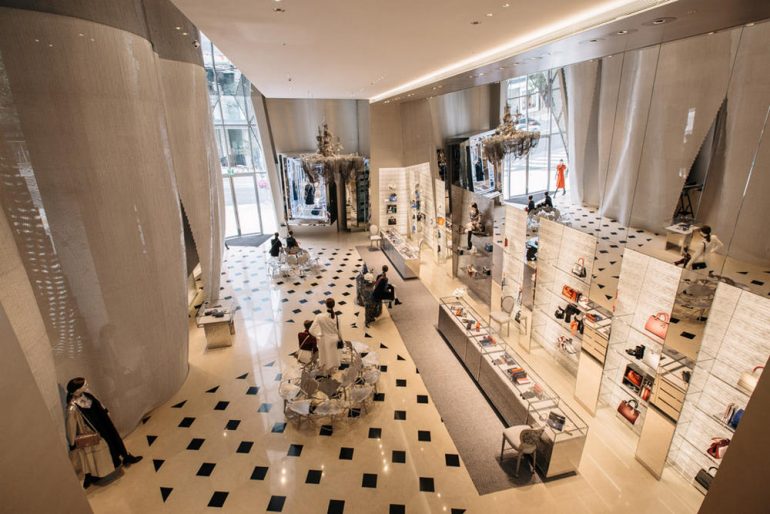 Other than the best of fashion, the building includes Dior cafe serving typically French fare in the form of macaroons and pastries by confectionist Pierre Hermé. Peter Marino has made ample use of mirrored walls and fabric draped candlers to go with the monochrome tiled floors. The interiors are luxuriously glossy owing to glass inserts that help to naturally light the shop floors. A VIP Lounge and Gallery occupy the third floor. 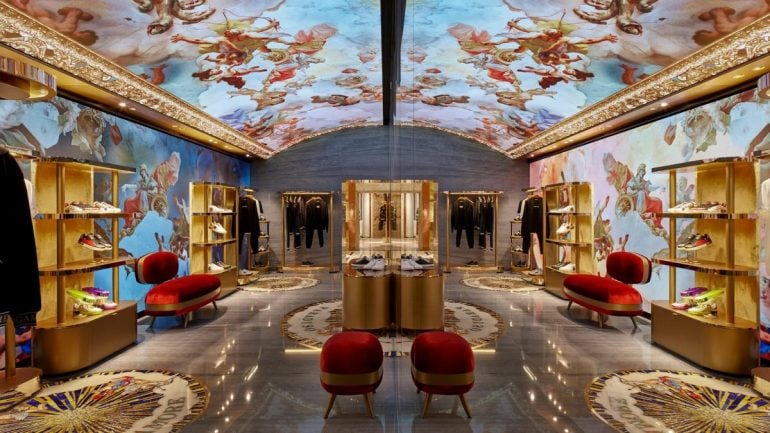 1. Dolce & Gabbana, Rome:
‘When in Rome, do like the Romans do’; This statement aptly describes the superlative D&G store created by architecture studio Carbondale. Not only is it set within a 16th-century palazzo in renowned Roman square Piazza di Spagna, but the Dolce & Gabbana store also holds inside a digitalized fresco. 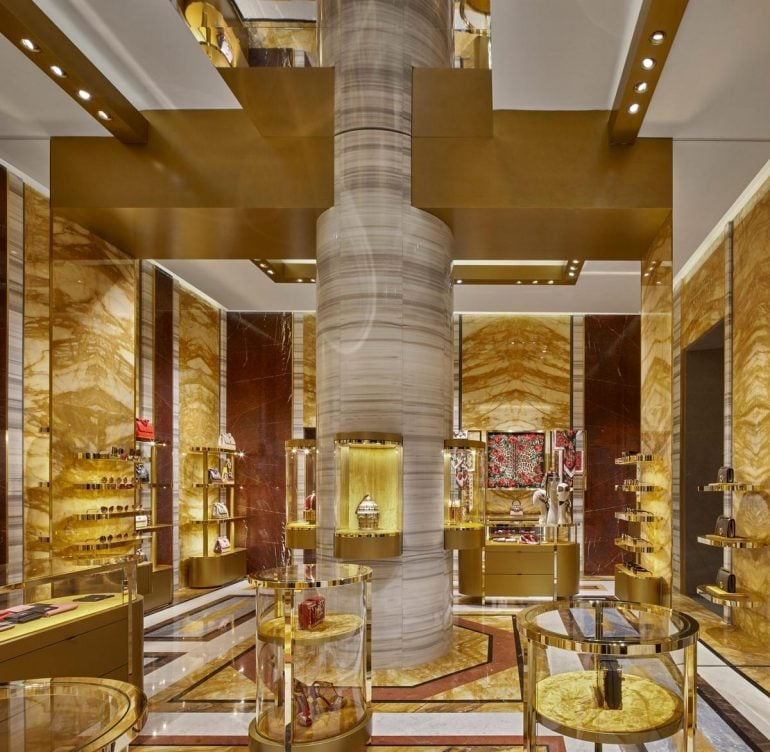 The fresco depicts billowing pastel clouds, cherubs, and Ancient Greek deities Hercules and Athena created by Paris-based creative studio Pastor/Placzek. As impressive as the roof, the floors too captivate shoppers with circular mosaics embedded into the high-gloss floors and inscribed with the words paradise, love and beauty.