Apple is known for making products that are technologically very, very good and designed to be an object of desire barring a few exceptions. The original Mac Pro workstation, which was launched in 2006, is an eyesore in the long line-up of exquisitely crafted products. Some might argue that professional workstations don’t need to look good, but finally, Apple decided to overhaul the looks of its aging Mac Pro completely. Teased at the 2013 WWDC, Apple has finally made its all-new revamped Mac Pro available for sale. And it has arrived just in time for the holiday shopping season. For those who were the early few to book themselves the Mac Pro, Apple will ship it by 30th December, but the current status of delivery for those who book now has already passed beyond the month of March in 2014.
Across all the brands making desktop computers and high-spec workstations, there are rarely any options that can pass as lookers. They all look the same and are ugly. But the new Mac Pro with its radical new cylindrical structure looks amazing. The glossy cylindrical body weighs just 11 pounds and measures 9.9 inches in height. At the starting price of $2,999, the rig comes with a lofty price tag, considering it doesn’t come with a display or even a mouse and keyboard, but the spec sheet is very impressive. The base model comes with a 3.7GHz quad-core Xeon E5 processor, 12GB of RAM, dual AMD FirePro D300 graphics cards, and, oddly, a small 256GB SSD. For more money, Apple gives a chance to the customer to upgrade the hardware to specifications that are arguably the best in the world. Where the specs of the base model are good enough to process 3D modeling and heavy-duty video edition, if money is no object and you wish to own a workstation that won’t get outdated any time soon, the top-of-the-line Mac Pro is just the one for you. For a staggering price of $9,600, the Mac Pro can be customized to come with a 2.7GHz 12-core processor, 64GB of RAM, 1TB SSD, and dual AMD GPU with 6GB of VRAM. 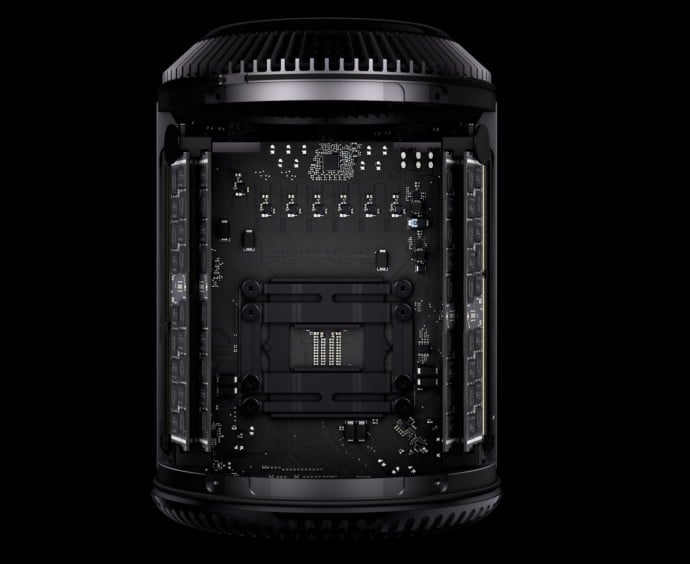 Tags from the story
Apple-Mac