Germany national football team climbed to the number one position of the FIFA rankings after winning the 2014 World Cup last Sunday. While the home country and fans across the world continue to celebrate Germany’s triumph, Beats by Dre has come up with a special gift for all the players of the World Cup winning squad and the team manager to commemorate their success. The rapper/producer and Beats Electronics founder congratulated the team by sending them special edition 24 carat gold dipped Beats Pro headphones. British bombshell Naomi Campbell teamed up with the audio company for the occasion and posed as the World Cup in a photo shoot. Along with a shinny golden Tom Ford dress and Christian Louboutin heels, she wore the champagne gold studio wireless set in a stunning fashion. Beats by Dre commissioned fashion photographer Rankin to create the celebratory human statue, which he titled ‘Golden’. 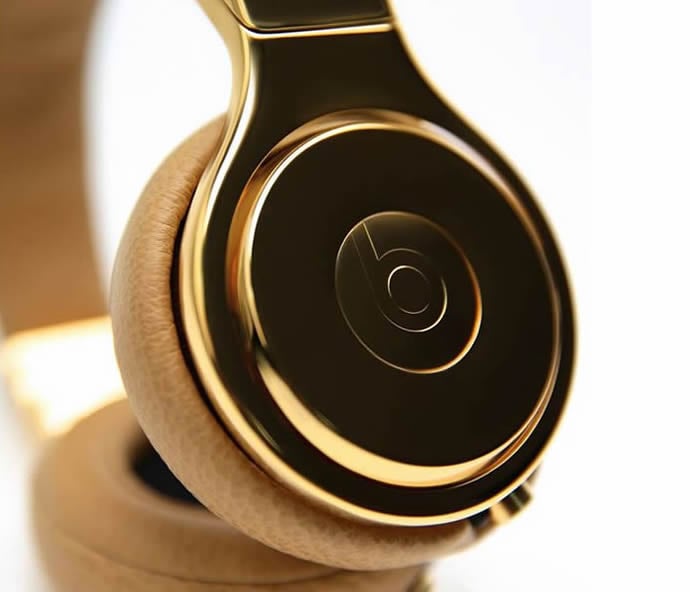 “Working on the Golden project with Beats by Dr. Dre was so much fun,” said Naomi. “The shoot was loud and energetic…I even got to practice my football skills! This was the first time I’ve had the chance to work with the legendary Rankin, so it was a dream shoot.” Beats describes the gilded special edition headphones as “the ultimate prize to go with the ultimate sporting victory.” This is not the first time the audio company has come up with special edition headphones to celebrate a victory in a sporting event. Beats by Dr. Dre had presented gilded headphones to all the players of the USA national basketball team for winning the gold medal in the 2012 London Olympics.