Last week we brought you the news that Hasselblad is going to showcase its new H5X camera body at the Photokina. Alongside the new camera body which is based on the H5D range, the company is going to present prototypes of its brand new H5D-50c medium format camera with a built-in WiFi module. The H5D-50c CMOS unit was launched earlier this year and the new upgrade will allow users to fully control the camera and browse/view images on iPhone/iPad on location via Phocus Mobile software, without the need for a computer. It also features a ‘Live View’ function, allowing photographers to see and zoom in on a live image on the rear LCD even when the camera is untethered.

Michele Channer, Hasselblad International Sales Director said: “When we launched the new H5D-50c CMOS camera earlier this year we promised photographers ultimate image quality, regardless of lighting conditions. Now we have developed a unique Wi-Fi upgrade for this camera enabling photographers to work unplugged but still very much connected.” In addition to the built-in Wifi module, the camera has received firmware upgrade but other than that it boasts all the functionality of its sibling, including a 50Mpixel CMOS sensor and excellent high ISO performance at up to ISO 6400. The new model will be available first in Europe at the end of November and will retail at €21,400 ($27,700 approximately). 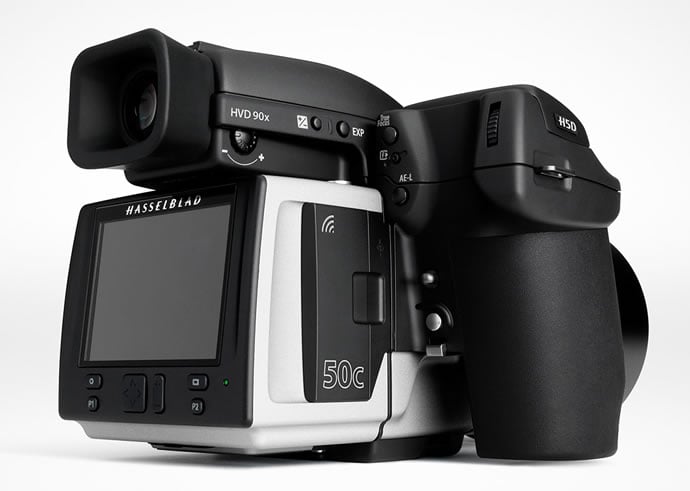 Tags from the story
Cameras, Hasselblad