Motorola’s latest fashion venture is that Aura, which is a stainless steel and tungsten beauty. This swivel phone boasts of a circular display with 300dpi resolution. It displays 16 million colors and is covered by scratch-resistant 62-carat sapphire crystal. It has quad-band GSM/EDGE radios, as well as Bluetooth v2.0+EDR and A2DP. It sports a 2-megapixel fixed-focus camera that also records video. The media player and messaging capabilities are quite cool. The Aura uses an open-source browser and will be available worldwide in the last quarter. At the center of the mechanical heart is a Swiss-made main bearing, which serves as the foundation allowing the blade to rotate with seamless precision. The custom-engineered rotating mechanism has 130 precision ball bearings that drive the assisted-opening blade-like opening the door on a high-end luxury car. On the 100,000th opening, the blade glides with the same fluidity and grace that it did on its first. 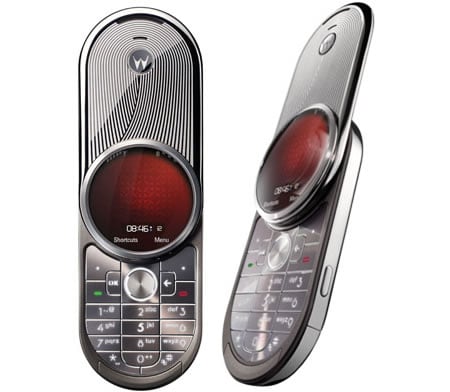 Tags from the story
Motorola