Samsung has absolutely dominated the Android smartphone market for the past several years, but all its flagships are criticized for bearing a cheaply put together, inexpensive look and not having a premium feel to it. To counter the criticism and meet the demands of high end buyers, the South Korean tech giant has had a tradition of launching special editions of its flagship smartphones like the Galaxy SII Crystal Edition. We have already seen quite a few versions of the Galaxy S4 since it was launched last year, and before the device is replaced by its successor, Samsung has launched a premium version of the flagship, black Galaxy S4 and Galaxy mini in Russia.

The most noticeable addition to the black Galaxy S4 and Galaxy Mini is the faux leather rear cover. It definitely looks a lot better than the usual glossy plastic back cover and adds a premium feel to it. The jet black edition of the Galaxy S4 will go on sale only in Russia and won’t be available anywhere else. The changes on the special edition are only cosmetic and otherwise there are no changes under the hood. The black S4 is based on the GT-I9505 model which comes with a Qualcomm Snapdragon 600 1.9GHz processor, 2GB RAM, 5 inch 1080p HD display, 13 megapixel camera, 16GB onboard storage and Android 4.2.2. The Galaxy Mini sports a 1.7GHz Qualcomm Snapdragon 400 processor with 1.5GB RAM, 8 megapixel camera, 4.3 inch qHD display as well as Android 4.2.2. Both the smartphone will go on sale in Russia starting next month but there is no word on the pricing as of yet. 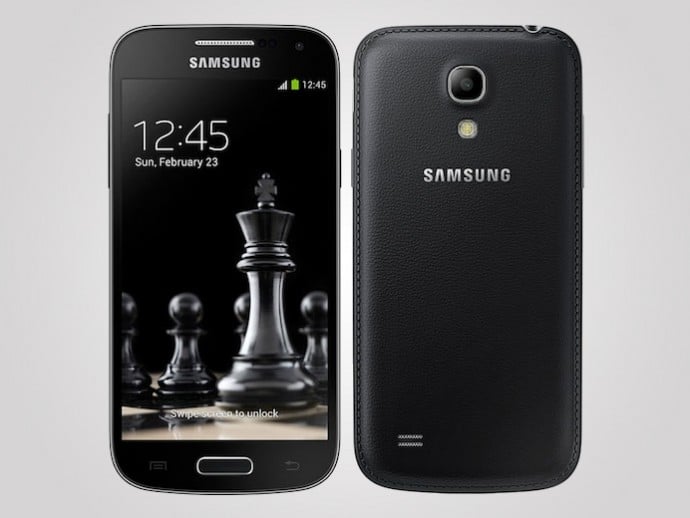