A lot of people will think a robot won’t be able to manage its way around a kitchen. But not only is this feat achieved, by the looks of it, but the kitchen robot by a London-based robotics company will also outshine even those who like to call themselves an established cook. You can’t beat a robot that promises to whip up a choice of up to 5,000 recipes at the press of a button? The Moley kitchen robot even cooks from scratch and even cleans up afterward without complaint. Russian mathematician and computer scientist Mark Oleynik have together created this novel robot developed with the assistance of Tim Anderson, a culinary innovator and winner of the 2011 series of BBC MasterChef. The idea behind creating this not-so-cheap contraption is to get restaurant standard meals without its owner having to lift a finger or order a takeaway. Still, this comfort and luxury will come for nothing less than nearly $3,31,800. People who find cooking fun and therapeutic will laugh at the sum that brings home the Moley kitchen robot and opt to buy a home, a supercar, or maybe even a yacht for that amount instead! Nicole Pisani and Andrew Clarke to create 30 dishes to show what the Moley Kitchen robot is capable of, with more recipes to be added each month. Kicking back and relaxing comes for a considerable price, and surprisingly, the Moley Kitchen robot has already received 1,205 qualified sales inquiries. 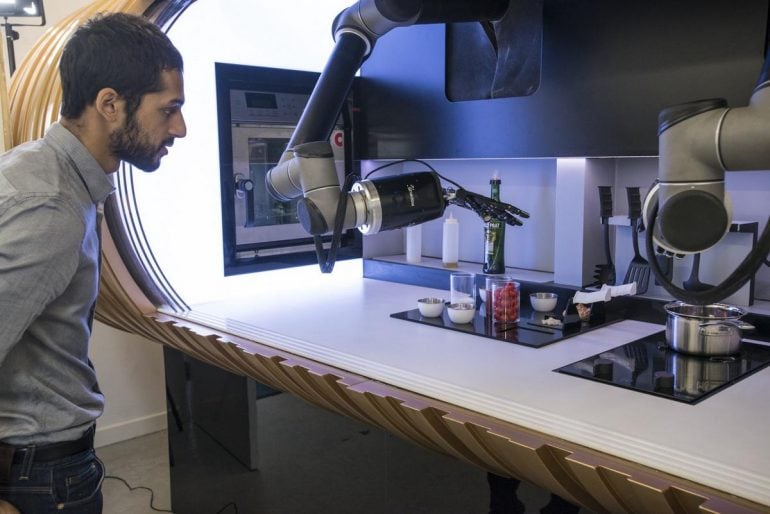 Wondering how it works? The robot is equipped with two fully articulated hands that easily replicate the movements of human hands. This allows the robot to retrieve ingredients from the smart fridge, adjust hob temperature, and use the sink to fill pans and pour, mix and plate up just as a human cook would. Let’s not forget it can easily clean up after cooking up a storm. Oleynik said as he launched the robot kitchen at the Gulf information technology exhibition in Dubai, “What you are looking at here is the world’s first consumer robotic kitchen. Like all breakthrough technologies – cars, televisions, and computers – it will appeal to enthusiasts, professionals, and early adopters and is priced accordingly.

Tags from the story
Kitchen, Robot