Technology is indeed moving into all realms of consumer lifestyle. Interactivity and marketing tools using Near Field Communications, RFID tagging et al are now being employed even by companies that we would least expect. Diageo specializes in items that use this kind of technology and companies like Johnny Walker have already employed their services with a smart bottle feature that lets users tell if a bottle has been opened using RFID tagging incorporated into the label of the bottle and a corresponding smartphone app. The latest company to jump on this band wagon is GH Mumm, the famous Champagne producer.


According to GH Mumm, their new No. 1 Connected Bottle i.e. the world’s only champagne bottle with digital intelligence is a concept that’s been “designed to enhance the celebration experience”. Their new bottle uses a sensor chip built into the cork of the bottle and an FRID tag on the label that corresponds directly with a bar/club’s system. When opened, the sensor triggers a response from its corresponding receiver that’s hooked up to the location’s AV (Audio Visual) array, this in turn will create a very personalized acknowledgement which could include a spotlight on the table, a chime of some kind or some other feature that literally and figuratively shines a light on you, giving you that certain prestige allowing you to flaunt your style… in style. Of course if you’re hoping for a quiet evening, you might want to inform the club in advance lest you come into the “unwarranted” spotlight. 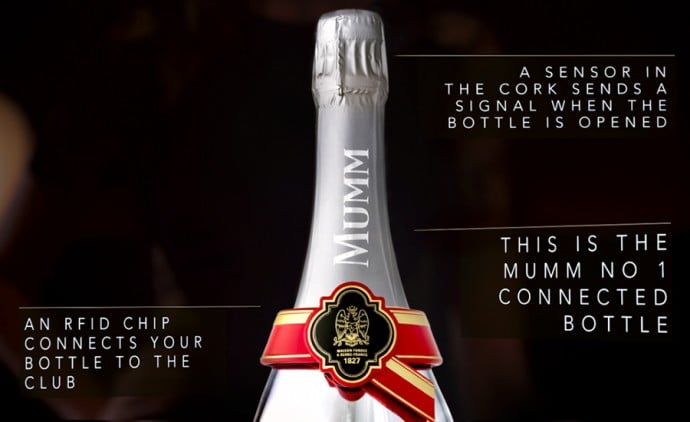 Nevertheless it’s an interesting notion indeed and the company believes that their new interactive, technologically advanced bottle will surely take your celebratory event to the next level. This techno-savvy bottle made its debut at a private event in Monaco and the first ever No. 1 Connected Bottle of Champagne was uncorked by famous DJ slash music producer Mark Ronson. It’s an innovative marketing tool for companies like these and I’m sure this is just the beginning as we can expect to see more like this in the near future.

Tags from the story
Bottles, Champagne