We hear how Paris is now becoming a global melting pot, almost to the extension of intrusion. But there are prettier things too. And palatable. World renowned Japanese culinary maestro chef Nobuyuki Matsuhisa, or ‘Nobu’ stepped foot into the land of gourmet. Le Royal Manceau – Raffles Paris has the honour of introducing Parisians to the delectable taste of Japanese and Peruvian cuisine. Matsuhisa Paris opened in March operated by chef Hideki Endo and a team of skilled sushi masters. 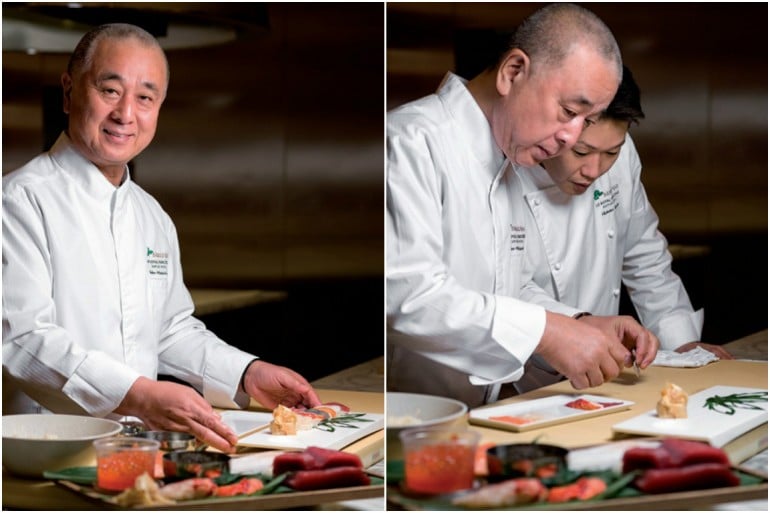 The menu will feature some of Nobu’s iconic dishes like Albacore Tuna Sashimi with Jalapeño Peppers, Black Cod with Miso, and Sashimi Tacos, as well as new innovations by chef Hideki who uses French delicacies that include Algae Tacos with Black Truffle, Crispy Oysters with Caviar, Wagyu Beef with Foie Gras Ravioli and Ponzu sauce or wasabi and aioli sauces. The restaurant will have a 100-seat capacity. Guests can order from ‘Omakase’, an innovative multi-course menu selected by the chef for that day.

Although born and raised in Japan, Nobu is today Japan’s global gourmet face. His culinary uniqueness is that it incorporates Peruvian tastes. Chef Nobu’s tryst with Peru goes back to 1973 when he took up a professional position in Lima. Here he got to introduce Peruvian flavours into typical Japanese dishes because of the unavailability of authentic Japanese ingredients. Over time, he was able to grow it. After travelling about the US and South America for 10 years, he opened his own Matsuhisa restaurant in Beverly Hills in 1987 . He owns 39 restaurants around the world, with Matsuhisa Paris as his sixth Matsuhisa fine dining establishment after Beverly Hills, Aspen, Athens, Mykonos and Munich.

Tags from the story
Nobu, Paris