Stephen Hung, a name that rouses confidence, reeks of the true meaning of being stinking rich and provides aspirations for a life lived by few. He is a man who hails from money, walks, talks, and dresses in money. The world witnessed his rise and vitality from his sassy attire, monumental expenditures, and rich guts. Nobody is perfect, not even Stephen Hung. Among his many successes comes rather prominently a massive failure- The 13. Dubbed one of the most luxurious hotels in the world, The 13, located on the Cotai Strip in Macau, was planned as a haven for the rich. It could not cater to the creme de la creme of the world owing to constant delays. The creditor’s demand for the resort’s parent company to immediately repay $423 million worsened matters. Let’s take a look at Hung’s vision, execution, and the phenomenal fiscal failure of the grand casino resort:

The 13- a metaphor of money, magic, and megalomania:
Five years back, Hung said, ‘Thirteen is my lucky number, and the new name and logo fit perfectly with my vision. There is a hint of tradition while also suggesting a chic and fun edginess.” Located in the gambling mecca Macau, The 13 showed immense promise as the ultimate destination for high rollers. The prominent Baroque-inspired palatial interiors were evident in each of the 200 large suites measuring between 2000 to 30,000 square feet. Guests were treated like royalty (because they are) with 24-hour butler service for every room and a fleet of Rolls-Royce Phantoms. Who else could afford the $100,000 per night room?
To top it all, each villa included a Roman marble bath that fits 8, underneath an ornate Baroque ceiling embellished with a crystal chandelier. The property offered some amenities considered rare even for the super-rich, such as an invitation-only L’Atelier offering couture, the only other branch of iconic French Michelin 3-star Haute cuisine L’Ambroisie. New York architect Peter Marino, the brainchild behind legendary flagship stores like Chanel, Louis Vuitton, and Christian Dior, designed the facade of unforgettable 13 hotel. 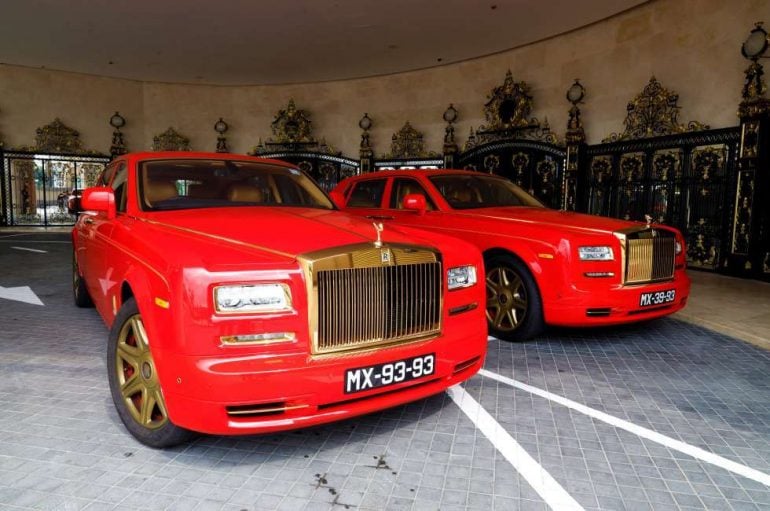 Stephen Hung placed an order for 30 custom Rolls-Royce Phantoms for $20 million in one go
Among some outstanding services offered at the Chinese billionaire’s dream hotel, the one thing that stood out was his fleet of glistening Rolls Royce’s– and 30 of them! The glorious wheels whisking guests in and out came packed with oodles of AU. 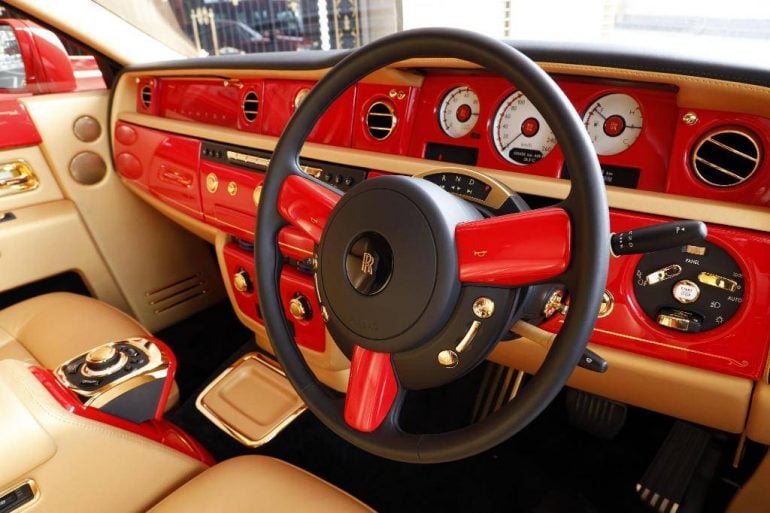 Everything was precious, from gold paint and gold hood ornament (featuring Spirit of Ecstasy) to even tread plates and threads. What’s equally shocking is how the billionaire placed the order for a fleet of 30 in one go for his $1 billion, The 13 hotel.


Incidentally, it was and to date remains the largest single order for Rolls Royce ever. The visionary behind this opulent residence also commissioned the two most expensive Phantoms that Rolls-Royce has ever built.
The 13 comprised stately suites, immaculate butlers, and unmatchable opulence:
No matter how grand a hotel is, it ultimately boils down to the room and experience. Set the property on acres of awesomeness, but the 500 square feet (or in the case of the magnificent 2000-30000 square feet rooms of The 13) is what etches the stay in your memory.
Villa du Comte guest rooms are the smallest split-level mini palaces while the 30,000 square feet Villa de Stephen is the cherry on the cake for a staggering price of $100,000 a night. Needless to say, Hung spared no expense and splurged a whopping $7 million per guest room to make matters genuinely breathtaking.
Other than the grandeur of the rooms packed with retractable marble flooring unveiling a pool, detailed Baroque scrollwork, sculptures, fabrics, and wall coverings, there is impeccable service. Every vision-of-a-villa offers 24-hour butler service. No biggie, every grand hotel does, one may think. But the 13’s team of majordomo was taught by world-famous MCM Palace Consultants and certified by the English Guild of Butlers. From chic attitudes, faultless etiquettes, and outstanding service, The 13 was truly ready with it all. But fate had other plans.
The disastrous downfall of The 13 hotel:
Time and tide wait for none. Constant delays were the primary reason for the $1.4 billion project that started in 2013, with a scheduled opening in 2016 derailed. The 13 Holdings Limited (formerly Louis XII Holdings Limited) faced the first financial blow in July 2016. It was followed by plummeting stocks, which led to even more delays.
While everything looked beyond fabulous where aesthetics were concerned, the financials were a gruesome sight. Not only financials but even the casino license wasn’t secured, which isn’t good news for the world’s best luxury casino resort. With no permit in place, there was no way a large VIP clientele would gravitate toward the Macau property.
Ultimately, The 13 was a project that witnessed money getting pumped simply because so much was already in. These developers played the game like gamblers until they won or ran out of funds. By January 2018, Joint Chairman and Executive Director of 13 Holdings Limited, Stephen Hung, cashed in his chips and departed from the project, which was his labor of love leaving it in the lurch. The 13 opened that same year in September, albeit as a non-gaming hotel. Casino.org reported that The 13 was bleeding money, with an average of only 16 of its rooms booked nightly in its first 12 months.
Things got so bad that the company sold 24 of its 30 red Rolls-Royce Phantoms at a deep discount to pay the bank, losing no less than $125,000 per vehicle. The last straw was the advent of the covid-19 pandemic, The 13 remained closed, and the property has not taken reservations since. Who knew something this wonderful would become waste?
Did The 13’s extravagance lead to its doom?
Undoubtedly, The 13 would be ranked among the top 3 most expensive hotels in the world had it survived the pandemic and perpetual financial ordeals. It’s easy to think that ultra-expensive room charges would lead to less occupancy and, therefore, ultimate property failure.
But the planet’s super-rich is increasingly comfortable spending thousands of dollars for a night of comfort and respite. The Lover’s Deep Luxury Submarine Hotel in St Lucia takes the number one spot with sky-high rates of $150,000 a night. This is followed by the Palms Casino Resort Empathy Suite, in Las Vegas, for the same $100,000 a night. For $80,000 a night, guests can occupy the entire 8th floor of the Hotel President Wilson Royal Penthouse Suite, Genève, Switzerland. That 8th floor is spread across a measly 1,680 sqm, nearly half the size of Villa de Stephen.
The one thing I fathom that went against The 13 is that compared to other hotels that offer one or two or even ten such grand suites, The 13 was chock-a-block with 200 such high-maintenance mini-palaces. Unfortunately, with no license and lack of footfall, it was preordained to fall. Add to this several issues with investors and the harsh criticism of the Chinese government frowned upon the excessive spending and overall concept of this space.
Meet the fashion-obsessed entrepreneur Stephen Hung:
The above text may compel you to think Hung is a distraught businessman down the dumps after such a catastrophic failure. The reality couldn’t be more different. The Chinese tycoon, worth $400 million, is as eccentric and confident as they come with a new endeavor in place. His OTT persona, zipping around in supercars, a stunning model-wife will be put on full display as the wealthy 63-year-old is apparently filming the Netflix hit “Bling Empire.” Looks can be deceptive, and it may seem challenging to take Hung seriously. Raised in an upper-class family, some of his wealth was inherited, and the rest was self-made. Still, the man studied medicine at Columbia University, then moved to the University of Southern California and obtained his MBA in business administration.
Hung was the co-head of investment banking for Asia with the globally recognized Merrill Lynch. He became the Vice Chairman at eSun Holdings and put his efforts into developing his own investment company. Stephen continued to thrive as AcrossAsia Limited’s director and excelled in the industry. He finally made a mark with Louis XII Holdings Limited, which launched The 13 hotel and became a drain of finances and resources. Hung is married to the stunning Deborah Valdez-Hung.
Tags from the story
Fails, Macau

Curves and angles like no other – China has built the world’s most twisted skyscraper.

Hermes is all set to enter the Metaverse