A new era of love has dawned, and it’s called the Charles Tiffany Setting after Tiffany’s founder, Charles Lewis Tiffany. When luxury jewelry brand Tiffany & Co. starts selling men’s engagement rings for the first time in its 184-year history, it can be christened a new epoch. The world as we know it has evolved by leaps and bounds in the past 50 years, and we now have same-sex marriages globally and gender-fluid fashion trends that didn’t exist a few decades ago. This opens a new market for Tiffany and their sought-after high-end jewelry. The collection features round-brilliant and emerald-cut diamonds that measure up to 5 carats. Tiffany is treading a new road with a new concept and ditching the traditional wedding band by introducing a striking center diamond in either a titanium or platinum setting. In a press release, the brand honors the jeweler’s long-standing legacy in love and inclusivity, paving the way for new traditions.

“Designer Narcisa Pheres said that she found the idea of women proposing to men quite romantic, “You see on the red carpet men wearing huge Baroque-style brooches or big diamond rings, necklaces (and so on)” she said. “The biggest influence obviously (has) been (the) music industry, pop art and lots of the young celebrities or influencers wearing more and more fine jewelry in public. Gender fluidity is a social trend, not just for jewelry, (and) we will see much more of it.” Starting next month, Tiffany said the men’s engagement rings would be available at select stores globally. They’re already available for sale online. 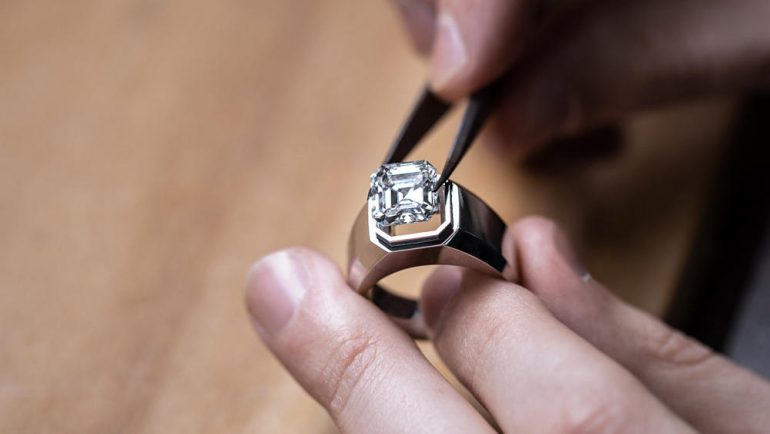 Tags from the story
Rings, Tiffany