Call it ‘War of the heights’! It’s not only the skyscrapers that are outstripping each other in being the “tallest in the world”. Lately all the countries across the globe are building or have already built the ‘tallest’ Ferris Wheels. Only to know in a few months that some other country is making a wheel that will be about 20-30 meters taller than theirs. It all started with the London Eye at 443-foot. Ideally dubbed as “Britain’s Eiffel Tower” and located on the banks of the River Thames in London, it is the largest of its kind in Europe. And it is the world’s “second” largest, behind China’s “Star of Nanchang” at 525 feet. But to strip them of their ranks, the 541-foot Singapore Flyer will rise to fame in early 2008, followed soon after – in time for the 2008 Summer Olympics – by the 682-foot Great Beijing Wheel. Similar “observation wheels,” a name that has come back into vogue, have recently opened or are being built in Malaysia; Manchester, England; and Melbourne, Australia, with others planned for Berlin; Dubai, United Arab Emirates; and Orlando, Florida. Figures say that on average, about 3.5 million people a year, or 10,000 a day pay $30 or more for a half-hour spin on the London Eye. The Singapore Flyer will be able to carry 27,000 passengers a day, with each ride costing about $20, or more for options like express boarding or Champagne. Although the Flyer is not scheduled to open until March, its first three months are already fully booked. And if you are worried about motion sickness then stay at ease as these spin so slowly that passengers can board without the wheel’s being stopped. 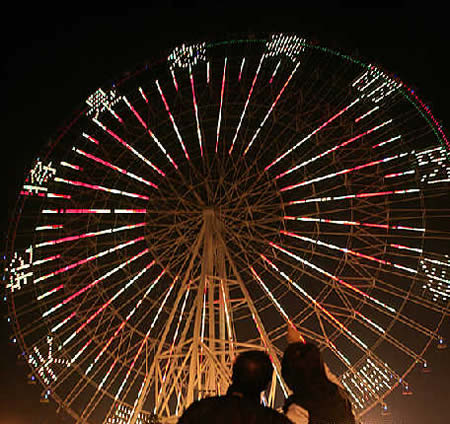 They also feature climate-controlled, rotating capsules that can hold up to 40 people and can be reserved for business meetings, birthdays, and weddings. Capsule amenities include leather seats, plasma screens, refrigerators, and bars. The 394-foot Sky Dream Fukuoka in Japan even advertises this lazy pace as a selling point – it helps ensure “maximum kissing time.” Excellent marketing idea! If you haven’t sat in one of these spinning wheels then the least you can do is hop into one soon….cause it’s the latest rage!