`Investment Not Art’ is rightly defined with this Platinum and Diamond Skull. Damien Hirst, the U.K.’s wealthiest artist, is part of the investment group that is buying his diamond skull for $100 million and plans to resell it later. The skull, cast from a 35-year-old 18th-century European man but retaining the original teeth, is coated with 8,601 diamonds, including a large pink diamond worth more than four million pounds in the center of its forehead. 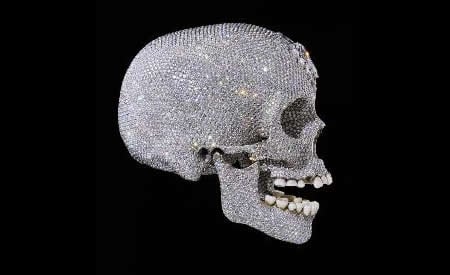 It was on the market at least since June 3 when it went on the show with other Hirst works at Jay Jopling’s White Cube. This skull cost around $20 million to make. The work, titled “For The Love Of God” will be going on tour to museums and galleries around the world. Many may dismiss it as tasteless while others may see it as a reflection of celebrity-obsessed culture.
Source