Ginza Tanaka is known for his incredible Gold sculptures, his creations are quite often whimsical as seen in his solid gold Stitch statue. These intricate solid gold creations are quite expensive with a pure gold Santa selling for 200 million yen. His latest creation is an ode to Lionel Messi or more specifically to his left foot. He is one of the greatest footballers the world has ever seen and has won the prestigious European Golden Shoe award twice. The solid golden foot created by Tanaka is an exact replica of Messi’s left foot and weighs approximately 25 kg. Much like Messi, this sculpture is one of a kind and only one piece has been created.

Japanese Artist Ginza Tanaka designed the sculpture, but it was created in Spain, which happens to be where the Argentian footballer gained recognition. The sculpture was created in 2012, which was the ideal year for Messi has scored a record-breaking 91 goals for FC Barcelona.

The entire foot measures around 25 x 28 x 16 and will be sold for a whopping $5,250,000. In a video message played at the unveiling of Lionel Messi, he felt incredibly honored to have his foot immortalized in gold. 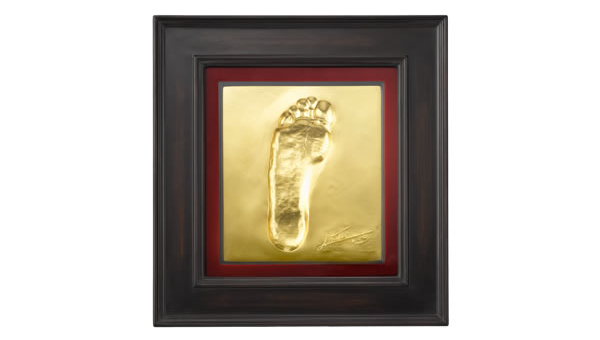 Tanaka has also produced a golden plate imprint of the superstar’s foot that will cost $94,500 and has been limited to 50 pieces.

For those who don’t have $5 million to shell out, there is also a miniature version of the solid gold foot available for $42,000 and limited to 100 pieces.

Tags from the story
Gold, Sportstars