If the 3,599-piece Lego Technic kit of the Bugatti Chiron wasn’t awesome enough, the iconic toy company has gone ahead and built a full-size replica of the $2.5 million hypercar made largely out of Lego bricks. And guess what? The full-size Lego Bugatti Chiron is fully functional and the French carmaker’s famous test driver Andy Wallace drove it down a race track in Germany. “This life-size model is a first of its kind in so many ways, and with it, we wanted to push the boundaries of our own imagination,” Lena Dixen, Senior Vice President of Product and Marketing at the Lego Group, said in a statement. 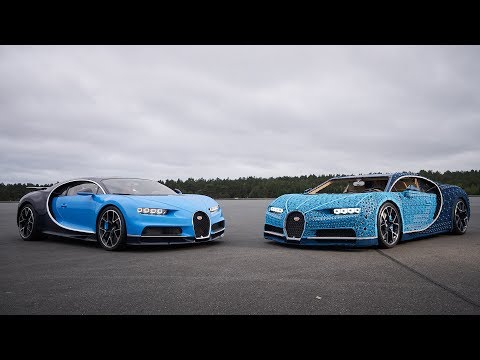 More than one million Lego bricks were used in building the replica and it took over 13,000 hours to complete. It was designed and built by the same Czech Republic-based team that specializes in creations for Legoland attractions. The team started brainstorming back in June of last year, with actual construction beginning in March of 2018.The car was built by hand, connecting each brick to the next without the use of any kind of adhesive. “For over 40 years, Lego Technic has allowed fans of all ages to test their creativity with a building system that challenges them to go beyond just creating new designs, to also engineering new functions,” Dixen said. The team also had to use some non-Lego part in the construction of the functional replica that weighs 3300 lbs. it is powered by two batteries that drive over 2,300 Lego power function motors and over 4,000 Lego gear wheels that transfer power to the vehicle. It gets 5.3hp through the motors that can propel the car to a top speed of 12.4mph.