Because there wasn’t enough Hello Kitty insanity occurring in the world, Sanrio resolved to double our trouble by delivering Yoshikitty into our mundane lives. The features are the same and there’s no relief from that oval nose haunting us, although the personality serves a good break from the pink glut. To be honest some aspects are admittedly cute like the half-spiky half blonde hair and the adorable white wings. It’s Yoshikitty’s 10th birthday this year and like all other incredible Japanese celebrations, this one is celebrated in a big way too. Japan Music Agency Co., Ltd. (JMA), Sanrio, and X Japan are making a grand gesture and letting fans become part of this by unveiling an 18K Yoshikitty figurine. Fans aren’t suspecting anything less either as they know Yoshiki and Yoshikitty seldom do anything cheap. They teamed up with Tanaka Ginza Jewelry to make a very special product. 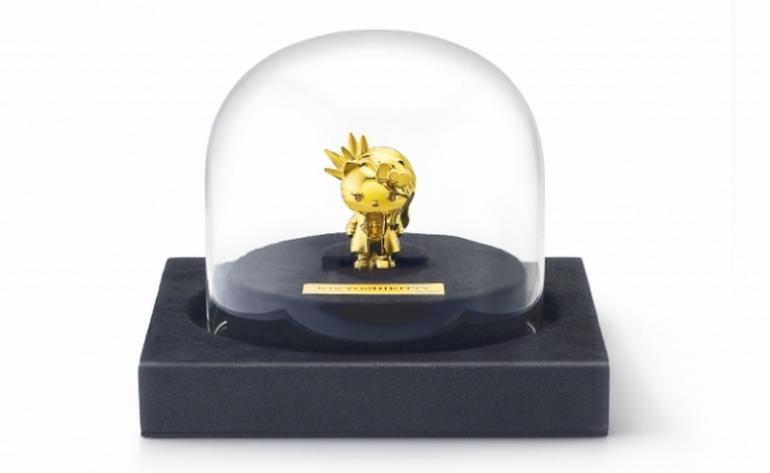 The “K18 Yoshikitty” as it’s called, is a 1.6-inch figurine made of 1.2 ounces of solid 18 karat gold. The figurine exacts Yoshikitty’s signature hairstyle, eye shadow, and coat with the official X Japan logo on the back. Something invaluable like this obviously comes encased to avoid any damage or scratches. Only 100 of these babies are available and they come in a neat, safeguarding case. The K18 Yoshikitty figure costs a staggering 1,100,000 yen (US$10,130), tax and special case included. If you really want to make Yoshikitty happy on her birthday, you know what to do.

Tags from the story
Gold, Japan