Everything has a price, and when it’s one of the best, that sum only gets heftier! Russian billionaire and playboy Mikhail Prokhorov was willing to pay $439 million for a majestic villa on the French Riviera back in 2010. Per the inflation calculator, that amount equals nearly $567 million today. To ensure the kingly estate Villa La Leopolda (King Leopold II of Belgium once owned it) landed in his lap, he put down a $44 million deposit to become the owner of one of the most expensive houses in the world. No, he didn’t get the house thanks to the global credit crunch, and things got particularly expensive, even for a billionaire, as not only did he get zilch back from the ten percent down-payment but had to shell out an extra $1.2 million in interest.

That’s the way of the French! As per French property law, once a sale contract has been signed, a deposit can only be refunded during a seven-day ‘cooling-off’ period, shared Daily Mail. A court in Nice ruled in favor of Villa La Leopolda’s owner, 71-year-old Lily Safra, who got to keep her home and a couple of extra millions; A classic case of ‘what is not meant for you will never be yours.’ Billionaire businessman Prokhorov made umpteen attempts to purchase Villa Leopolda via Belgian real estate entrepreneur Ignace Meuwissen. Lily Safra finally gave in to an offer for nearly $440 million plus an additional $20 million for the villa’s furniture in the summer of 2008. The home wasn’t meant to be his, but the damage was. 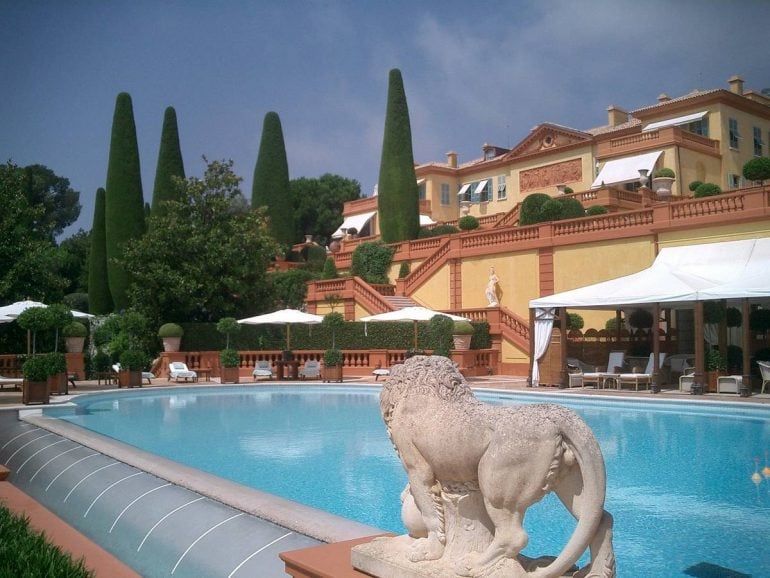 The extravagant Villa La Leopolda, a sight for sore eyes:
Fairytales are eternal, and the Villa La Leopolda is a real-life fairytale when it comes to heavenly abodes. Perched on 18 acres of land, this fit-for-a-monarch mansion was gifted by the 65-year-old King Leopold II of Belgium to his 16-year-old mistress. By 1919, French aristocrat Thérèse Vitali, Comtesse de Beauchamp, acquired the property. The house went through several noble families before finally becoming home to Lebanese-born Brazilian banker Edmond Safra and his wife Lily in 1987. Renzo Mongiardino, the award-winning Italian architect, was entrusted with opulent interior design.


The home has no less than 19 deluxe bedrooms, 14 bathrooms, and antique furniture, costing millions. Considering the large and extravagant parties the Safras hosted, all this room was certainly well used. Villa La Leopolda may look like an ancestral property, but it is not dated, and every new owner has given the house an upgrade and a touch of modernity. The interior boasts a bowling alley and a movie theatre to balance the geriatric artworks and valuable marble sculptures that provide an ancient vibe to the luxurious villa.
Villa La Leopolda enjoyed a cinematic presence
Not every day a home is given the stature of a monument, and Villa La Leopolda certainly grabbed the glance. The sprawling house was first featured in the 1948 film ‘The Red Shoes,” followed by Alfred Hitchcock’s 1955 movie ‘To Catch a Thief’ starring Cary Grant and Grace Kelly.
About Mikhail Prokhorov:
The Russian billionaire worth $11.3 billion today owes most of his wealth to metals giant Norilsk Nickel, the world’s largest producer of nickel and Palladium. The former owner of the Brooklyn Nets (he sold a 49% stake to Alibaba executive Joseph Tsai in a $2.3 billion deal in 2018) graduated from the Moscow Finance Institute. After dabbling in management at the International Bank for Economic Cooperation, Prokhorov served as head of the management board of the MFK bank, his first major financial success. Another billionaire, Vladimir Potanin, played a key role in his life. Prokhorov created Russia’s largest closely held commercial bank, Onexim, with Potanin.
Prokhorov also was the former chairman of Polyus Gold (a spin-off from the gold assets of Norilsk Nickel). The business partners have more in common than precious gold, Palladium, and nickel; they both own stunning superyachts and are close to the Kremlin. While Potanin is known for his $300 million Nirvana superyacht, Prokhorov also owns an astonishing $230 million superyacht dubbed Palladium (no surprises there).
Tags from the story
Billionaires, France, Mansion