With magnificent volcanic mountains, black sand beaches and the fact that the Balinese still worship the supernatural, it’s no wonder that Bali is known as the Island of the Gods. Even its name rolls off the tongue beautifully. But there is one place in particular on the Bukit Peninsula of the rugged island that, perhaps, is a little bit more magical.

Perched 150 metres over the vast Indian Ocean, the Bulgari Resort Bali is “a veritable emblem of the tropical exoticism of the Orient.” After the successo pazzo of their first hotel in Milan, the jewellery brand chose an entirely different setting for their second property. Marrying the unspoiled nature of its unique resort location, the blend of traditional Balinese style with dramatic contemporary Italian design, and the quality of services and detail that have consistently distinguished the brand, the result is a triumphant meeting of East and West.

Located near the famous Pura Luhur Uluwatu Temple, the regal resort teeters on cliffs that offer unrivalled views of the sea. There are 59 villas, including three two-bedroom villas, a 1,300 sq-m Bulgari Villa and five mansions with three to five bedrooms each. There’s also an oceanfront spa, a chapel, three restaurants and a bar, meeting facilities, a cliff-side pool and a beach club.

The Ocean View Villa, where I stayed, is one of the resort’s smaller villas with more than enough room for two. Like many of the island’s luxury accommodations, guests often step into a tropical garden in their personal compound before entering the main villa areas; and mine was no different. Under a thatched roof, I glanced an open-air living and dining pavilion, a private plunge pool, and lush flora and fauna surrounded by high-walled natural lava and palimanan stones. A direct view of the Indian Ocean in the horizon in all its vastness and blue beauty completed the picture perfect setting of my spacious private space. It was idyllic.

Stepping inside, a work desk in an alcove first greeted me, followed by separate his and hers closets and the master bedroom. Floor-to-ceiling glass windows surrounding the suite revealed more tropical plants. The sombre-hued interior was warm and homey, with furniture made with refined bangkiray hardwood and a collection of Balinese antiques and exotic art pieces. I noted Bang & Olufsen audio/video systems all around. My personal butler, Yadi also pointed out that in the closets, ladies were provided a rattan bag, fan and sun hat to use during one’s stay. Men, on the other hand, were provided more practical items like mosquito repellent and a torchlight. This tickled me and I thought it was a lovely touch, although I made an instant grab for the mosquito repellent.

“The resort is divided into seven communes termed as “banjars”. Each banjar is attended by butlers to anticipate guests’ needs and offer an ‘invisible service’. In the case of my butler, Yadi, I’d never met a more enthusiastic and amiable service member.”

Perhaps the highlight of the villa, however, was my volcanic black stone bathroom. Its space rivalled that of the bedroom — under its own thatched roof — with black Terrazzo flooring, more floor-to-ceiling windows, an outdoor shower, a huge tub that rose in centre of the room like a monumental altar, and an indoor shower. There was also a dressing table, a corner couch and an amenities side table. It was here where I really appreciated the quiet, secret atmosphere of the villa, ensuring maximum privacy thanks to walled separations everywhere I turned. No other place I’d stayed in had offered such an open concept bathroom. Under the bright sink lights, I noted green accents and details — from the dark glass water bottles, to the bar soaps and bath salts, and even to the frosted glass cups. I later realised that this shade, along with the mahogany wood colouring, was the domineering colour scheme in the resort.

In the evening of my first night, I ventured out of my room for cocktails and dinner at The Bar and the hotel’s Italian restaurant, Il Ristorante respectively. Just in time for the Balinese sunset, I chose a seat by a terrace overlooking the island’s famed Uluwatu cliffs. There was also a wedding party taking pictures after what I assumed was an evening ceremony, and I couldn’t help but think that the romantic setting provided the perfect backdrop. As I sipped my beverage and nibbled on complimentary canapés and snacks — all in keeping with the Italian tradition of the aperitivo — I observed the bar staff working behind an ellipse arch counter under the watchful eye of a massive stone sculpture. I decided to look up the bar online and was pleased as punch to discover that the very spot I was sitting at was the highlight of the entire resort. In every website I browsed, a picturesque image of the bar was featured. Its surrounding pond gave the impression that the venue was floating in the water.

“The curved black resin counter at The Bar is actually modelled after the Bulgari Hotel’s bar in Milan. The art piece was apparently found after a huge earthquake in North Sulawesi.”

After, I made my way to Il Ristorante and was seated at a table overlooking the reflection pool around the bar. The open-air bale-style structure seats 36 and pays homage to classical Italian specialties in a seductive ambience enhanced by suggestive soft lighting. Interestingly, the structure is divided right down the middle where a water feature with pots of purple orchids provided spots of colour in the space’s monochromatic expanse. Helmed by Italian Chef de Cuisine Nicola Russo, he and his team bring creative reinterpretations of classic Italian dishes to the table, where ingredients are imported from Italy and combined with local organic produce. The menu offered two wine pairing sets, but I opted for à la carte, choosing a beetroot and burrata cheese antipasti, followed by a lamb ragu and paccheri pasta — two of my favourite Italian foods. The food was sublime and hands down, the best ragu I’ve ever had.

The service was also impeccable — from being asked if I’d like my pasta made al dente or well cooked, to my water never falling below the halfway mark. Attention was promptly paid to every detail and request. For dessert, I ordered a tiramisu and tea, enjoying the “frog orchestra” that burped in the pool below. When I got up to retire for the evening, I stood in the middle of the divide and looked up to gaze at a canopy of stars, feeling replete and content.

The next morning began with breakfast at Sangkar restaurant, the all-day dining venue. Sangkar means “cage” in Indonesian and I quickly caught on to its name when I saw various traditional rooster cages used as décor. Like all the great seating spots I’d already snagged the day before, the hostess gave me a corner table facing the sea. Though there was an à la carte menu — truffle scrambled eggs were tempting — I went for the buffet, which was more than adequate. Along with the usual fruit, bread and American breakfast dishes, my favourite counter was the pick-and-mix noodle station. Unlike at most hotel buffets, my noodle and egg orders were brought to my table, negating the need to stand and wait. And just before the buffet closed, my server graciously brought more sausages and bacon to me, “just in case [I] wanted more.” The service was just getting better and better.

For the rest of the day, I explored the hotel grounds. Post-breakfast, I took a ride down the resort’s inclined funicular to the La Spiaggia beach club, where I said hello to two monkeys — the resort’s local residents. The coral-strewn, talc-white beach was located further below, but was inaccessible both from the 150-metre cliff I descended down from and the sea, due to the reef. Nevertheless, it looked pristine. 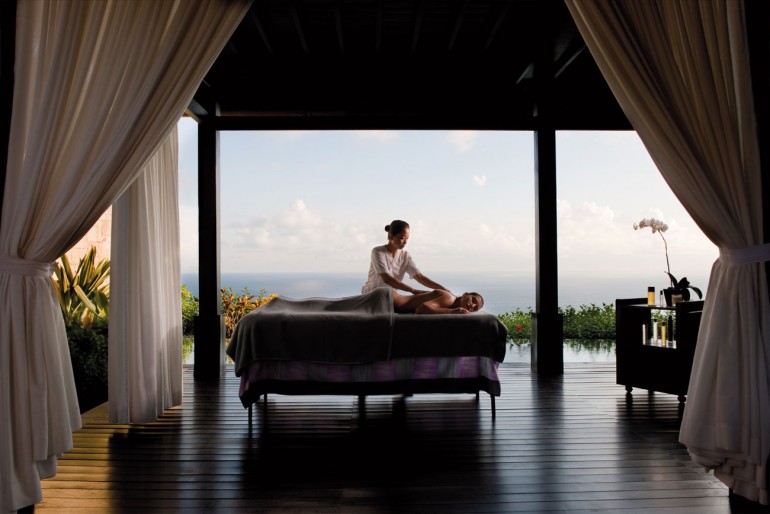 After a spa session, I whiled away the rest of my time swimming in the hotel pool and reading on a shaded canopy bed. Boasting an infinity-edge, fuschia pink bougainvillea flowers and giant trees shadowed the green-coloured sukabumi stone pool. Bottles of aloe vera, sunscreen and face mist were also thoughtfully placed on every table and every guest was served iced water the minute they sat down. I needn’t have made lunch plans too, as I was served snacks and fruits once every hour. Heading back to my room at nightfall, I decided to skip the buggy ride to walk off what I’d ate.

“I couldn’t remember any other hotel that so generously provided complimentary food just because.” 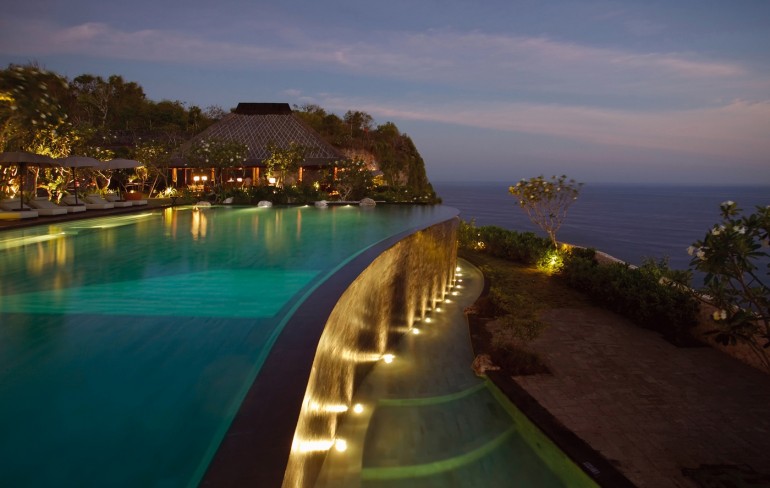 Knowing it was my last night at the resort, I tried to commit to memory as much of the place as possible. Around the lush foliage and frangipani trees, the landscape is designed with an eye to the traditional Balinese yards and gardens. Buggies are used to ferry guests everywhere due to undulating terrain but this is because the hotel’s designers wanted to follow the ground’s natural inclination. As I passed by the Bulgari boutique — the first and only store in Bali — I came to a corner where I looked down a cobbled pathway flanked by a high wall in bukit stone on the right, and a row of exotic wood villas on my left. The air was balmy, the sun was setting — lighting up the sky with a rich golden light — and drooping pink bougainvillea framed my line of sight.