Opened in March last year Hotel Eclat is housed in Parkview Green, a pyramid shaped glass structure which resembles a Louvre from the future. Staying at the Eclat is like staying in a luxurious modern art museum and as we realised it is one of the few places which just cannot be effectively described in words or captured in images, it has to be experienced. 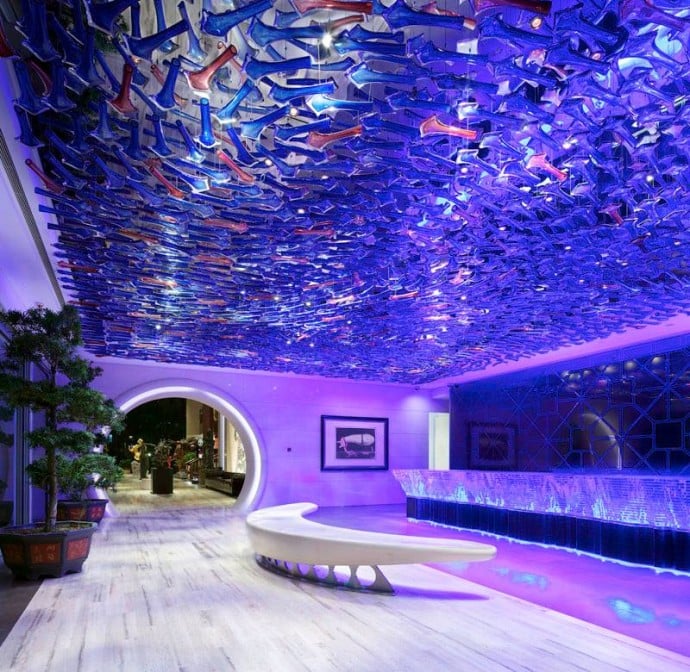 First impressions –
Parkview Green is a multi use complex which houses office spaces, a shopping mall and the 100 room Eclat which occupies the 16th to 21st floor. The eclectic lobby is innovatively lit and features original artwork by Andy Warhol, Salvator Dali, Zeng Fanzhi and Chen Wenling. Matching the look of the lobby are metallic cuckoo clocks, about half a dozen of them are hung behind the reception which go off at random intervals.


The lobby lounge of the hotel or ‘The Gallery” is an exceedingly stylish setting home to Steampunk sculptures, modern artwork along with masterpieces by Chen Wenling, Zeng Fanzhi, Zheng Lu and Dali. Greeting us at the entrance was ‘The Giant Panda’ an Andy Warhol masterpiece, one of the ten focused on endangered species.

After exploring the gallery we were escorted by to our Deluxe room on the 17th floor.


Rooms / Accommodation –
Each of the hotel floors has an individual theme achieved by the meticulously placement of artwork along with innovative design. Knight armor, shields and door knockers gave our floor an early Victorian look. Though a bit compact our 35 sqm (350 sq-feet) room was thoughtfully designed, extremely cosy, and loaded with the latest in technology. Our room had a 46 inch 3D TV, Blu-ray player, a Panasonic massage chair which proved to be a boon after the sightseeing trip, an Oregon Scientific weather station which projected the time and weather conditions on the ceiling and a large Bang and Olufsen iPod dock. Coming to the design elements the writing desk had a Phillippe Starck Ghost chair but the showstopper for us was the bedside lamp controlled by a laser gun.
Scattered across the room were switches with large illustrations telling exactly what they would do. The room had an Illy coffee machine and a complimentary mini bar which had a limited selection of bottled water, local beer and soft drinks.

Like the room even the bathroom was a near perfect mashup of clever design and technology. Stocked with Miller Harris toiletries it has a large soaking tub, head shower and the best of it all a polyvision glass between the bathroom and the main room which in its normal state is transparent but with the flick of a switch turns foggy for privacy. Equally exciting was the Toto Neorest an automatic toilet which had its own remote control and was equipped with a nightlight and sensor which automatically popped up the seat as you enter the room.

The remote controlled lamp and polyvision glass in action.


Eclat Lounge –
Scattered with large photographs of government buildings and traditional Chinese red lanterns the 16th floor of the hotel had a turn of the 19th century. It also housed the Eclat lounge which served light rotating refreshments, hot beverages throughout the day along with select liquor during happy hours. Being Hotel Eclat there had to be a quirky element and it was in the form of a popcorn machine, although I never fancied but a latte and popcorn do go well together. With floor to ceiling panels the lounge offered a glimpse into the busy mall downstairs. The Lounge also serves breakfast, though the offerings were limited the attentive staff did go the extra mile to make us some vegetable sandwiches. 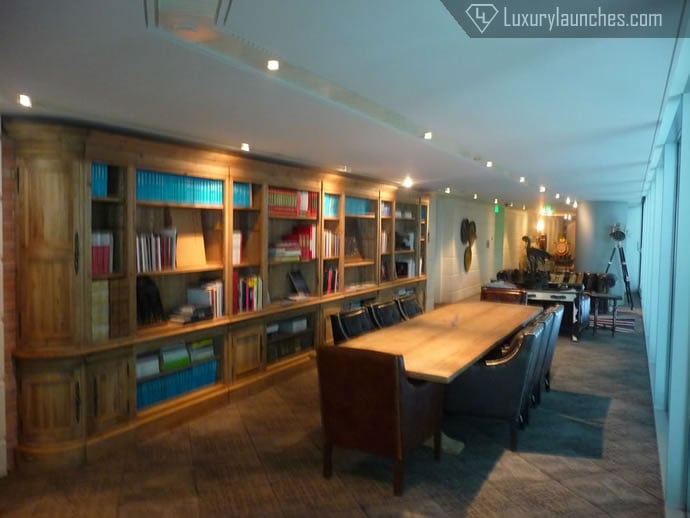 Food and Drink / Facilities –
The Eclat Beijing does not have a swimming pool, spa or even a restaurant of its own. But food should not be a problem as the hotel is connected to the Parkview mall which has a host of dining options. The hotel does have a 24 hour gym and an intriguing library stocked with a variety of coffee table books and magazines.

Despite the lack of facilities you can actually spend hours in the hotel and still be amazed and left in awe.


The hotel is the brainchild of Mr George Wong a Hong Kong based billionaire real estate developer, the Eclat features art and collectibles from his personal collection. On the 17th floor a section is lined up with designer bicycles some even limited edition from the houses of Fendi, Chanel, Pininfarina, Coach, etc. We had taken a tour of the entire hotel, except for the 18th floor as it is where Mr Wong stays when in the city and was off limits.
I can go on and on about each of the floors, from the artifacts to the artwork to the chandeliers each and every one of them is completely different and very intrinsically designed. There was a large collection of action figures on one of the floors while one of them had a cabinet of Matchbox cars and a piano.

The Parkview Green complex is one of the first in its type to hold a Platinum LEED certification, making it one of the greenest hotels in the country.

For the high spenders there are themed suites which cost an upward of $2000 per night. Each of these suites offer around 80 sq.m of lavish living spaces, a private 5 meter endless pool and a 75 sq.m outdoor terrace. You need not worry about the harsh winters or the city’s dreaded pollution as the entire complex is encased in glass and is climate controlled throughout the year. With themes like the Alice Madder, The Matrix, Harry Potter, Barbie, Miami, Eternal bachelor and Classic Sports each of the suite has an unique feel and has been carefully designed to make every stay distinctive.

It is highly recommended to take a tour of the hotel and the themed suites.

One look at the wonderful suites and it will be a sure shot entry at the top ten of your bucket list.

Verdict –
We thoroughly enjoyed our stay at the Hotel Eclat, Beijing, the hotel staff was very welcoming, friendly and most of them spoke fluent English. Staying at the Eclat offers an art hotel experience second to none, the experience is further elevated by the best of technology and amenities in the room.

Note – The Deluxe Room costs 1800 + CNY ($ 300) per night. We were provided complimentary accommodation and services. But the opinions expressed herein are my own.