If Nigella has taught me anything, it is that balance is important. But while she may be known for her Nigella Feasts and Nigellissimas (read: comfort food and hearty Italian), if that same philosophy is applied to any other cuisine, you nearly always know what to expect. Which is why the Chef Indrajit-led Jyran at Sofitel Mumbai BKC, turned out to be not so much a revelation but more importantly an accurate course-by-course display of culinary consistence. It all began with the jaggery-Kashmiri red chilli chutney.

During my stay at Mumbai’s Sofitel, Jyran made up the first of my epicurean experiences. And also intellectual! For when I showed up sans company due to a change in plans, the PR Manager, Pooja Vaswaney and executive chef extraordinaire played fabulous substitutes for part of my time there. And what began as a delightful interaction was bettered by delicious shikanjis (Indian lemonade) with rose water. Might I add that this is an interesting concoction on the one hand! But on the other, as the rose flavor distinctly stands out, for those in favor of the traditional lemonade, this could be called avoidable. 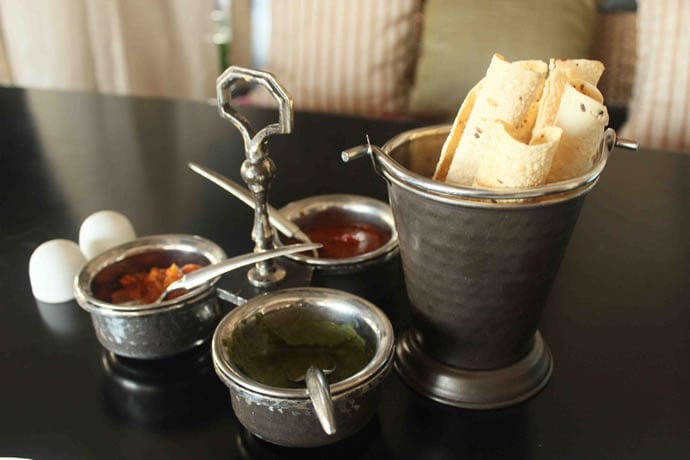 I’m all for innovative tweaks though and as I made that fact known, the chutneys made an appearance, of which the jaggery-Kashmiri red chilli was the tantalizing star smeared on some papad. The thin Indian wafer and perfect crisp accompaniment to gravy-licious North Indian fare crackled in the mouth and left behind a pleasing hot-sweet-ness when washed down with that lemony-rose potion. Now that the papad-chutney duo had played a fiery icebreaker, I saw my chance to inquire. And thus began a probe on everything, from the draught-stricken (in a good, no wait, great way) entrance to the distressed wood furnishing. 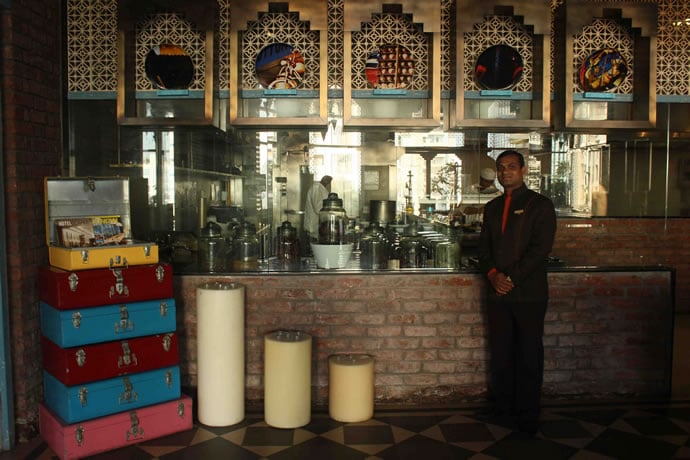 Clearly enough, the answers lay in the famous Indo-French influence, what with sandooks (Indian metal trunks) meeting stylish bar stools on one level and khaat (rustic Indian bed) style chairs, on the other, slightly elevated one creating an ambience of eclectica within. At this point, I must make a mention of the meaning behind the name ‘jyran’, which is ‘lost love’ in Persian and probably the reason for a petite bridge in the beginning, water feature in the outdoor section and the overall romantic atmosphere of the setting. While that’s saying a lot already, everything is topped and ethically so by the oversized recycled metal elephant weighing several tons, near the out door seating. Reminds you of the elephant motif specked Tuskers, doesn’t it? 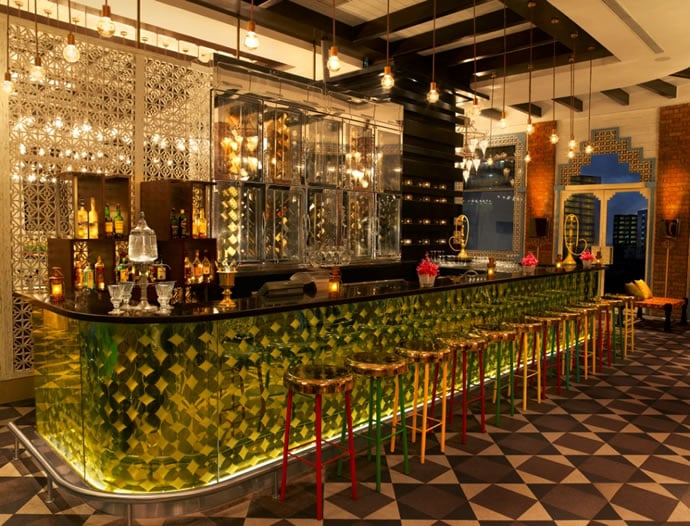 And while there’s a Franco-Indian Tapas menu for the outdoors along with an impressive bar menu of course, I chose to relish food from India’s North West frontier region. Speaking of, when I laid eyes on the list of appetizers, I only thought it apt to start off with an assorted platter. With two each of Anar Badaam ke Aloo (potatoes with almond and fresh pomegranate cooked in a clay oven), Paneer Khas or mint chutney filled cottage cheese chunks, also cooked in a clay oven, Dahi ke Kabab, a hung curd and cashew nut preparation and lastly the Subz Shikhampuri, a shallow fried, minced veggie-spice film with a cameo by cheese, paneer’s reclusive cousin when it comes to Indian cooking. 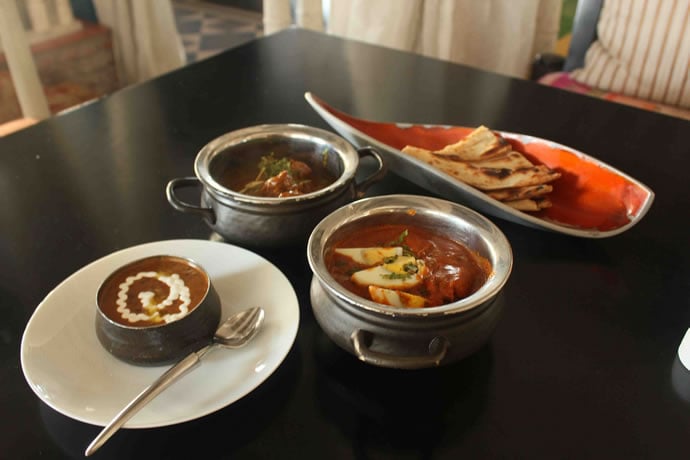 With the exception of Dahi ke Kabab, which left behind a starchy aftertaste, I loved everything, especially the Aloo appetizer, where the potato’s squishy sweetness was made beautiful by the little ruby beads or pomegranate and delicate crunch of almonds. Frankly, by now, I was close to feeling full but there was no way I wasn’t progressing. To the next course, that is, which comprised the very velvety Nahari al Subho (lamb shanks cooked with exotic spices) that has a chef’s secret recipe to thank for and the Murgh Jyran-e-Lazeez, an oven roasted chicken preparation in a tomato and onion sauce with a grated egg garnish to credit. 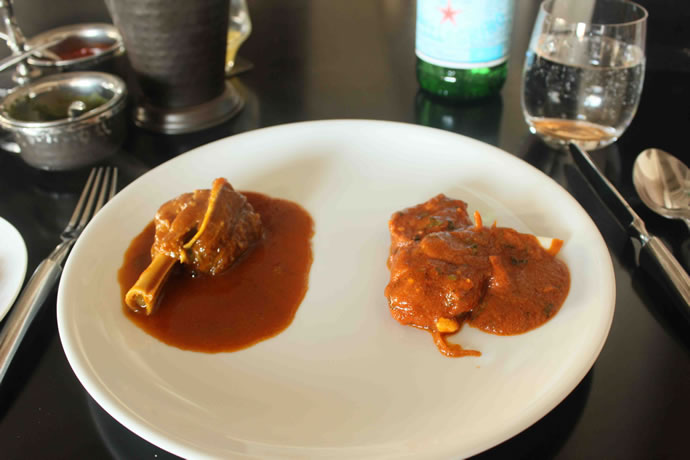 Both are best had with butter naan (Indian bread), the latter laced with some Dal-al-Jyran (black lentils cooked in tomato gravy) as well. Oh that dal! It was the finest, most sumptuous cream-topped creation I have ever tasted, its flavor only improved with some Murgh Awadhi Biryani mixed in. A traditional rice preparation from the region of Lucknow, it was at its aromatic best from the saffron cream in it. Such splendidness could only be topped by an Indian dessert’s decadence. I had two, just to be sure and it was love at Paan kulfi and Tabkh Jamun. 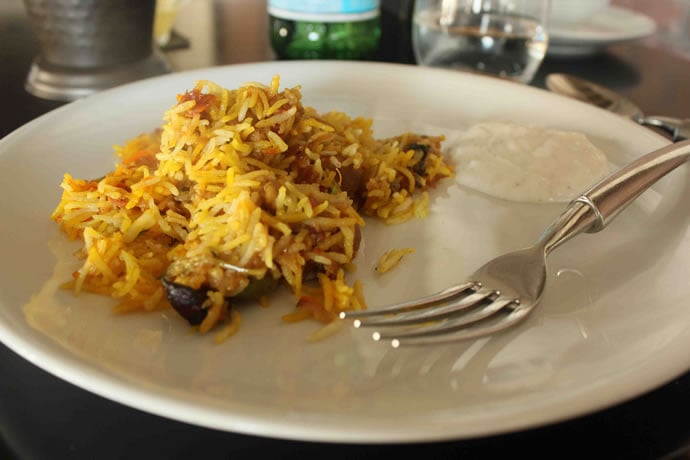 While the former was a cold, condensed milk creation flavored with betel leaf that makes chewing the Indian mouth freshener called paan the enchantment that it is, the latter was the big daddy of gulab jamuns, a giant ball of cottage cheese stuffed with dry fruit favorites. On the server’s suggestion, I combined the duo while tasting, for a wonderful, hot and cold explosion. On yet another suggestion, I returned at night and tried a popular tea infused vodka cocktail besides soaking in the night sky, the fire-d up ambiance (literally) and the nighttime grandeur, that, I am proud to admit, was just as romantic as they’d said. 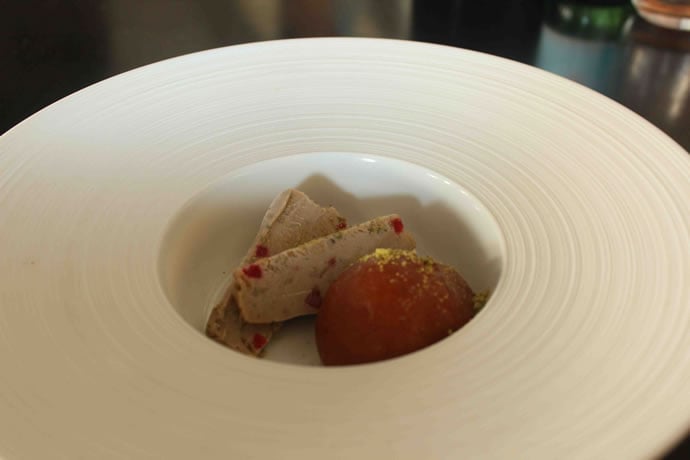