If you’ve grown up in an Indian household, pakodas or Indian fritters are your Monsoon mates. Which would explain why when we bit into the Assorted Appetizer Platter’s well, assorted-s, we weren’t as kicked as you’d think. But fortunately for us, dinner at Tuskers in Sofitel Mumbai BKC was like a graph of say, Facebook’s success, with only a minor hiccup, as you’ll learn. By minor hiccup, I, in no way, refer to the surroundings, which were stylishly specked with rich warm leathers, walnut chesterfields, carpets, grill works and the obvious.

Tuskers with an elephant motif in every corner that meets your gaze is truly unique, with vegetarian dining spanning many cuisines but with Gujarati/ Rajasthani styles, especially inviting your palate courtesy neighbor states, Gujarat and Rajasthan in India’s northwest. So what’s with that name you say? Good you do, I didn’t. Fortunately for me, my inattentiveness to this detail (and in my defense, dedication to the contents of my plate) was overlooked by our server who cheerily chimed it was the property owner’s doing. Despite Tuskers’ inception as a lounge space, the man, with due respect to local culture (after all, this was Sofitel) decided to turn the place into a Vegetarian bar instead. Which leads us to the assorted appetizers again. 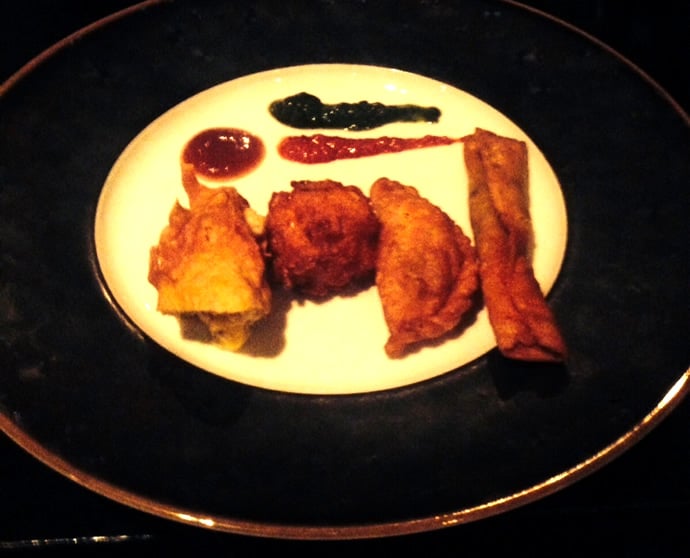 Made up of practically the entire ‘appetizers’ section, the platter comprises two of each with “each” being Makai ke Pakode (dumpling of corn, garam masala), Paneer Gujjiya (Cottage cheese empanadas), Mutter Khasta Rolls ‘khasta’ meaning crisp and ‘mutter’ implying peas within the rolls, and the Jodhpuri Mirch ka Pakoda. Beginning with the last, batter fried jalapeno chilli filled with green chilli and cottage cheese, I have to say it wasn’t all that laden with heat. So have a go at it if mild, fried chilllies are your snacking thing. The paneer empanadas came closer in taste to their name, delicately speckled with the sweetness of raisins. At this point, I must mention the chutneys that came with the table.

Because, of the three, the coriander and sweet tamarind went especially well with the preparation. Speaking of, the remaining Mutter khasta rolls and Makai ke Pakode were just about okay, the former being crisp and thus, true to its name but nothing more and the latter being saved by flavors from the chutney invasion. At this point our server, who by the way was a delight to chat with and an encyclopedia of Gujarati-Rajasthani food trivia happened to mention how most of the preparations in the cuisine come fried for added taste. So on that note, let me play a bit of an encyclopedia myself. Gujarati and Rajasthani food (besides the former’s vegetarianism) is renowned for its balance, what with sweet items like churma (made with jaggery) served during, not after the meal and the savories being slightly sweet as well. 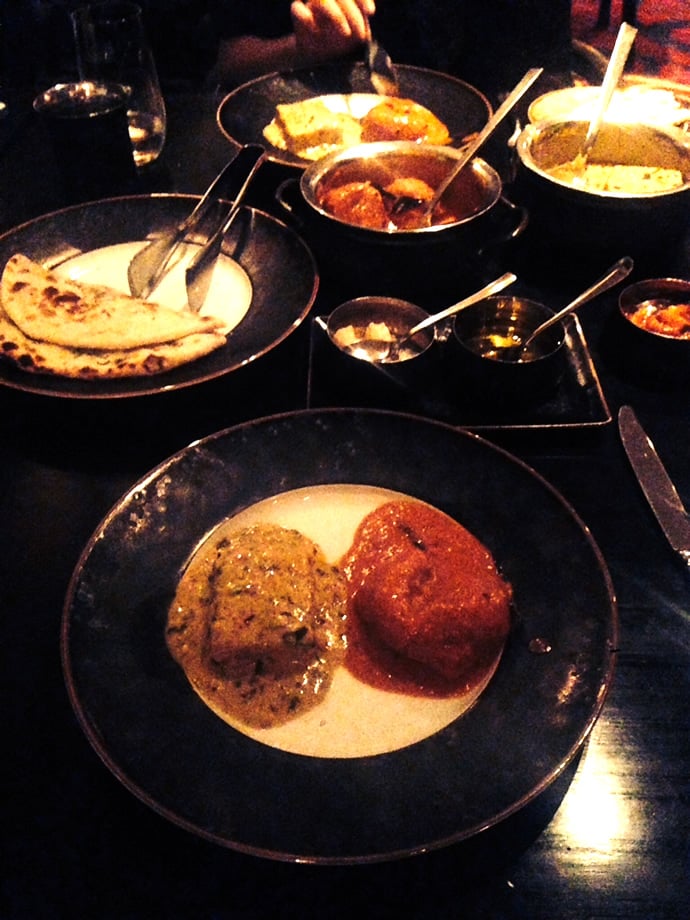 This balance was washed down with some lemongrass-spiked shikanji (Indian lemonade and a fabulous summer cooler), a specialty here and further explored with the Sankre ke Kofte. The ‘kofte’ or dumplings were a deep fried revelation dunked in gravy of tomato and cashew nut paste, their slight sweetness lingering on the tongue along with red chilli’s pickled rage. The chef later explained how this particular dish is one he specifically created for Tuskers’ discerning Gujarati-Rajasthani clientele, using modern methods on a traditional ingredient base. Having grown up in Rajasthan, he was naturally well versed with the value of red chilli pickle in any spread and used his talent to inculcate it in the many sophisticated layers of the dish.

The same sophistication came doused in curd gravy when the Pithod ki Subzi came, with gram flour cubes steamed to tender perfection and excellent with any Indian bread. This reminds me of my own, stuffed with onion and potatoes that was as great a side and a wonderful contrast to the wafer thin (and wafer-esque) thepla or Gujarati flatbread. Trouble arose in our Gujarati-Rajasthani paradise (and not in a pre-code romantic comedy way) with the dal khichdi (or lentil porridge), which while thoughtfully prepared was a crushed rice and yellow lentil mash up that could be called meh at best. Or maybe by this time, we had gotten too used to (read: spoiled) by the piquancy of the sensorial mains. 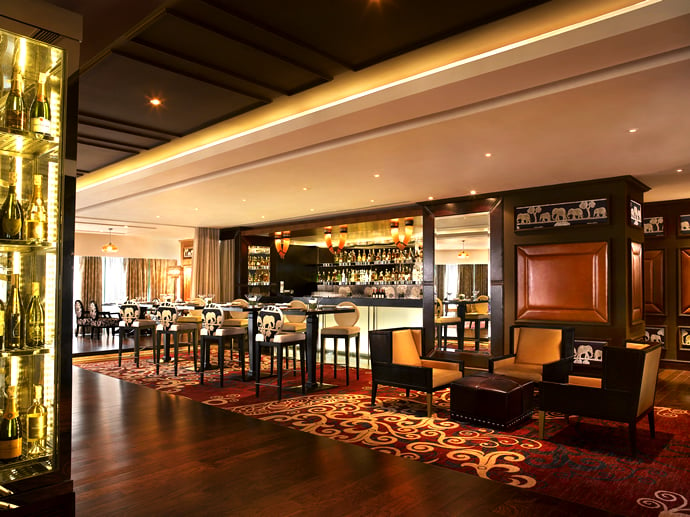 This was a good chance to look up though and take in the atmosphere once again. Its elephant patterned elegance still seemed intact even though patrons seemed to have let down their hair. And no, that wasn’t only because the place has an admirable bar but because it is the kind of restaurant where regulars are made. With the establishment’s dedicated focus on the demands of the city residents, we perhaps already had many regulars in our midst. But that also goes to say one other thing about the place, even the uninitiated willing to sample the flavors from the region know where to begin, without having to be bothered by scanning the city’s nooks and crannies for authenticity or worse, venturing out of state.

I knew I would venture back to my own city eventually though so despite the generous dozes of jaggery and drizzles of hot ghee (a traditional Indian preparation of clarified butter) consumed with every course, I didn’t shy from shifting to dessert for finding gastronomic nirvana once again. I can’t say I got too close though. Hailing from the northern part of the country, I’d had enough of kulfis (India’s frozen answer to gelato) and gulab jamuns (sugar syrup soaked, condensed milk dumplings) in my lifetime to be easily impressed. I even delved into the menu’s ‘From Around The World’ section (betraying India’s North West for once) and dug out the Cinnamon and Apple ice cream and betrayal stung. Or perhaps it was nothing so dramatic but simply saturation from the Sankre ke Kofte-induced sensorial excess. But I can say this, I’m already dreaming about my return to Mumbai for those deep fried buggers again.