Historic address gardened on Les Champs Elysées 3-Michelin-starred Le Pavillon du Doyen is a Parisian institution. This is one of the prettiest Michelin-starred restaurants you’ll ever see, elevated glass-encased with views of the spectacular Petit Palais and the gardens of the Champs Elysées. It is rather a pity that the beautiful old chandeliers are now veiled in a newfangled sheath to appear more contemporary. But the setting is still as charming, the views as beguiling.


“Le Doyen,” as it’s usually called, was the first Michelin-Starred restaurant I’d ever eaten at. I was then still a student. I still have evergreen memories of the very green asparagus I had then. I still recall being overwhelmed by the sequence of courses that composed the epicurean experience. My teacher in Paris treated me. I thought this gourmet food rather better than food for thought. The restaurant was then too a 3-Michelin-Starrer.

Although Yanick Alléno was not then the chef, having recently taken over Le Doyen. But I’ve long known Alléno, from when he was a 2-Michelin-Starred chef at Le Meurice where my inaugural experience incited a tirade. But Chef emerged to explain that unaware I was vegetarian, he was unprepared. He invited me anew and bedazzled me. By my third visit he’d already acquired his third star and was as known around Paris for the pioneering projection of les “terroirs parisiens” as for his debonair looks and Ferrai he was said to roll up to work in.

For the first time since he moved to Le Doyen, I see Alléno this January. Chef greets me and treats me to a special menu. The amuse-bouche comprises an assemblage textured and presented like the very “terroirs” Alléno is synonymous with. Then there’s avocado picked from the tree after 18 months of ageing that comes in a millefeuille of celery and coco extraction tingling with “chia.” Follows roasted butternut with toasted sunflower seeds in a fermented rye bread mousse. There’s pasta to which Alléno brings French elegance and a dish smartened with Alba white truffle, Coquilles Saint Jacques en soupe « vrai » Viroflay à la truffe blanche d’Alba being the house speciality and Coquillettes à la plaque, cancoillotte et truffe blanche d’Alba being the vegetarian option. A course of seasonal veggies is the new vogue in Paris and it comprises my main course. A meatier option is Chef’s famous A l’étouffé d’un bouleau filet de chevreuil in jus d’anchois.

There’s a fine cheese selection, rather parsimoniously portioned. To finish, meringue of poached mango in a peppered mango vinegar, also rather exiguous.

The wines are absolutely fantastic and cleverly paired. Toast the setting with Dom Pérignon Rosé 2003 (you don’t find Dom Pérignon by the glass at every 3-Michelin-starrer so unless you fancy buying the whole bottle, avail of this choice of exclusive aperitif at this restaurant. At the risk of a tedious concatenation, I shall yet enumerate some of the excellent wines courses are paired with and they are necessarily French so you could have an Autriche, Riesling « Smaragd », Domaine Knoll 2013. The French selection includes Pessac-Léognan, Château Smith-Haut-Lafitte 2011, Corton-Charlemagne Grand Cru, Domaine Bonneau du Martray 2008, Saint-Julien, Château Saint-Pierre 2008. This perhaps the only time I’ve had a Hungarian Tokaji in Paris and was delighted with the Hongrie, Tokaji Aszu « 5 P », Château de Sarospatak 2010. Despite the excursion into wine territories around Europe, for a Frenchman the last word and the last wine must be French and champagne, of course, can only be French. Supper culminates with Moët & Chandon « Grand Vintage Collection » 1995 that accompanied dessert. Yes, champagne, to end on a high note! And if I always considered Moët & Chandon the MacDonalds of champagne, I’m not complaining about this « Grand Vintage Collection » 1995, a prestigious champagne so rarely if ever served by the glass.

The service is smooth and sophisticated, if a tad impersonal. Yannick Alléno was a favourite with Japanese when at Le Meurice (I once wrote the Japanese come to Paris for a “Golden triangle” tour of Louvre, Louis Vuitton and Le Meurice) and the Japanese and increasingly the Chinese have followed Alléno to Le Doyen. Now there is even a Japanese stewardess invoked to serve the predominantly Asian clientele… 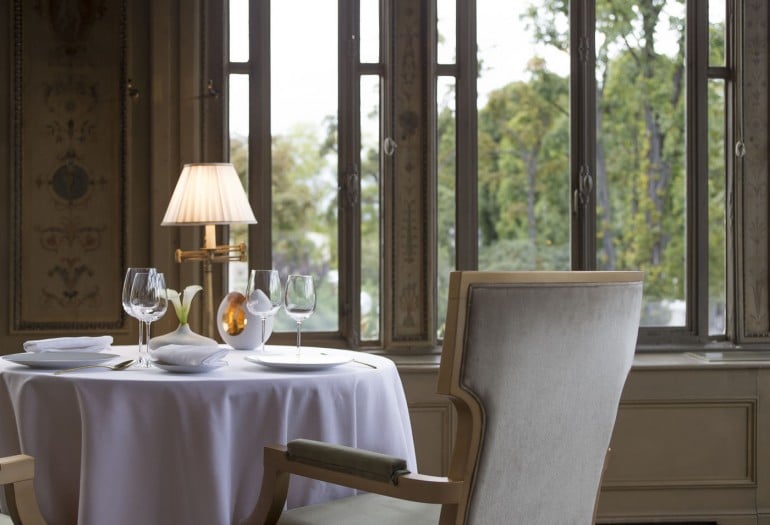 Le Pavillon du Doyen has always been an experience, given its legendary heritage and its unmatched location. Now Yannick Alléno brings to this legend a flash of freshness and flair. If you seek the quintessentially and one might at notoriously starched French service à l’ancienne, fast disappearing from the hastiest of 3-Michelin-starrers, you will find the vestiges of it here.