“Either that wallpaper goes or I do,” quoth Oscar Wilde as he lay moribund in Paris. No, he wasn’t referring to the sumptuous wallpaper that today beautifies L’Hôtel, then Wilde’s last lodgings, now Paris’ smallest 5 Star. But the number of stars L’Hôtel has since received (Johnny Depp, Daniel Craig, Mick Jagger, Quentin Tarantino etc not to mention the Michelin Star at the in-house restaurant Le Restaurant) is rather stellar.


L’Hôtel is best known for being the place where Oscar Wilde lived above his means and died meanly. It is almost as known for being one of celebrated designer Jacques Garcia’s most extravagant works, a masterpiece of Neoclassical grandeur tempered with Napoleon III ostentation. It is perhaps less well known for being a onetime brothel in what was once not the most respectable parts of town. Things have evolved since 1828 (when the edifice was first constructed)- St Germain des Prés is today Paris’s most artistic quarter, arguably its chicest and L’Hôtel stands across the street from the stately École des Beaux Arts, one of the world’s most prestigious schools of art, if not the most prestigious. L’Hôtel’s in an embrace of art galleries, Le Seine’s a minute away. 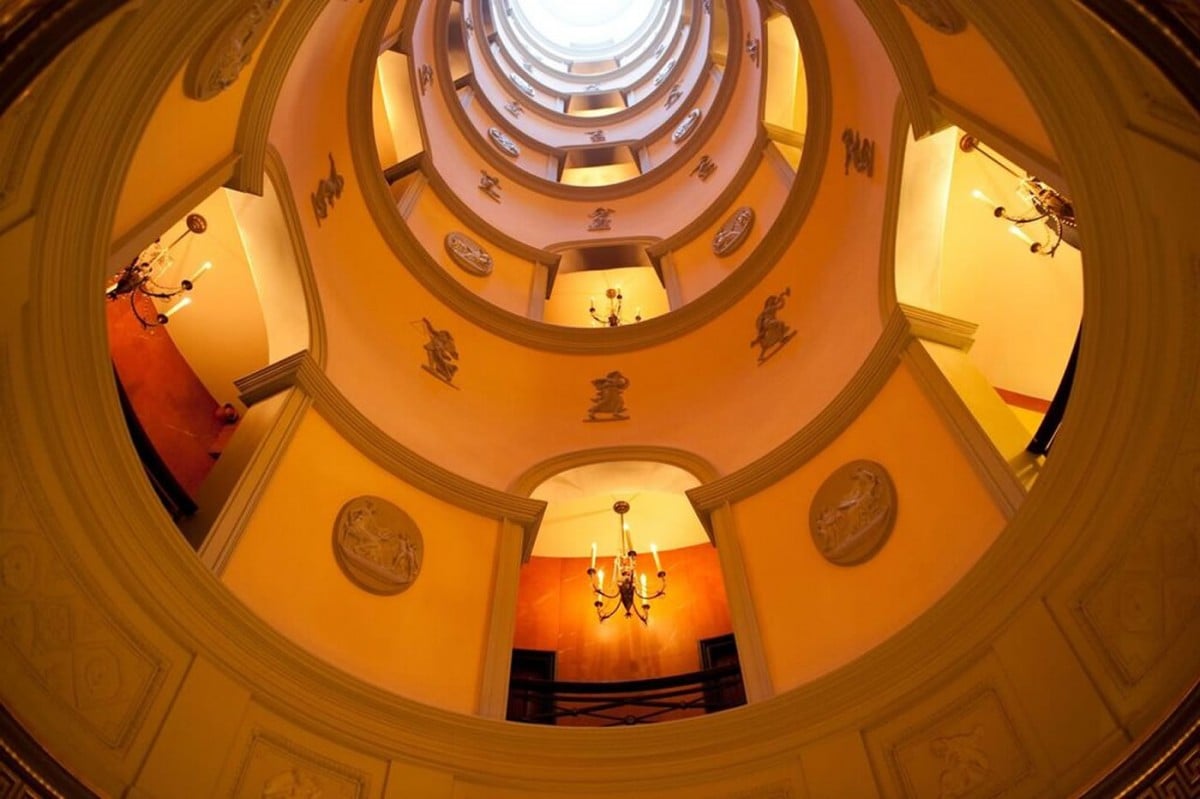 You enter a tenebrous space. Dusky ambiance and shady corridors retain (deliberately?) some of that hushed languidness of a house of leisure. The receptionist quickly points to the sensational circular atrium around which the staircase twines and explains that in days of yore when this building was a bordello girls would showcase themselves in the arched openings encircling each floor of the atrium and clients could from below pick the girl of his choice and ascend to the floor she projected herself from, the bedroom door conveniently behind her. The establishment has come upon slightly less exciting times since the advent of the very discreet and decorous L’Hôtel, alas…

I had apprehensions about this place, not because of its colourful history but because it is today British-owned: I expected a stiff British style (or want of style) of service. Yet, when the receptionist requests my passport to check me in, GM Julien Révah manifests and says suavely, “There’s no need for her passport, she is my guest.” Julien, trim, tall, spruce as only French men are, is the quintessence of Parisian charm and chic. He quickly dispels any misgivings I had that L’Hôtel would be banefully and painfully British. Emphatically he establishes that we are in Paris and L’Hôtel is a Parisian hotel, committed to a vigorously Parisian experience.

My suite, the Marco Polo, seems possible only in Paris for it incarnates the French penchant for dépaysement or that delightful disorientation in the sense of being transported to far-flung exotic destinations. The Marco Polo is a voyage into the world of Marco Polo and rather a bargain at €740/night (with breakfast!). The bed is a beauty and has as its headboard a piece of ornate artwork with elegant carvings in wood, apparently fetched from an old Chinese palace. Ornamental paraphernalia from the same set adorns the wall opposite the bed. Immense imperial armchairs are stately like thrones in teak and flanking them is a pair of tremendous Chinese vases towering almost 2m. They preside with poise in a windowed enclave opening onto a rind of terrace. Come evening, this area is robed in a lush crimson cloak (AKA opulent curtains!). A magnificent 19th century bronze chandelier hangs serenely over a grand almirah, handsome desk and exquisite bedside tables, all 19th century oriental pieces in deep red lacquer. The showstopper, however, is the captivating wall “paper” in hand-woven silk. The particular attention lavished on silken wallpaper in rooms seems a playful riposte to Oscar Wilde’s witticism about the wallpaper. 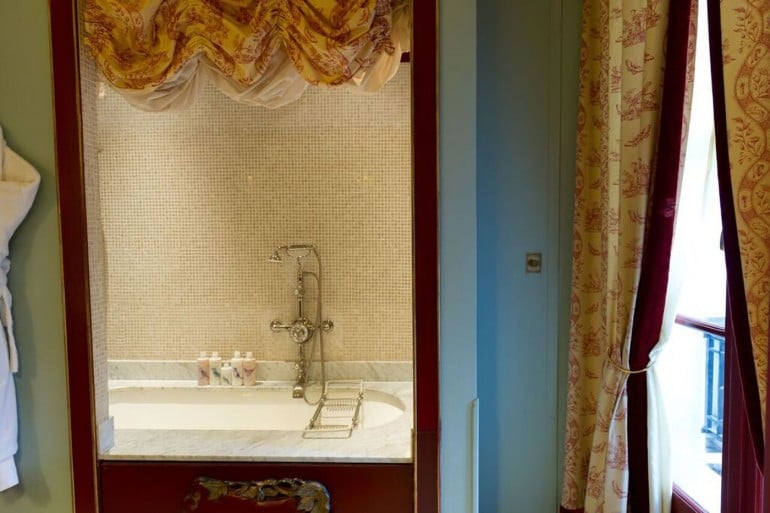 The bathrooms are splendid with marbled tubs and large dispensers of handmade British Green & Spring toiletries the hotel owners produce. Guests are wont to siphon them away so there’s a polite note that if the toiletries are so desirable, they may be purchased at the reception… However, at turndown my suite is generously gifted a travel kit with miniature versions. Nice.

Julien, who narrates the history of this place with such passion, takes me on a guided tour of other rooms, which is like a stroll through a museum so rich are the associations, original artwork and artefacts of each room. Even bathrooms boast period furniture fascinatingly converted into wash basins and such like. The suite Oscar Wilde died seems perennially occupied. But I’m shown The Apartment that has just been vacated. Julien rues this is their Presidential Suite that he had reserved for me, but given my innumerable date changes when I finally rocked up the Marco Polo was the best he had. I think the Marco Polo is more regal and exotic, even if The Apartment has a private terrace and is themed on “cardinal” so it’s gloriously in carinal colours and there’s a tableau of a famous cardinal behind the bed. There’s an art deco suite replete with legendary French singer Mistinguette’s bed and dressing tables. But I rather fancy some of the smaller rooms. The one themed on harlotry is especially thrilling.

Breakfast is included with rooms and happens at Le Restaurant with its olive green romanesque pillars in marble, lightly sculpted wooden frieze and plushly upholstered seating. Medieval-looking brass lamps hang from iron chains. This is amongst the prettiest breakfast rooms in Paris overlooking a lovely little inner garden with a fountain set against a lush wall of verdure (yes, the wall is entirely tapestried in plants). The garden opens up in summer into an alfresco terrace. And in brutal winters, you just want to languish all morning in the snug and somewhat smug indoors over copious cups of coffee. It’s Richart and no Parisian 5-Star does coffee quite like L’Hôtel does. Have coffee at the bar and it is served with chocolate from one of Paris’s most exclusive chocolatiers Jean-Paul Hévin. But Le Restaurant is a more seductive space by far, even if Monica Belluci or Keira Knightly are drinking at Le Bar.

Le Restaurant, which turns into a Michelin-starred restaurant post breakfast, looks more ravishing by night. So Julien suggests I take time from my gourmet gallivants around Paris to experience the in-house dining option not for lunch but for supper when tables are dressed and twinkle with candles. All that twinkles here is not Le Restaurant’s Michelin Star… I recall when the restaurant first was starred I was lunching with one of the Michelin boys who said they conceded the restaurant a star “pour faire plaisir au director” (to make the GM, a friend, happy). The GM has since changed as has the chef. Current chef young Julien Montbabut’s cuisine is perhaps not the most exalted in the epicurean pantheon. However, the chef happens to be married to the pastry chef which is very romantic and perhaps inadvertently lures romantic couples who comprise the entire clientele (save a few local personalities who arrive armed with photographers clicking away at every morsel the “personality” consumes). Le Restaurant, enthrallingly sensuous, is arguably the most romantic of Paris’s Michelin-starrers. It cannot but be, located as L’Hôtel is on what was in the 17th century Queen Margaux’s Pavillon d’Amour (Pavilion of Love) in her palace gardens.

Palace life continues within the precincts of L’Hôtel what with Prince Charmant for a GM. This is amongst Paris’s most famous hotels and yet it retains its mystery and mystique, remains a secret hideaway in the classiest part of Paris. Service, if not remarkable, is irreproachable. There are no “characters” the last one to occupy this hotel died on 30 Nov 1900 (although Salvator Dali has stayed since). But L’Hôtel is ever endowed with tons of character and it’s all in the decor.