The Four Seasons Gresham Palace is one of the most talked about hotels in the world. This legend, which has been the home to such personalities as spies who ran cabarets and actresses who had apartments without kitchens and got their neighbours to cook for them, is a Four Seasons hotel like no other. Budapest languished in the doldrums of touristy oblivion post World War II. Even after the fall of the Iron Curtain, unlike Prague, Budapest didn’t suddenly become the rage of Eastern Europe, despite the fact that it boasts of some of the most splendid examples of Austro-Hungarian architecture. Then, Four Seasons came along, took over the historic Gresham Palace and transformed it into one of the most celebrated hotels on earth. So the rich and famous came along to check it out. And the not-so-rich-and-famous followed suit. Thanks to this iconic hotel, the somewhat xenophobic locals saw troops of tourists descending upon them en masse. Around the hotel sprung super swish restaurants, trendy bars, sensational spas and glam international designer boutiques. Today, Budapest is a buzzing cosmopolitan city luring everyone from bakers and bankers to artists. Ask anyone in Budapest and they will tell you that Four Seasons brought in a well-healed clientele and created the luxury market. Cities make hotels. But sometimes, hotels make cities. 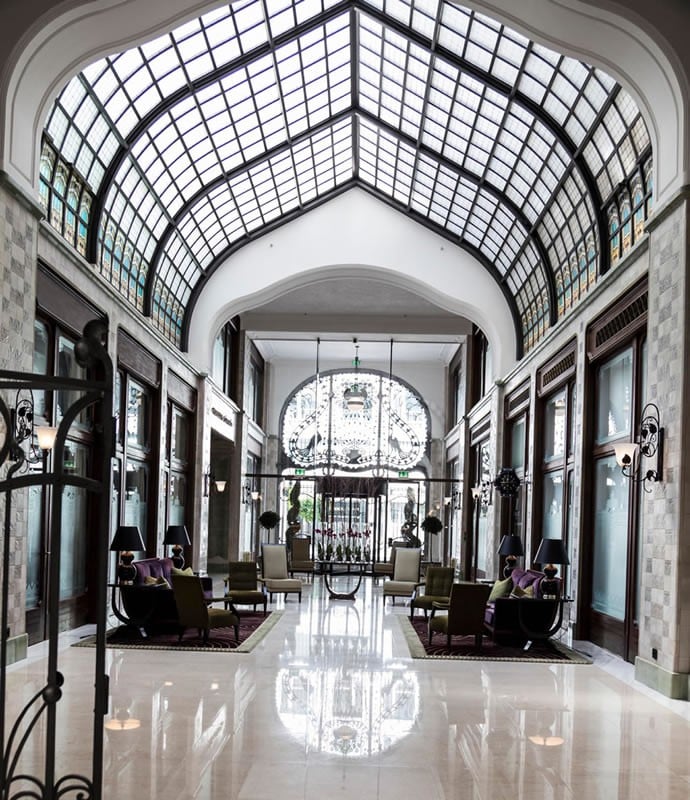 Decor: A masterpiece of Art Nouveau architecture, the restored historic monument with an ornate exterior bewitches. From the twin peacocks that greet you at the entrance to those whose dance entrances you around the interiors, the hotel abounds with wonders that delight the eye including wrought iron artistry pervaded with the peacock motif (notably the grilled gates) and the lobby’s marvellous mosaics. Indeed, the hotel is so exquisite that one knows not whether to look in at it or gaze out at the most fabulous views in all Budapest. Moreover, Gresham Palace also supports the flourishing contemporary art scene by promoting young artists and showcasing their work in the premises. Indeed, the hotel is actively involved in encouraging visitors to take a fresh look at Hungary’s cultural heritage, including art from Medieval to contemporary times. 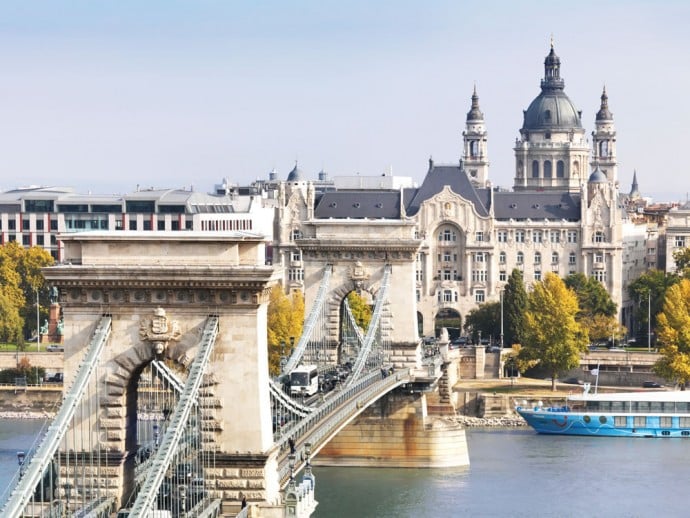 Location: This landmark stands ideally before the famed Chain Bridge that links Buda and Pest. The city’s most significant historic monuments are across the river whilst beautiful churches are sprinkled in its vicinity. The museums, which are quite simply superb, too gravitate around the hotel, or are a pleasant walk away if you fact strolling along the river (recommended!). The State Opera House too is a walk away and the hotel can assist with tickets to high-profile concerts. 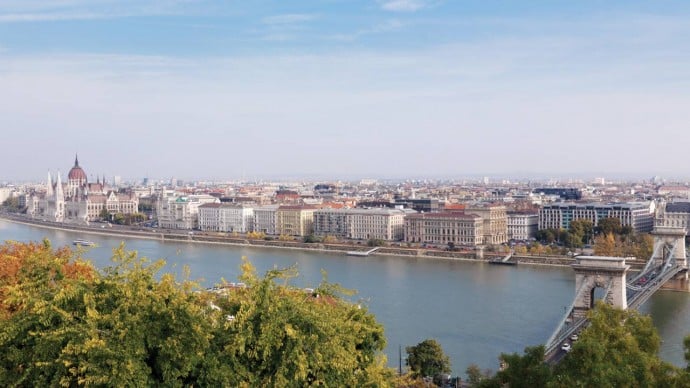 View: Legend has it that the lions which guard the bridge at either end have no tongues, an omission that caused the sculptor to drown himself in the river out of shame. But worry not your head about the tragedy as you perch by your window and take in the view of the sprawling façade of the former palace complex and the abundance of historic monuments around. But for that, you need to check into a room with a view! 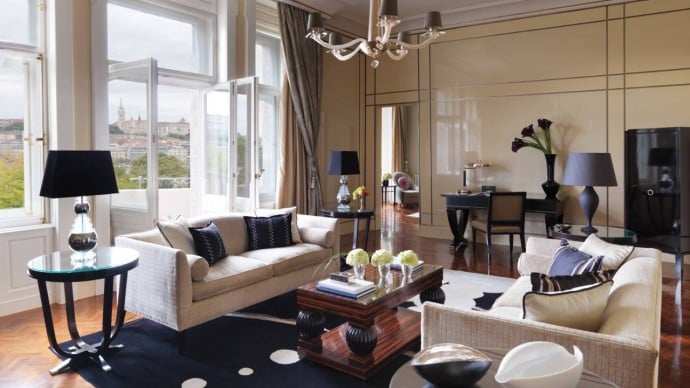 Accommodation: The palace boasts 19 stunning themed suites. Whilst some of them like the Budapest Royal Suite and Buda Castle Presidential Suite are extraordinarily grand, none charms more than the suite I stayed in, the River-View Park Suite with its plum and pearl grey interiors that are lavishly upholstered yet serenely sophisticated. Lovely flower arrangements relieve the elegantly restrained colour scheme. Enhancing the expansive feel of the room are immense, airy floor-to-ceiling windows with views that capture the Danube, the Chain Bridge, the Royal Caste, the Fisherman’s Bastion and the gently undulating Buda hills beyond. And yet, the captivating surrounds notwithstanding, you might well prefer immersing yourself for an eternity in the gorgeous white marble bathrooms. 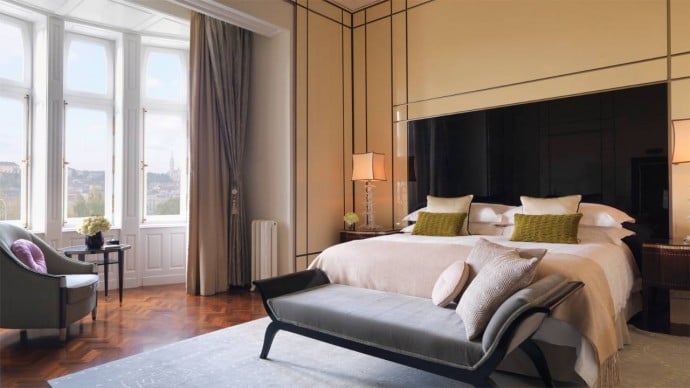 The staff that’s no less gorgeous will even bring you breakfast in the bathroom. But you want to be tucked into the plumpest beds swaddled in lavish linen when the petits fours are placed on your bedside at turn-down.

Dining and more: Modeled on a café long frequented by Budapest’s intelligentsia from the nearby Hungarian Academy of Sciences, what was once the Gresham Restaurant and in now a meeting space is adjacent to the magnificent Hotel lobby. It was until very recently a classy cafe featuring slick light fittings, contemporary art works and floor-to-ceiling windows that frame stunning view across Roosevelt Square to the Danube and hilltop Buda Castle yonder. The decor still remains if you’d like to enjoy it but then you might have to organise a private party there. 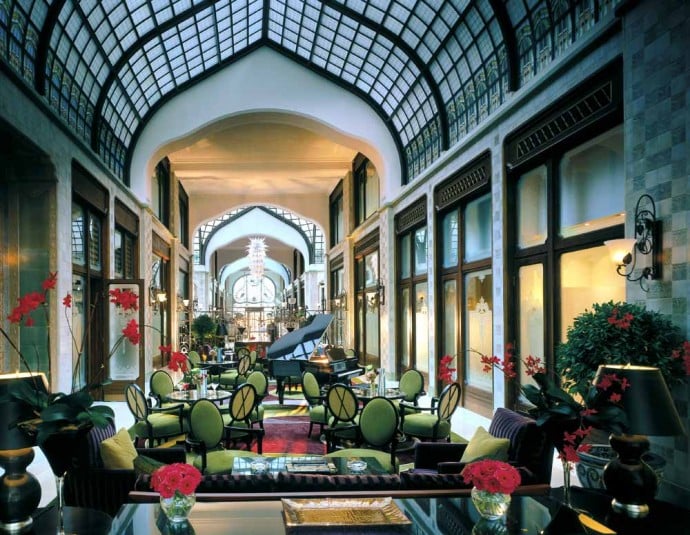 The other restaurant Páva, Gresham Palace’s fabled “Peacock” restaurant, was quite simply astonishing. Once, this extravagance of slick glass and arresting contemporary artwork flashing peacock colours floored you whilst floor-to-ceiling glass windows commanded views of the Chain Bridge and the Buda Castle. But here you forgot the view and watched instead Budapest’s beautiful people who came to flaunt their furs and fashion. When I stayed, the restaurant had a seemingly boundless and terrific-sounding fine dining Italian menu. To complement the striking surrounds, the food was strikingly presented. But the visual fiesta perhaps surpassed the restaurant’s epicurean feats. Sadly, despite a fantastic selection of the finest of Hungarian wines, the cuisine didn’t quite cut the mustard and the restaurant is now obsolete. Indeed, on 30 May 2015 the restaurant re-incarnated in a new and more casual avatar and is now called the Kollāzs Brasserie & Bar. The decor might be attenuated but the view persists and can be better relished from the jazzy just-launched terrace. The international and Hungarian specialities are not grand gastronomy but make for brasserie-style cuisine, although more substantial options are available. In keeping with the city’s coffeehouse tradition, there is a wonderful selection of cakes and pastries and varietal coffees and teas which ever lure Budapest’s elite. This is still the place to people-watch.

The hotel’s only other F&B option (besides in-room dining) is the Bar and Lobby Lounge that floats into the historic Páva Udvar or the Peacock Passage with its majestic glass cupola and grand piano that serenades guests come evening over superb Hungarian wines. Although international options and speciality martinis too are available, Hungarian wines are a revelation and here’s the place to discover them. And for tea-totallers there’s the Herend Afternoon Tea. However, we recommend it with a glass of bubbly to toast the buzz about Budapest.

Gresham Palace, for all its, grandeur, is perhaps gastronomically less than spectacular. But ask the hotel’s savvy and obliging concierge to recommend the city’s best dining options and they will book you a table at Baraka, the address making the “World’s best tables” lists and which propelled Budapest’s gastronomic scene to international fame. Here’s where you’d be supping beside heads of state, royals and celebs be it on the lush, leafy terrace or in plush plum and silver Eszter Gaal interiors. Chef Norbert Biró’s creativity translates in East-West-boundary-transcending exotica. Seafood is a specialty and black tiger shrimp poached in kaffir lime with glass noodles a signature dish. But feeling adventurous? Try five spice duck breast with mango-papaya, Indonesian black rice and Tokay raisin sauce or unctuous balsamic chibouste with coconut cream cheese mousse and caramelised pear purée on coconut-almond macaroon. Whilst owner David Seboek makes homemade breads and Michelin-star-material deserts, his irrepressibly garrulous and delightfully charming wife Leoro makes conversation. Savour anecdotes of Budapest expat escapades over dry Tokay- no, it’s not a contradiction in terms… Indeed, the supplier is a young aristocratic heiress who traipses around New York with a backpack containing Tokay from ancestral vineyards trying to promote Hungarian wines.

The hotel concierge will also send you for a taste of history to the traditional Café Kor. Budapest is exploding with swish new restaurants and bars, but do take the concierge’s advise and visit this vintage venue classed amongst the world’s best restaurants by San Pellegrino. The likes of Roman Polanski come here for authentic, homemade Hungarian cuisine whose renown is such that almost every inch of the café’s walls are adorned with framed awards!

Verdict: Most hotels can claim to be “arguably” the best hotel in at most a city but Four Seasons Gresham Palace alone has the distinction of being repeatedly hailed at the “Best Hotel in Hungary.” The location is perfect, accommodation and service leaves nothing to be desired. However, the cuisine belies standards one has come to expect of a Four Seasons.