“Our hotels worldwide now have an option of incorporating a spa that is culturally relevant and unique into their guests’ visit,” said Sharilyn Abbajay, vice president of the spa for Marriott International. And Saray Spa seems to have got the message loud and clear. Tucked away behind ornately carved doors in Dubai’s JW Mariott Marquis, the spa draws its inspiration from the historic Caravanserais located along the old silk trade routes. Borrowing from rituals that have withstood the test of time, it inculcates locally sourced natural ingredients. It applies ancient healing techniques—case in point, my own Saray Signature Dead sea journey experience. 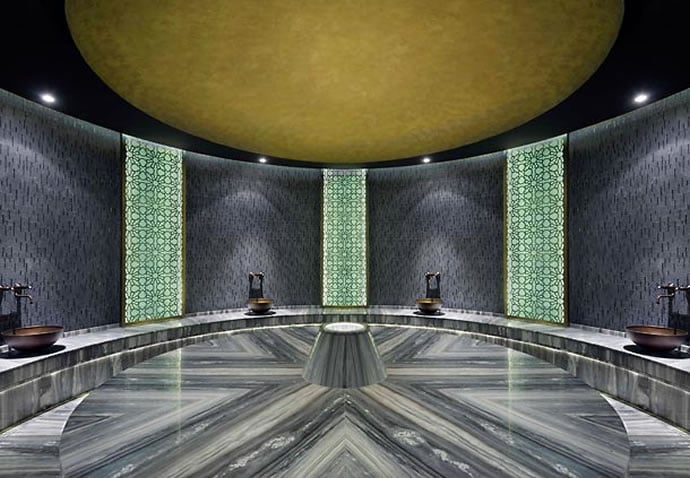 You’d have guessed from the name, albeit with disbelief, that this is what’s coming next. The treatment involved rich nutrients of pure Dead Sea earth and healing mineral salts of the sea, and yes, they were imported directly from Jordan’s Dead Sea. But before we get to that, there is no escaping the spa’s omnipresent middle-eastern revelry.

The spa combines Arabic design elements along with its traditional treatments and products to provide guests with an authentic and holistic experience. There are a total of 15 treatment rooms, which include 2 private Hammam rooms, 2 Thai treatment rooms, one Dead Sea treatment room, and 2 Private Luxury Spa Suites, Spas within a Spa, if you ask me, replete with all that you would require for the ultimate relaxation therapy. 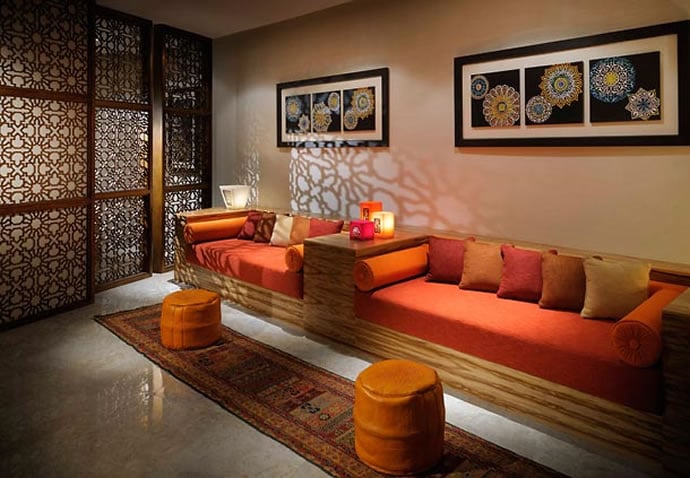 And speaking of therapy, it began at the doorstep for me. As I crossed the traditional ‘majlis’ reception area, I realized how it evoked the romance of another era. With the smell of orange and frankincense wafting in the air, the warmth of the herbal tea, and brass lanterns adrift in the atmosphere, I felt welcomed into an alternate realm, like I was a part of a middle eastern fantasy. The reminiscence of the Silk Road was further brought to life when I entered the treatment room, designed to emulate Jordan’s dead sea. 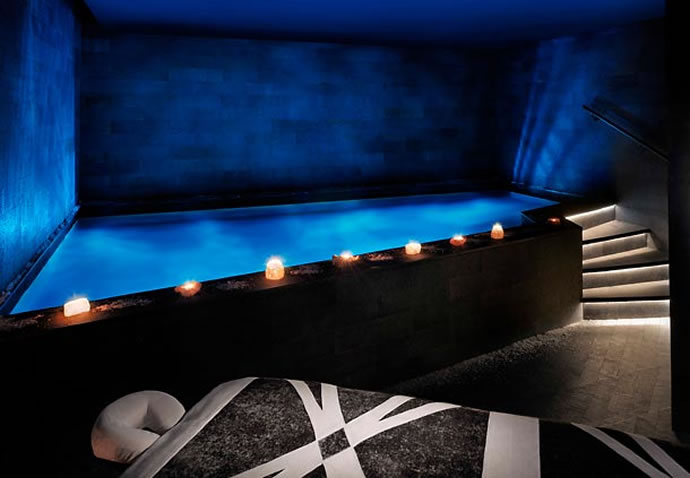 My therapist, Mani, mentioned it was the only treatment room in Dubai with its own private Dead Sea pool. Though, with the pool as well as an attached shower stall, “room” would hardly suffice. It was more an aromatic candles-infused medley of Middle Eastern and Western philosophies. And wrapped in all its abundance, began my much-awaited treatment.

Mani started by taking the dead skin cells off using a full body scrub with salts rich in minerals from the Dead Sea. This lasted a full fifteen minutes resulting in skin that was smooth and exfoliated sumptuously. I relaxed for another fifteen minutes basking in the glow of candles and being relaxed by the soothing sounds of the music, after which I proceeded towards the shower where I was to brush the salt off without any soap.

Then came the wrap. Using mineral-enriched mud and oils from the Dead Sea, a paste was made and applied over my whole body. Just the thing to do after all the dead skin cells were removed and the skin was just ready to absorb some nutrients. Once that was through, I was wrapped tightly in plastic from neck to toe. Now I’d be lying if I said I didn’t feel like a life-size Ken back then or that the heat didn’t make me squirm if just a little, but that entire half an hour was only going to open up all my pores and in turn, open me up to the possibility of finding my skin replenished utterly. 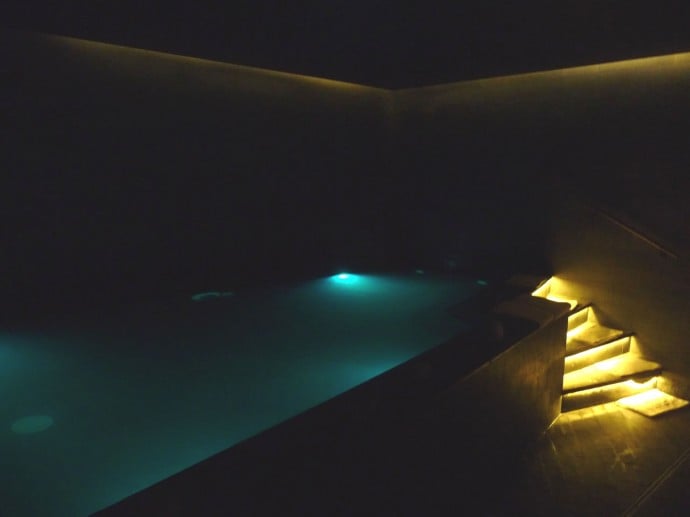 Then followed a second shower so I could wash off the mud and prepare to float away in the ‘Dead Sea’ pool. Still, nothing could’ve prepared me for what came next (besides floating in the actual Dead Sea, of course, but who wants that when you can have this!) The pool was not only large but ethereal. It was the place where angels went to float, or so I thought as I dipped my feet in. And boy, was I glad because it easily fit my entire frame and even allowed me ample space to float. The pool’s salt saturation and temperature are set up to simulate its namesake in Jordan, but what I didn’t know was that it would offer me an absolute calm from within.

Forty minutes passed, and I didn’t realize when. Leaving that pool was like waking from a reverie and ending a camaraderie that I felt had been forever cherished between me and the calming waters of the Flotarium. I urged myself to the shower stall, realizing how different that would be already. Then it was time for a body massage, the mere thought of which elevated my spirits greatly.

It began with skin-softening Rose oil. Mani also had in hand a special facemask made using the mud, which is especially obtained from a deeper part of the Dead Sea. This mud is said to absorb the heat and help reduce under-eye dark circles and puffiness. After thirty minutes of the process, I proceeded to take, what would be the final shower, no soap again. Mani told me soap or any other lotion was to be avoided for the entire day so that the body could absorb the rose oil and other nutrients. 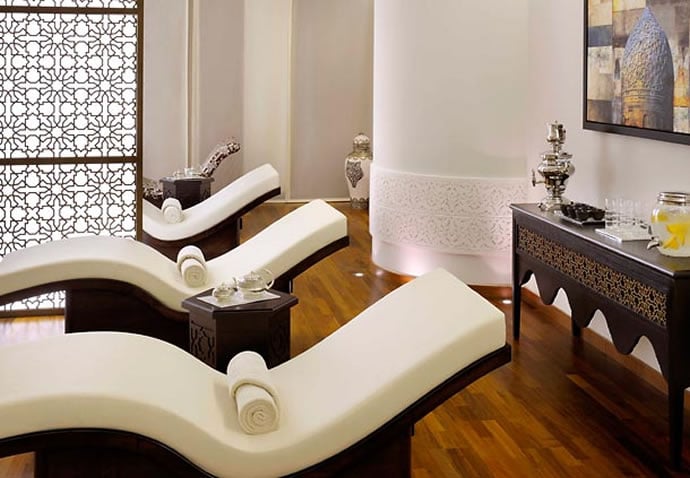 I was then led to the relaxation lounge. As I submitted my now soothed self to its ivory-and-wood plushness, I recounted the parts of my experience even as I enjoyed its therapeutic aftereffects immensely. My skin was smoother, more nourished, and visibly enriched if that’s possible. But other than that, what I noticed was that the treatment had been soulful as well, in the sense that it had invoked a deep inner calm and offered me the richest relaxation.

This unique treatment, I was told, could also be done in any of the spacious private treatment rooms minus the Dead Sea soak in the Floatarium. But I was thankful for my decision, and from my own experience as well as the pool’s design to bring about a true feeling of warmth and weightlessness, I’d say you go the whole luxurious hog and indulge in the complete and immeasurably restorative Dead Sea Journey. Or there is always the uber-indulgent Saray Golden Hammam, which combines a traditional Hammam service with the luxury of precious Gold oil infused with 24-karat gold leaf (next time’s note to me). 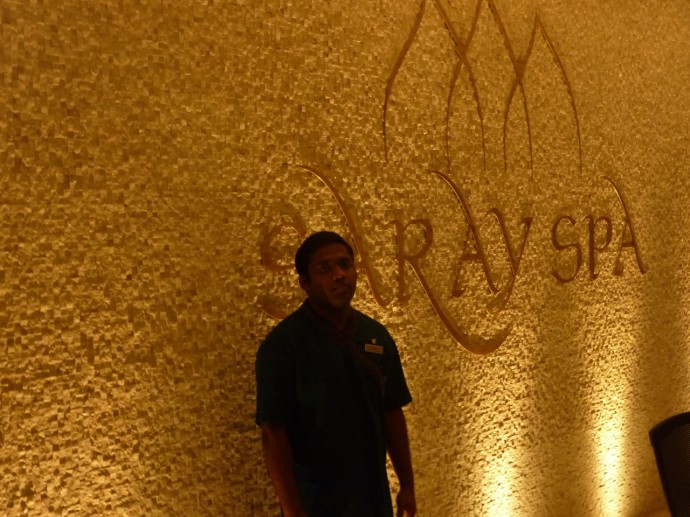 Mani strikes a pose at the spa lobby.