Kyoto is unarguably one of the prettiest places in the world. The former capital of Japan has plenty to offer for the discerning traveller, and it is best enjoyed by choosing a place to stay that showcases the country’s rich cultural heritage and traditions. Suiran Kyoto fits this bill to the T. 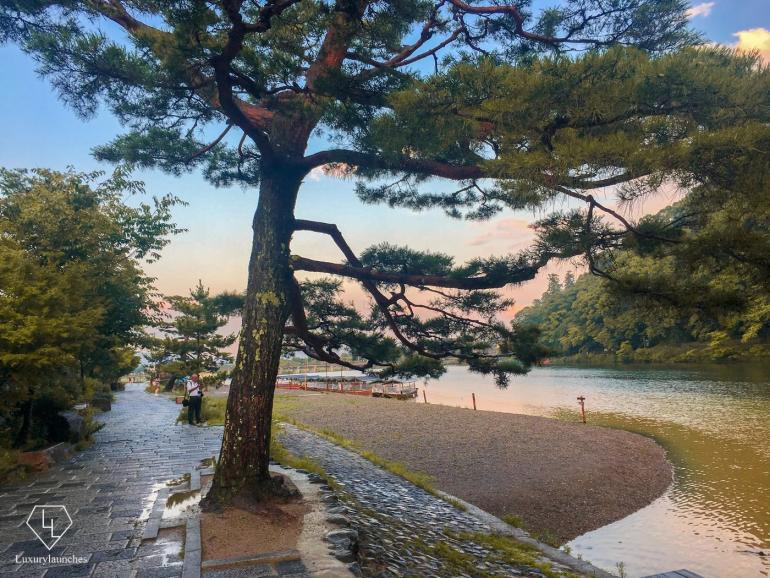 Part of the Luxury Collection by Starwood Resorts & Hotels, this oriental paradise is tucked in a corner of Arashiyama, located towards the west of central Kyoto and on the north banks of the Hozugawa river. 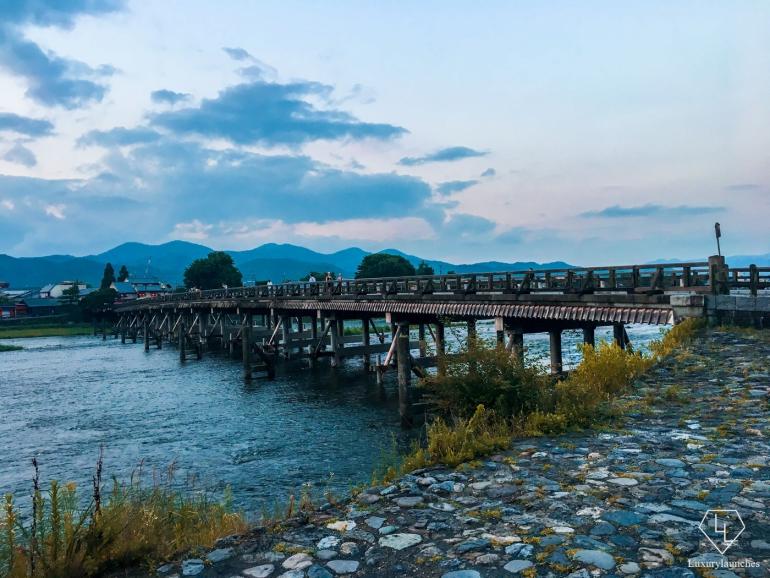 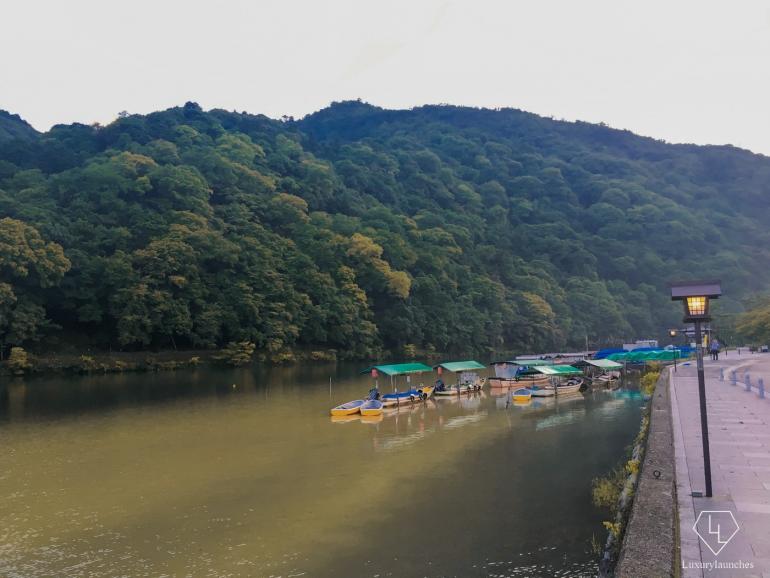 Considered to be one of the most beautiful sights of this city, Arashiyama was once a summer holiday destination and fishing retreat for noble families. Located on the banks of Oi River and at the foothills of the Arashiyama Mountains – also known as the “storm mountains” the site is today famous for temples and shrines. The Togetsu-kyo bridge takes the spotlight at first before the rest of the gems fall into place such as the famed Sagano Bamboo Forest and UNESCO World Heritage site Tenryu-ji Temple – both spots that have earned a secured position in the best sites of Kyoto. 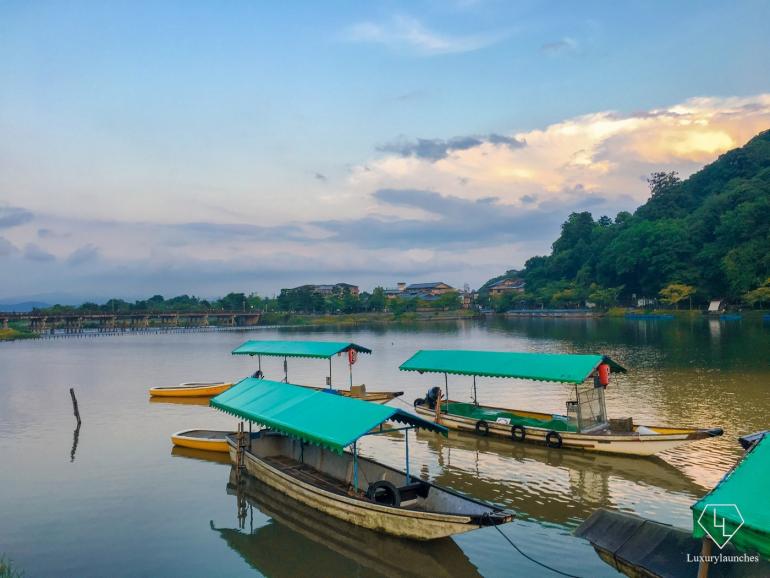 Further up the river you will reach Kameyama-Koen Park and several other spots that leave you in awe. One way to explore some of these sites is to rent a boat and enjoy a lazy cruise along the Hozugawa river. In spring or autumn, there is the Sagano Romantic Train that offers a scenic tour. As well as the tourist spots, you can revel in the charm of Japan’s beautiful cherry blossoms early in the year while flaming red maple trees hug the landscape in winter. Also, if you are visiting in May, Arashiyama is full bloom during the shinryoko, or the new green season. 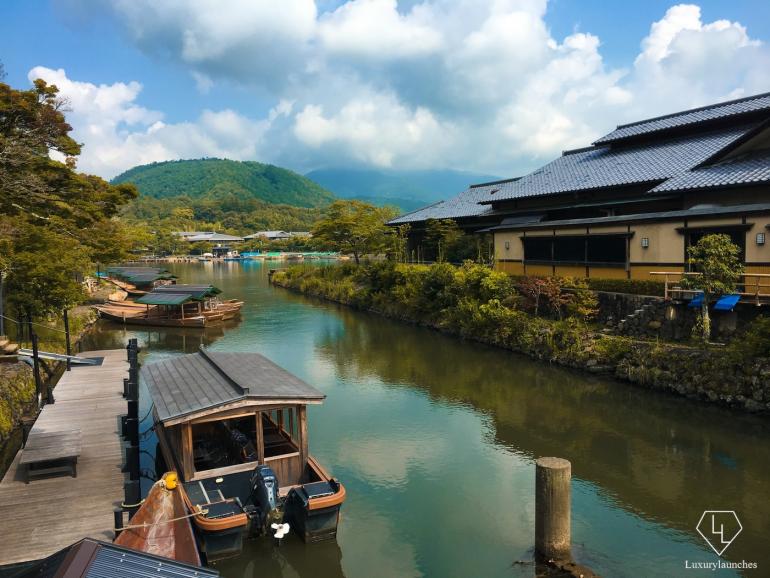 Suiran Kyoto is located just a stone’s throw away from these attractions. Even the nearby tourist-packed bamboo grove doesn’t disrupt the peace and calm that prevails in the hotel premises. If you pay close attention, you may hear are muffled voices of hotel guests, footsteps over the property’s pebbled walkways and a water fountain. The grove is best visited in the early hours or late evening. 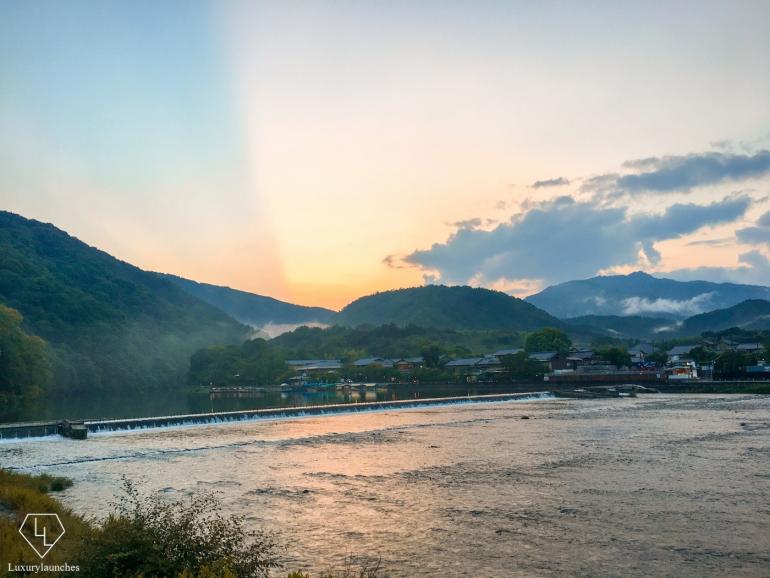 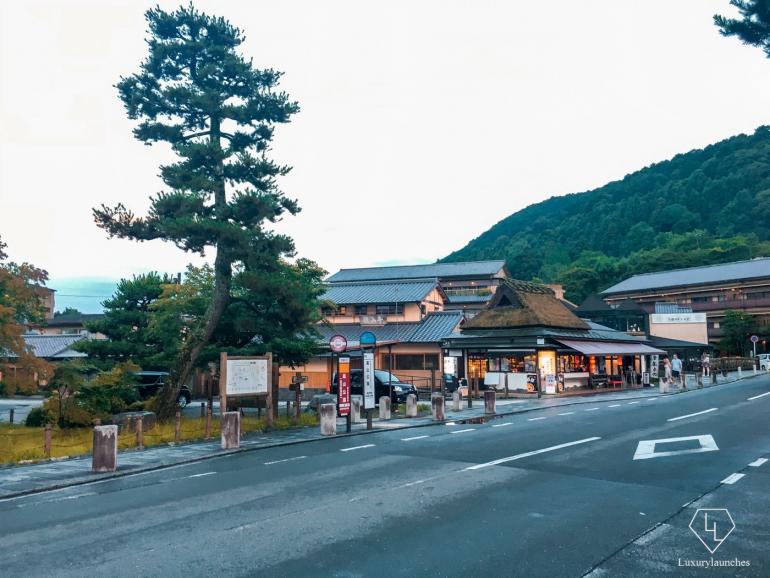 You can reach the hotel by taxi from Kansai International Airport in around two hours, I had taken the Bullet train from Tokyo and it took me 45 minutes by taxi from JR Kyoto station. 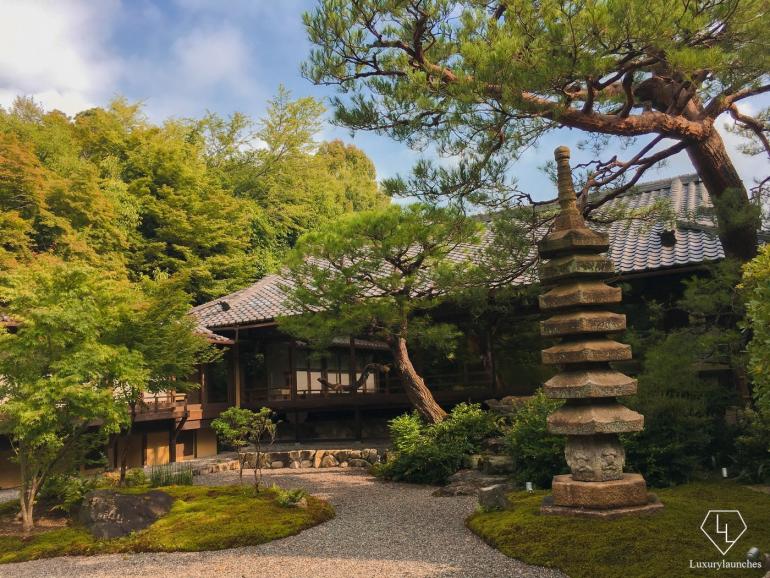 As soon you enter the grounds through its main arch, you are looking into old Kyoto with elements of modern times blended in effortlessly. The ambiance resembles a ryokan, a traditional Japanese inn that used to exist since the 8th century. Cobbled pathways, swaying trees, manicured lawns, fountain features and wooden architecture transports you to a different age, an era bygone.

The hotel, which opened in 2015, stands where once stood the summer palace of emperor Godagio who ruled the area in the early 14th century and later became part of a temple. The property was sold off in the late 19thcentury before the founder of Kawasaki, Shozo Kawasaki, built a summer home here. This structure still stands today and houses the Kyo-Suiran restaurant.

While waiting for checking in, you should definitely chat up with the front desk staff to narrate the story of the hotel’s old reception desk. This unique piece of art is made from a 500 year old piece of pinewood. 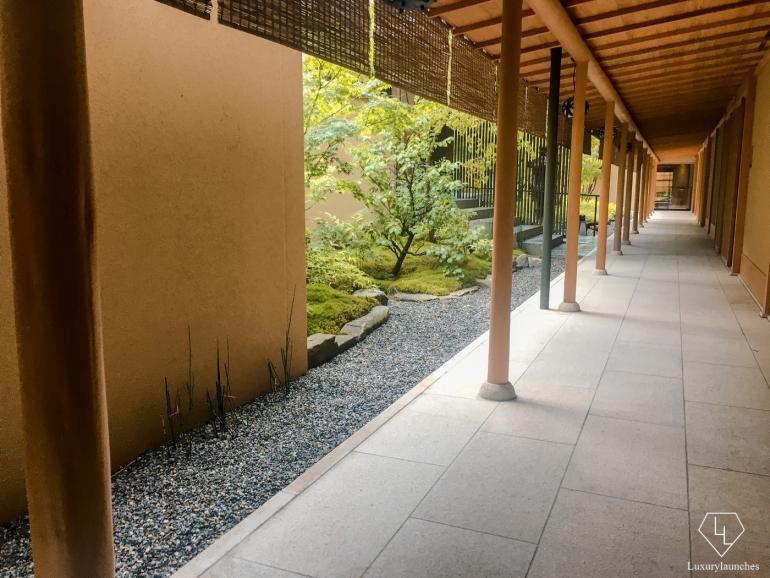 Accommodation
Thirty nine rooms in five different sizes are available at Suiran, from moderate twin rooms to four types of executive suites. Most of them offer views of the river and mountains and a few with its own open air spa baths with “onsen” (Japan’s natural bubbling hot springs). Like the one I had in the Yuzunoha deluxe room that I checked into, which replaced spanning views of the hills with a pleasing garden view lined with maple trees.


In true Japanese style, the room was spacious yet designed in an elegant, minimalist fashion including lacquered furniture, Tashami floor mats, painted screens, wooden indoor clogs, traditional cotton kimonos hung up on bamboo cloth hangars. Low tables and chairs are placed facing the balcony with the garden in the backdrop. Evidence of the country’s love affair with technology included a remote-controlled toilet seat, well-equipped with toiletries from Laboratoire Remede.

Facilities
There are no gyms or fitness centres at Suiran. With acres of natural groves and gardens, this has no significance whatsoever. There is also no swimming pool, the lack of which is hardly felt thanks to two open-air bath houses with mineral water from the local hot springs that be hired for private use. One is Raku which is a cypress open-air bathtub and An, is a bath created with rocks. 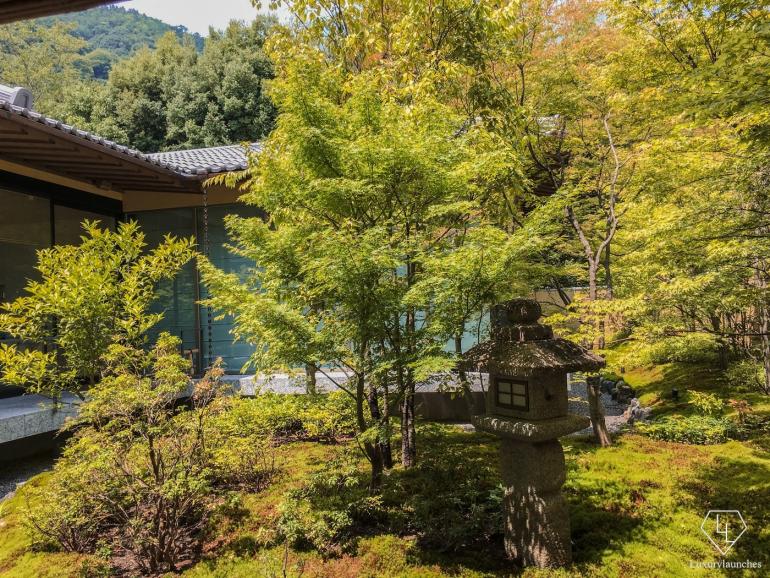 Dining
Suiran has two dining options. Situated at the heart of the hotel, Kyo-Suiran offers an experience like no other in its traditional settings. It offers kinshu, a 12-course set menu which I hear is very popular. Being a vegetarian, I opted to go for a la carte. This is also where breakfast is served, both Japanese and Western. The executive chef uses influences from Europe where he spent some time at an olive farm and fell in love with the region’s cuisine. 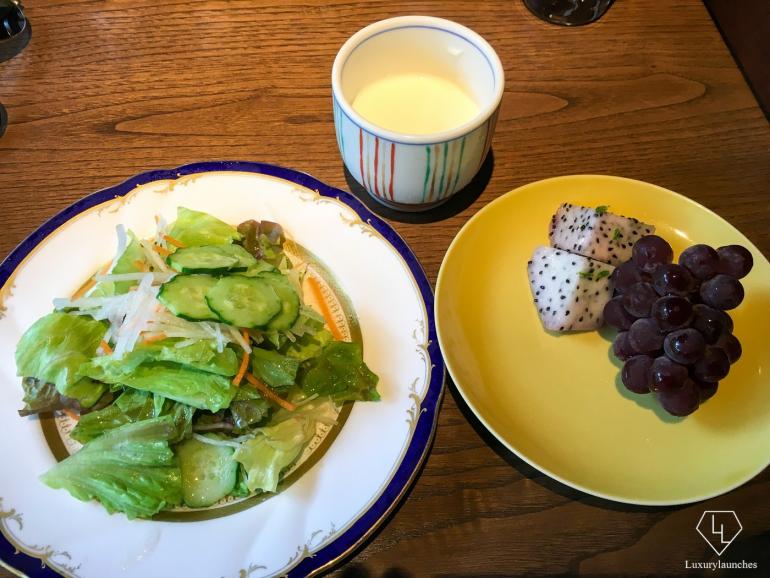 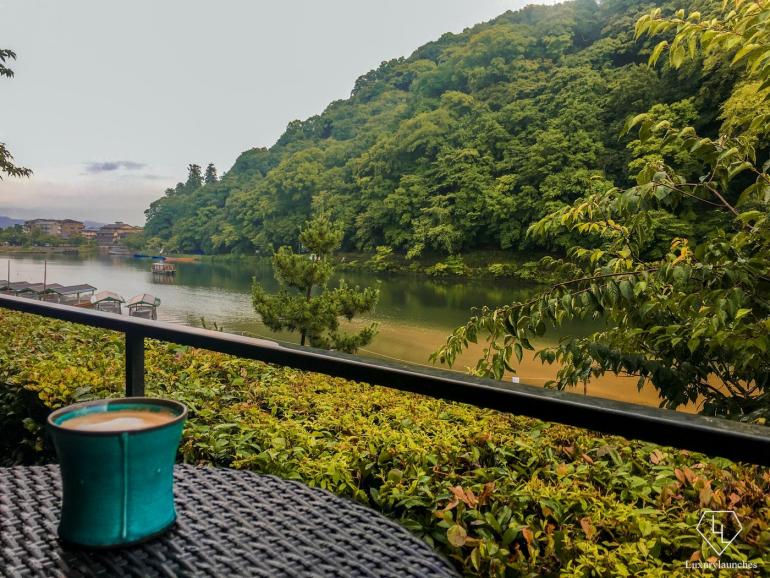 Cafe Hassui is situated in a 100-year old building and has a terrace area offering great views of the river. Japanese snacks and sweets are served here but the afternoon tea is highly recommended. 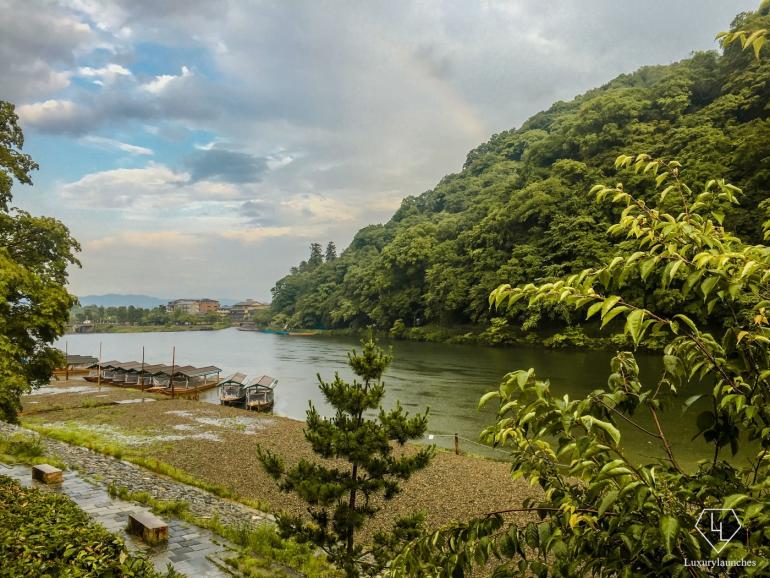 Verdict:
Suiran is not the usual polished luxury hotel. It is a destination of its own that takes you back a few centuries into the past and lets you experience the ways of life from ancient Japan and most importantly gives mind, soul, and body a sense of awakening.