Upon arrival at Shanghai’s Hongqiao airport, we were greeted by a Peninsula employee who took our luggage and walked us to the parking lot. In two minutes, Rolls Royce Extended wheelbase Phantom in shiny Peninsula green (its own custom color) drove to us. It was my first time in a Rolls; with that amount of space, plush leather, veneer, a well-curated music library, iPads, telephone and Internet connectivity I can say that it is one of the most luxurious transfers you can ever experience. After a 40-minute drive, we arrived at the tip of Shanghai’s historic Bund, the Peninsula Shanghai could not have picked a better spot.

First impressions –
Opened in 2009 the Peninsula Shanghai houses 235 rooms in a new 14-storey building. With old French and British design elements, the building pays homage to Art Deco architecture while blending in beautifully with its neighbors on the Bund.

Interestingly, it is the first major construction on the Bund in over 7 decades.

After passing through the revolving doors, we stepped into a palatial lobby that was lit by floor-to-ceiling windows overlooking the beautiful gardens of the former British consulate. Paying a homage to Art Deco, The ground floor elevator doors had a steampunk-themed mural of a modern city with a contrasting turn-of-the-century-styled circular floor indicator. On reaching our floor, we were escorted through a labyrinth of subtly lit passages to our room which was the Deluxe River Suite. Associated with a so-called VIP status, one of the benefits of our suite was a comfortable and convenient in-room check-in.


Through the large windows, the living room offered magnificent views of the Bund, the busy Huangpu river, and the futuristic Pudong district, which lights up with Neon during the night. For our further viewing pleasure was a gothic-styled telescope, it does take some time to get used to seeing through the small viewing hole, but once you manage to track a brightly lit river cruise boat, the efforts are well worth it. With the desk and dining tables offering such views it was very difficult to leave the room.
Like the rest of the hotel, even the room tries to create the look and feel of the glamorous era of 1920’s and 30’s when Shanghai was known as the Paris of the East. Set in tones of cerulean blue and ivory, the design perfectly mixes Art Deco details like chandeliers, ebony furniture, and decorative lamp stands with elements of Chinese heritage like hand painted panels on black lacquer TV cabinet, and traditional artwork. All of this is further topped with generous use of carved glass and polished chrome.
Along with style and glamour, Peninsula Shanghai has placed equal importance on technology. Our suite was scattered with a host of well-lit and easy-to-understand control panels which could control the temperature of both the rooms, drapes, mood lighting, and even set the humidity. Both the rooms had a 46-inch LED television which came with a special motion-activated remote control that automatically lit up when touched. Apart from free broadband, the hotel also offers a VoIP phone which offers free unlimited calling to any number in the world, goodbye long distance, and Skype. If calling to your loved ones does not make you feel homely, then you can make use of the Internet radio to listen to popular tunes and news from back home. Along with the phone and the radio, the working desk had a weather station, iPod dock, and a photocopier/fax machine. Yes, apparently, the latter is still in use.

The soundproofing and insulation of the room was such that once inside we forgot that we were right on top of the busiest parts of the city.

The bed was such that you could just sink into it, and facing it was the TV cabinet stocked with coffee table books. Cabinets on either side of the bed had the usual power sockets, controls, and USB sockets for the smartphone generation.

The spacious walk-in closet has a seated dressing table and a valet box which allows you to leave things for the valet without having him/her come to your room. Just place your laundry, shoes, etc. in the valet box, press a button, the valet will collect it, and the small light will be lit again once the valet has dropped something.


Like the rest of the suite, the bathroom perfectly blends style and technology. Adorned in cream marble, the bathroom was stocked with Oscar de la Renta toiletries. The soaking tub was the highlight of the bathroom, above it was a beautiful and intricate hand carved floral design and next it was a long backlit control panel for making phone calls, controlling the TV, music, and lighting. If you are in the mood for some relaxation, then there is a nifty spa button that activates the do not disturb sign while dimming the lights and playing some soothing music.

Specials –
Unlike most hotel properties, the Peninsula Shanghai does not have a lounge that serves complimentary snacks, drinks, etc. Like some of the other suites, at our disposal was one of the hotel’s two bespoke Mini Cooper S Clubman cars. Every day for two hours we could get a chauffeur-driven Mini, perfect for some nearby sightseeing, shopping or just a ride on the Bund. 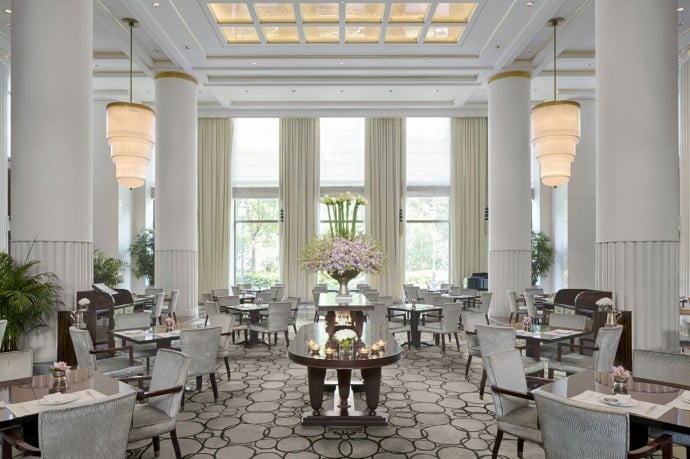 Food and drink –
Like every Peninsula hotel, the breakfast was served at ‘The Lobby’, high ceilings, giant artistic murals, and large windows overlooking a garden it was designed to depict the house of a nobleman from the 1920s. The menu had popular American, English, and Chinese breakfast offerings with a moderate spread of bread, cereals, and sweets at the buffet.

The brand’s strong presence in America was evident with a large number of Westerners in the lobby.


For lunch, we indulged in some fine Cantonese cuisine at the coveted chef’s table at the Yi Long Court. With a round table, the private enclosure had a window and a large TV which offered a live view of Chef Dicky and his team in action. We were joined by the Peninsula’s regional director of communication Ms Cecilia Lau for an experiential tasting menu that started with vegetable dumplings and spring rolls and moved to mouth-watering stir-fried noodles with bean sprouts and yellow chives in dark soy sauce and ended with Creamy mango juice with sago and fruity Chinese petit fours. Keeping us further company was Château de La Dauphine a rich natural red wine specially made to commemorate the hotel’s 5th anniversary in October this year. 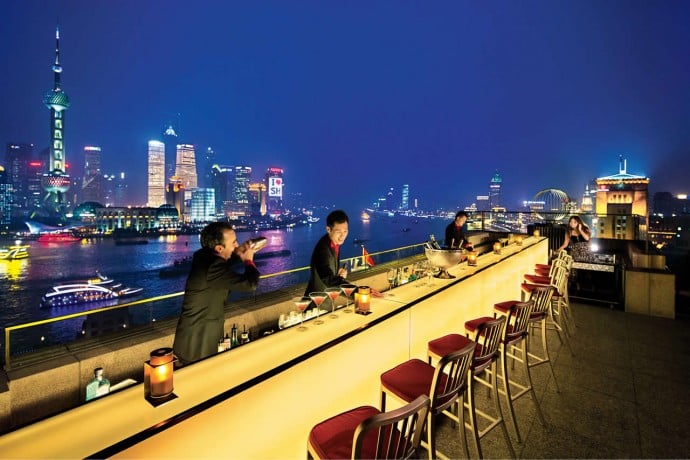 There are rooftop bars, and then there are rooftop bars; this is the latter. On the 13th floor and with views like these, there is no doubt that Sir Elly’s Terrace is one of the most popular bars in the city with locals and tourists alike. I tried out the Long Island tea, which was passable, although the munchings could have been better. Tip – The bright lights of the Oriental TV tower and the rest of the Pudong are switched off at 11.00 pm, so if you are in for the view, do come in a bit early.

Offering similar views along with some award-winning European cuisine is Sir Elly’s restaurant. There is also a bar and a coffee lounge both of which are gorgeously decorated.


Facilities –
The Peninsula Shanghai has an outstanding indoor swimming pool inspired by ‘The Great Gatsby’, and does it relive the decadence from Fitzgerald’s novel? It most certainly does. Packed with amenities, the changing room also had a dryer, which dries the swimming costume in a jiffy.

On the same level is the gym and the Peninsula Spa which offers a variety of indulging and relaxing massages.

If you are in the mood to splurge, then there is the Peninsula Arcade which has over 25 international luxury brands like Chanel, Ralph Lauren and Versace.

Verdict –
A location like none other, tech-laden spacious rooms that ooze class, world-class facilities, top-notch restaurants complimented with a well trained and helpful staff make the Peninsula Shanghai one of the best hotels in China.

I tried my best to limit the words best and perfect, but with the Shanghai Peninsula, it is just not possible.

The entire staff be it the chauffeur, waiter, room service, or front desk, goes the extra mile to make you feel special.
Though priced slightly on the higher side, every penny you spend is worth it at the Peninsula Shanghai.

Note – The Deluxe River View suite costs 7400 + CNY ($ 1200) per night. We were provided complimentary accommodation and services. But the opinions expressed herein are my own. 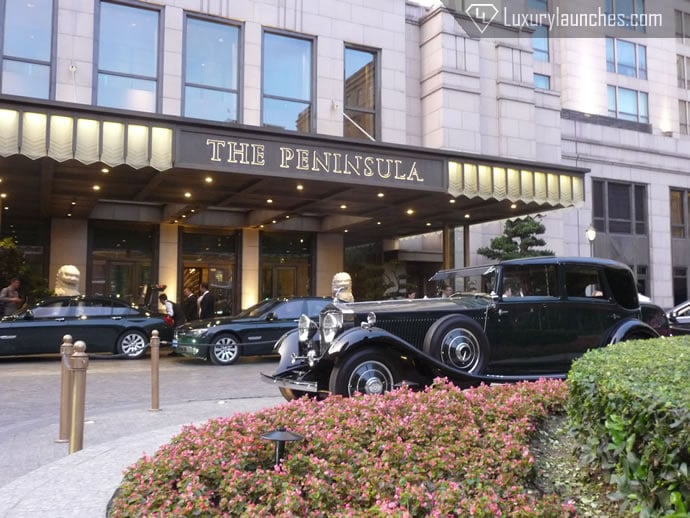