In today’s day and age there are plenty of things reserved for the rich and or famous; from cars to homes, boats, planes and of course, technology. And owning any of these objects lends an aura of refinement and elegance to your, perhaps already, refined and elegant position in society.

One such item is a Vertu mobile phone which is more of an object d’art rather than a mere piece of tech hardware. And while most of today’s exclusive/designer type handsets are coated in diamonds, gold, Swarovski Crystals, and such, sometimes with laughable specifications, the Vertu Signature Touch does not follow suite and instead, has potential to be quite a game changer. It packs in some serious hardware into a shell of stunning craftsmanship made of the top of the line materials that are not just for show. We’re here to give you a slightly closer look, and to ensure you get the feel of true svelte grace, strength and exclusivity, Audi very graciously loaned us the fabulously fast RS5 Coupe for a photo shoot with the Signature Touch. It was the perfect setting for the phone to be photographed and we’d like to extend our thanks to the car maker for the opportunity.

As striking as it looks the phone also packs some serious hardware.

We reviewed the Vertu Jet Calf edition, a stunning powerhouse decked out in black. 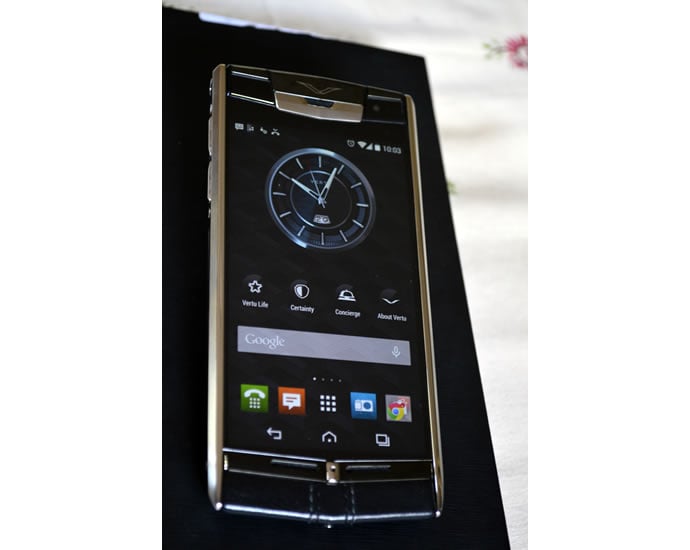 Hardware
To kick things off; let’s take a look under the hood of this gorgeous looking smartphone. Starting off with the Qualcomm Snapdragon 801 Quad-core processor clocked at 2.3 GHz, coupled with 2GB of RAM, the Signature Touch is no slouch and the refinement and speed can be witnessed in the smooth functioning of the device. Although this well crafted, hand-made (in England), Grade 5 Titanium forged and Calf-leather (or whatever other edition you prefer) clad smartphone is equipped with 64GB of internal memory, it has no memory expansion option. Not that it really matters, but for the price, you think a little microSD card slot would have been included. However, the Jet Calf Signature Touch does support USB on the go which does allow you to connect an external USB drive to the device via a dedicated cable. 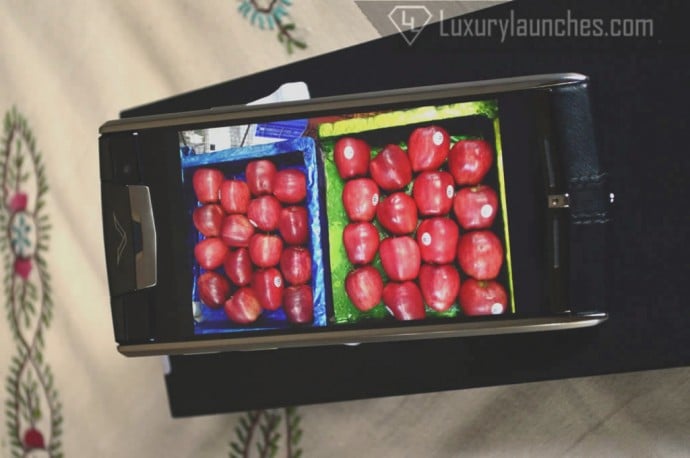 The absolutely stunning Sapphire crystal glass stretching over a 4.7-inch display is as tough (Gorilla Glass… pshaw!) as they come. The display underneath however, isn’t the most legible or vibrant as an AMOLED or Apple’s Retina display. Even though it has a full HD (1080p) resolution, the viewing angles are shallow. Purely from an aesthetic perspective, it looks great, but functionality-wise, it could have been better.

A forward-facing 2.1 megapixel camera is located above the display near the earpiece that rests comfortably on the elegantly polished black ceramic pillow that also shows off the company insignia. The premier camera is Hasselbald certified and produces images in the resolution 13 megapixels. The dual-LED flash should be quite handy for low light photography. Images looked great in full auto mode, however with settings like manual HDR mode, ISO options, exposure compensation, white balance adjustments etc, you have the ability to tweak your photos to an extent. On the whole, images were quite clear and crisp. 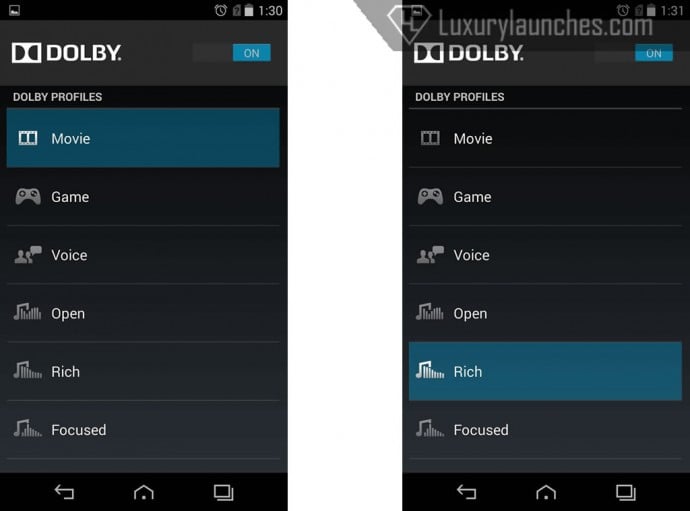 The speakers are the icing on the cake; big name players who specialise in audio, Bang and Olufsen, have created what we think, could be the speakers that deliver the best output ever heard on a mobile phone. They have been tuned for maximum volume without distortion. The little cherry atop the icing (if you thought it couldn’t get any better) is that audio is channelled through a Dolby Digital Plus virtual surround engine that makes movies and music really come alive.

The Vertu Signature Touch is the best sounding phone you can buy now. 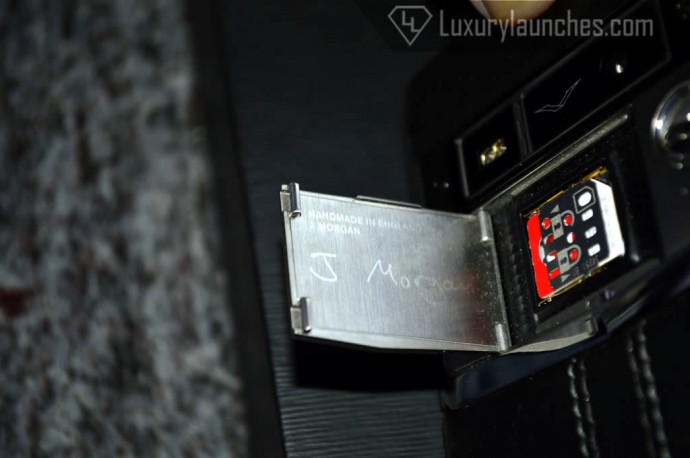 Vertu’s now almost signature SIM card slot, is revealed by the twisting of the little round clasp at the rear. Like a beautiful work of art or a Bentley (not that there’s much of difference in those terms), the insignia of the technician who assembled the phone is inscribed at the back of the SIM cover.

The handset also supports Qi wireless charging, NFC, Bluetooth 4.0, 4G LTE and of course, Wi-Fi.
On the whole, the slim, well designed Jet Calf Signature Touch has excellent grip; the metal on the side and leather rear offered a sturdy grasp and a solid feel even if the weight of all these premium materials made it difficult to carry around in a shirt pocket. Then again that’s why man made denims. 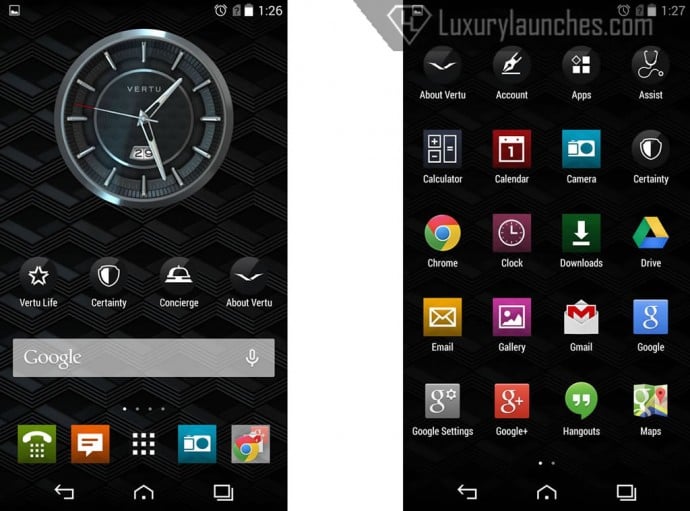 Software
Running Android KitKat (4.4) in its more or less rudimentary form i.e. stock, Vertu has however, incorporated minimal modifications. To be more precise, the only actual modifications are Vertu-centric apps which include their world renowned Concierge service access (dedicated button located on the side) that lets you speak to an actual human being (a personal lifestyle manager… we like the sound of that) for any of your lavish wants and needs, thus eliminating the need for some digital, robot sounding “ghost in the machine”. The 24/7 service is complimentary with the handset… for one year, after which it would cost you about $2800 per year to continue with the privilege. And yes, it is a privilege.

I guess if you can afford the handset, you could quite easily afford the service, but unless you already have a butler who can get you anything you want, anytime you want it, it’s simply an extravagance. The service can get you things like T20 tickets, last minute business class tickets to London or wherever, a last minute reservation at the city’s hottest restaurant, front row tickets to a sold out concert… or anything else, they will make it happen. 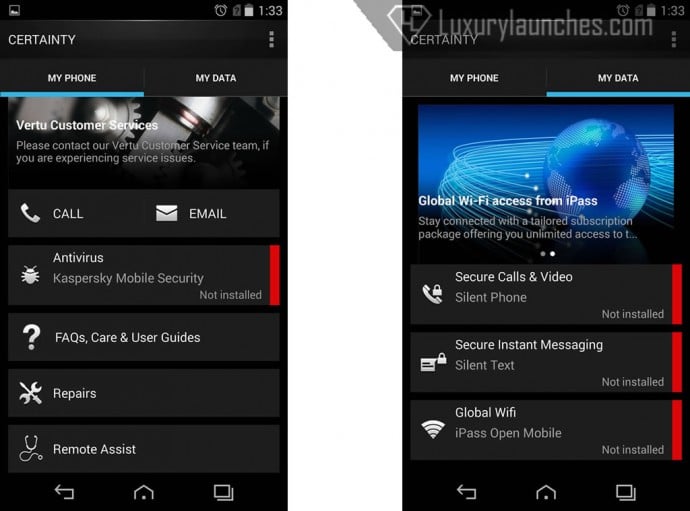 Vertu’s Signature Touch series also features the Certainty package. This is bundled with Kasperski security for your handset and their dedicated data with remote assistance that’s available worldwide. Through other functions like Silent Phone and Silent Text from ‘Silent Circle’, global Wi-Fi connectivity via iPass and more, your handset is totally secure and always connected safely, irrespective of where you are. It’s… how do they say it… state-of-the-art encryption. 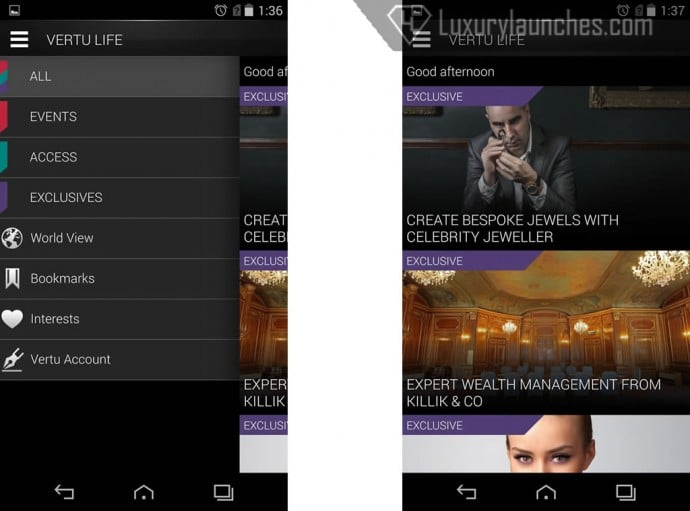 And then there’s the clincher, Vertu Life, which is what the company uses to ensure that you remain a valued customer for as long as you have money to support them. It includes a very exclusive set of “curated privileges” that give users access to special events that would normally be invitation-only. It even provides access to a few private members’ clubs. For the neuveau riche, this is great foot in the door.

A few more software tweaks include gyroscope responsive wallpapers and a 3D analogue clock. Other than that it’s just good old Android. 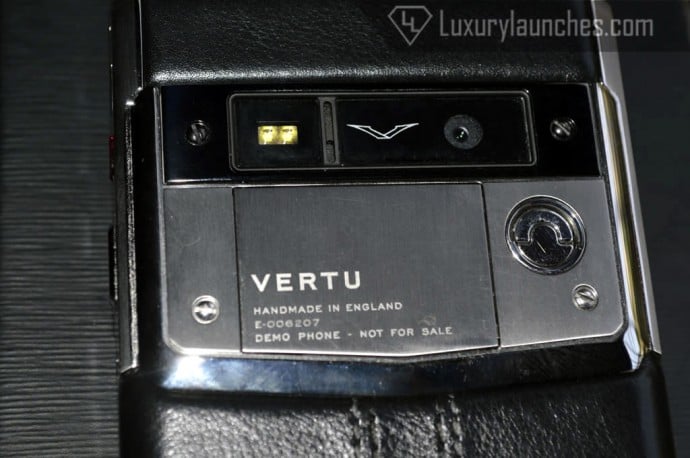 The Bottom Line
It’s not so much a phone, as much as it is a lifestyle on its own. Then again that’s pretty much what Vertu has outlined as their primary USP. The exclusivity of owning a handset that’s not mass produced, coupled with the privileges of the services the company provides, give Vertu the respect it so deserves. The specifications of the Signature Touch are not those to be trifled with and it could quite easily stand up to some of the better devices out there right now.

It is well crafted, tough as… well titanium, feels good and comfortable to handle even if it is a tad heavy, has no issues with the OS, takes great pictures and sounds absolutely divine, with further thanks to the ringtones and sounds that happen to be recorded by the esteemed London Symphony Orchestra exclusively for Vertu and you. And let’s not forgot the exclusive services as well.

And how much will this cost you ask? I mean should you really? But for the sake of being thorough, the Vertu Signature Touch range starts from $10,300 for the base model, and goes all the way up to a whopping $21,900 (INR 750000) for the high-end Pure Jet Red Gold edition. But like we said, you’re not just buying a classy piece of hardware; you’re buying a lifestyle that comes with it.