Audi’s flagship SUV, the Q7, has been with us for quite a long time now, and the luxury crossover launched back in 2005 desperately needed a complete overhaul. The German automaker has finally unveiled the second generation Q7 that is set to one of the bigger launches at the 2015 Detroit Motor Show. Audi is bringing major changes to the 2015 Q7, including new technology, spacious interior, and a much more lightweight body. In fact, the Q7 has gone on a serious diet and lost a whopping 716.5 pounds lighter than its predecessor. The Q7 has an ultra-high-strength steel backbone in what Audi calls the “occupant cell,” and aluminum castings, extruded sections and panels are used in the front and rear of the body. 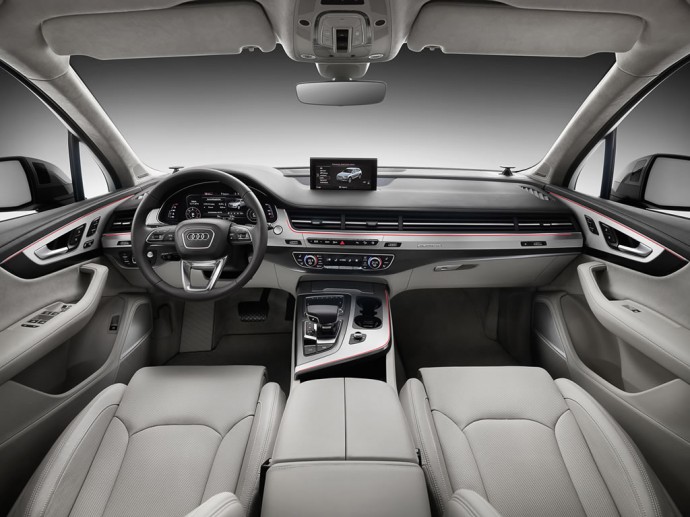 Coming to the styling of the new Q7, the fullsizer looks a lot sharper than its bloated predecessor thanks to re-styled frontend and crisp bodylines. The styling of the car shows new design philosophy that now sees its cars moving away from rounded edges to sharper features. The headlights can now be configured in the form of Xenons, LEDs or matrix LED headlights. However, the biggest improvement in the new generation model is its reworked interior, which looks fresh and modern.

In Europe, the Q7 will launch with two V6 engines. The first is a 3.0-liter TDI turbodiesel unit rated at 272 horsepower and 442 lb-ft. of torque. It will propel the Q7 from zero to 62 mph in 6.3 seconds while allowing it to return 41 mpg in a mixed European cycle. The second engine available is a 3.0-liter gas-burning TFSI that makes 333 horsepower and 324 lb-ft. of torque. The TFSI lowers the 0-60 time to 6.1 seconds and returns 30 mpg in a mixed cycle. Audi has also confirmed the availability of a de-tuned TDI rated at 218 horsepower and 368 lb-ft. of torque and 2.0-liter four-cylinder TFSI that makes 252hp and 272 lb-ft. of twist. All engines will be coupled to an eight-speed tiptronic transmission that spins all four wheels via Audi’s quattro all-wheel drive system. A diesel-electric plug-in hybrid drivetrain will be added to the Q7 lineup later in the production run. It will consist of a 3.0-liter TDI V6 that works with a compact electric motor integrated into the eight-speed gearbox to produce a total of 373 horsepower and 516 lb-ft. of torque. The pricing and other details will be announced at the Detroit Motor Show.