Audi introduced the 2015 TT and TTS (only the hardtop versions) at the Geneva Motor Show earlier this year and we absolutely loved it. The 2015 Audi TT is a lot better looking than its predecessor according to me. With only a couple of days left for the 2014 Paris Motor Show to kick-off, the German automaker has revealed the convertible version of its compact sportscar. The 2015 Audi TT Roadster and TTS Roadster both will make its debut at the Paris Motor Show, and as you would expect models remain extremely similar to their hardtop counterparts of which sales began earlier this year. But the convertibles look a tad bit better than the coupes. 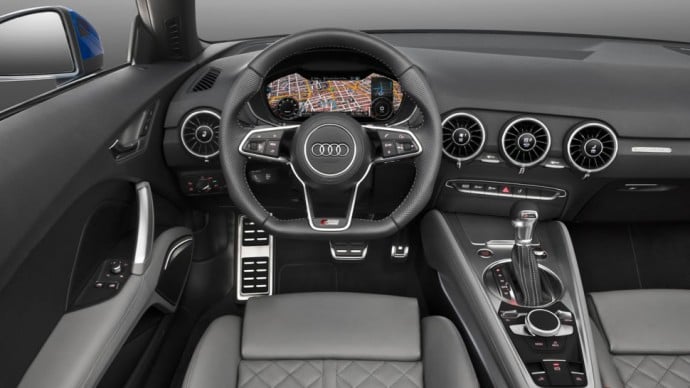 The exact same engines as the TT coupe are available in the 2015 Audi TT and TTS Roadster variants; the entry-level model comes with a 2.0-litre TDI Ultra diesel engine delivering a total of 181 hp and 280 lb-ft of torque. On the top of the range is the TTS Roadster that has a thoroughly uprated 2.0-litre TFSI petrol engine tuned to churn out a total of 306 hp as well as 280 lb-ft of torque. The 2015 Audi TTS Roadster will sprint to 100 km/h in a respectable 4.9 seconds as well as an electronically limited top speed of 250 km/h. Both the new 2015 Audi TT Roadster and TTS Roadster versions will utilize more traditional fabric tops with the frames finished in either black or titanium grey. There is no word on the pricing yet.