Unlike the rest of the range, Bentley’s flagship model Mulsanne has typically been left out of the performance-oriented upgrades from the automaker because it has always been more about ultra-luxury driving experience rather than packing more power into it. Moreover, the car’s 505-horsepower isn’t insufficient in any way but the British marquee has decided that its flagship model needs a more performance-focused variant and introduced the new 2015 Mulsanne Speed, which has been revealed ahead of its world debut at the 2014 Paris Auto Show next month. The new Mulsanne Speed comes with the Bentley’s venerable 6.75-liter V-8, but output has been increased up to 530 horsepower and 811 pound-feet of torque, the latter of which is delivered at just 1,750 rpm. That’s up on the regular Mulsanne’s 505 hp and 752 lb-ft, and is enough to propel the big sedan from 0-60 mph in just 4.8 seconds and attain a top speed of 190mph. Considering the Mulsanne Speed weighs almost 6,000 lbs, the performance figures are just amazing. 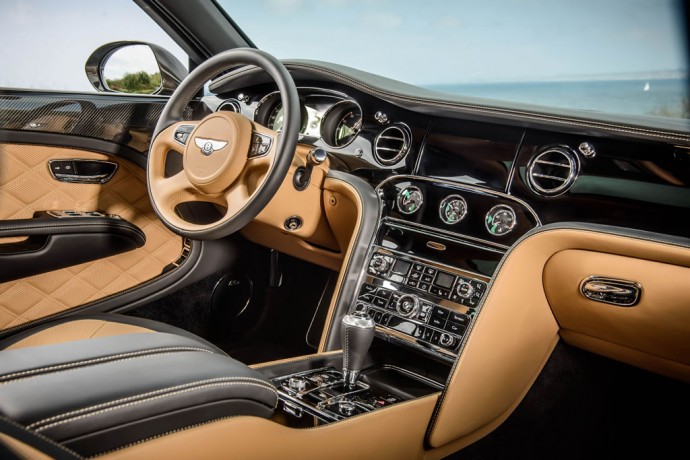 The improvements are not just limited to upgrade the performance. In fact, the efficiency of its V-8 has also been improved by 13 percent, based on CO2 emissions. The Mulsanne Speed emits 342 grams of CO2 per kilometer, with the efficiency gains translating to about 50 more miles of driving range from a single tank. Bentley quotes fuel economy of 12/19 mpg city/highway and 14 mpg combined. The Speed also gets a firmer Sport mode for its steering and adaptable air suspension. The cylinder deactivation system, that runs the engine as a V4 during light load, has been re-tuned for smoother transitions between V8 and V4 for even greater refinement. This work combines with a new gearbox control strategy and the engine hardware improvements to give a new level of efficiency for the Mulsanne engine. In terms of styling updates, the luxury limo has dark-tinted grilles and lights, directional 21-inch wheels and a two-tone with the Mulliner Driving Specification fitted as standard. “Speed” badging also adorns the front fenders and door sill treadplates. The Mulsanne Speed makes its official debut at the Paris auto show next month before going on sale early next year. There is no word on the pricing as of yet.