The new redesigned 2016 Jaguar XF Sedan is all set to make its debut next week at the New York Auto Show. The British marquee released a slew of images and details on the car ahead of the official unveiling alongside a high-profile stunt over London’s Canary Wharf. Jaguar introduced the second-generation model of the XF sedan in an incredible fashion through a high-wire drive over water performed with the help of British stuntman Jim Dowdall who has worked in the James Bond and Indiana Jones franchises. Jaguar said the stunt will “highlight the lightweight and agile credentials of the new XF”. 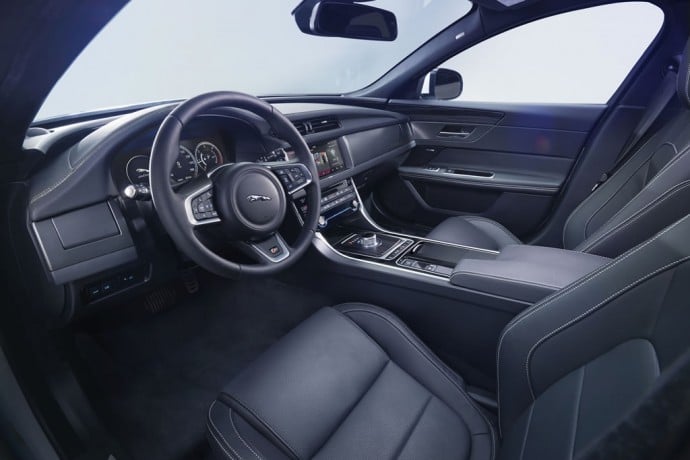 The styling of the 2016 Jaguar XF is evolutionary. It looks quite similar to the current model but the proportions of the car have been altered. The wheelbase has been stretched by two inches, although the new model is 0.3-inches shorter and 0.1 inches lower. Riding on an elongated version of the XE’s iQ[Al] platform, a total of 75 percent of the XF’s body is made from aluminum, which has reduced the curb weight by 132 pounds on the rear-drive model and 265 pounds on the all-wheel-drive variant. The company’s new Ingenium four-cylinder diesel and petrol engines will be introduced to the range, joining the 3.0-liter diesel and supercharged gasoline V6 units, with a supercharged V8 to power the high-performance XFR and XFR-S models. As for the cabin, a new eight-inch touch screen is standard and a larger, ten-inch unit is optional. The latter is promised to pack a faster processor and Ethernet connection. Have a look at the video released by Jaguar after the jump.