Mercedes-Benz has finally taken the wraps off the all-new S-Class flagship luxury sedan. The S-Class has always been a pioneer in bringing in new technology in the automotive industry, setting new standards for its peers to follow. Expectedly, the new S-Class is no different and is absolutely packed to gills with the latest cutting-edge technology. Here’s a list of 12 things you need to know about the 2021 Mercedes-Benz S-Class. 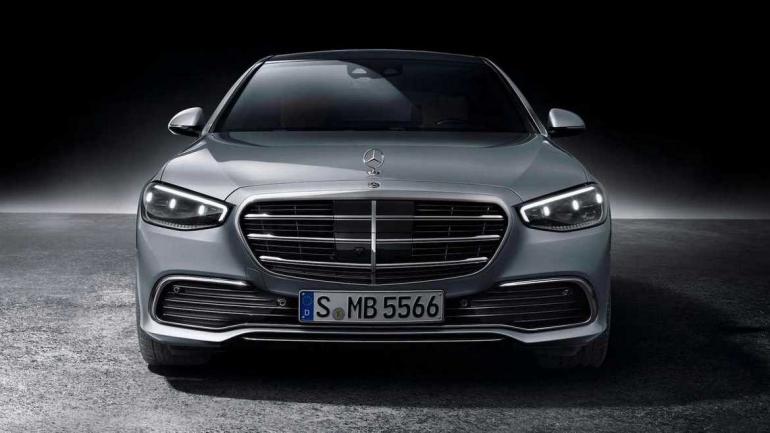 New 2021 Mercedes-Benz S-Class gets completely new styling
A plethora of spy shots, teasers, and design renderings revealed by Mercedes-Benz ahead of the launch already gave us a fair idea of the fresh styling of the new S-Class. The design has been completely updated in accordance with the German automaker’s new design direction, which can be found on all the new Mercs including the facelifted E-Class. The most prominent styling elements of the new design philosophy are the slim headlights that appear to narrow down close to the grill and wrap-around taillights that sit flush to bodywork, creating a clean, free-flowing design. Another highlight of the updated design is the new grill which is bathed in chrome and gets three horizontal blades making it look sportier. In addition to the grill, many other exterior elements get the chrome treatment including the big air intake at the front, continuous strip that runs along the sill, door surrounds, and a thick bar connecting the tail lamps. 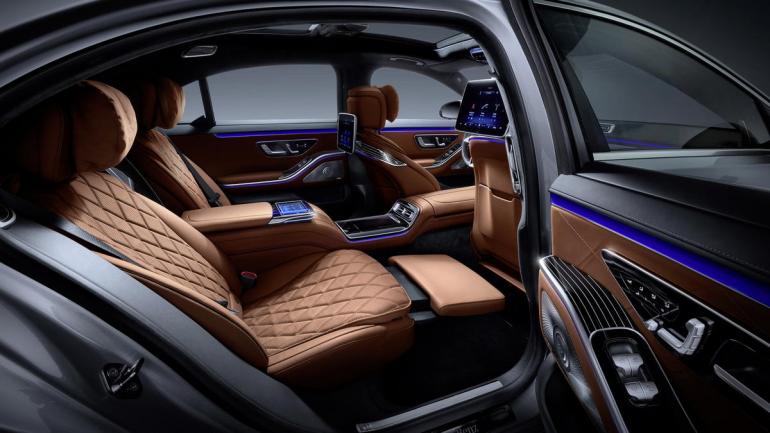 The new S-Class takes passenger comfort to the next level
Just about everything on the S-Class is practically centered around the rear-seat passengers and making their ride experience as comfortable and enjoyable as possible. Naturally, one will expect Mercedes will channel its engineering prowess to make their rear seats best in the world. The 2021 S-Class, according to Mercedes, has a total of 19 internal motors fitted into each individual seat. Out of them, eight are for various adjustments, four for the massage function, five for ventilation, one for lumbar support adjustment, and the final one is for moving a monitor attached to the backrest. Also new for this year is a heatable cushion on the headrest that keeps the passengers warm and cozy. The occupants of the car can select from 10 different massage programs that work in conjunction with new “Energizing” options. 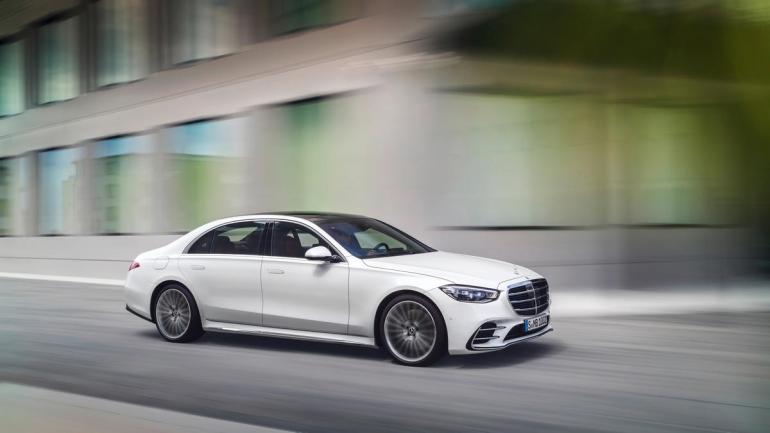 The new S-Class is one of the most aerodynamic cars money can buy
The new S-Class has grown in proportions in every dimension as compared to the outgoing model. It is longer by up to 1.3 inches in the long-wheelbase model, wider by up to 2.0 inches, and taller by about 0.4 inches. The wheelbase has also gone up by 2.0 inches, opening up more room for the rear passengers. Despite the increase in size, Mercedes has been able to create one of the world’s most aerodynamic cars, especially in its segment. It has a drag coefficient of just 0.22, which is even lower than the Tesla Model S with a drag coefficient of 0.24. 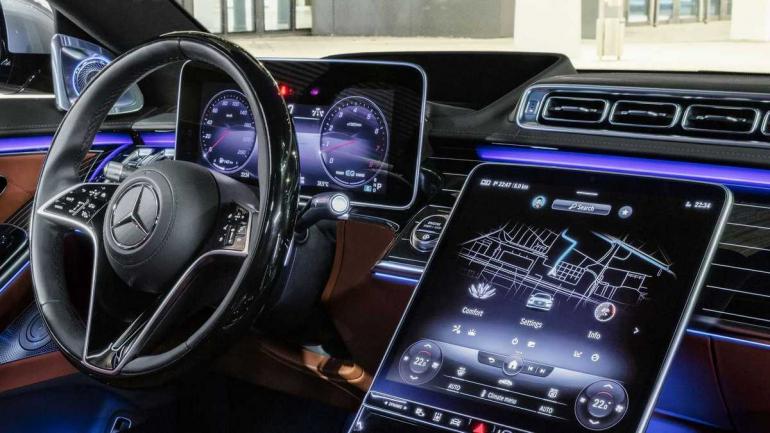 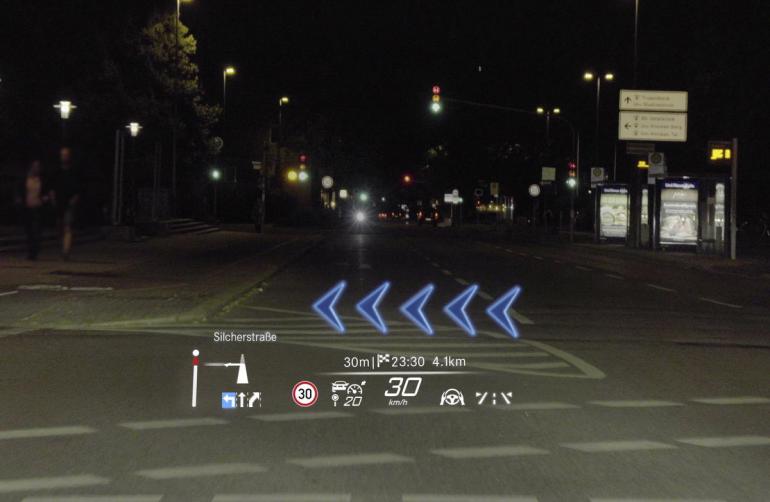 The 3D digital dash and augmented reality HUD add video-game-like elements to the driving experience
The 3D digital instrument cluster and the head-up display (HUD) featuring augmented reality are so cool that they needed a standalone point. Digital instrument consoles have become a common feature, at least in premium and top-end cars. However, Mercedes went one step ahead and added 3D feature to the display unit, which can be simply switched on and off with the press of a button. The 3D effect works without the use of special glasses or any other accessory and makes different graphics on the display appear at varied depths. To further add to the driving experience, the HUD unit in the flagship sedan is equipped with AR and reads the road ahead and conditions to project interactive direction signals and other info directly on to the windscreen – similar to what we see in many video games. 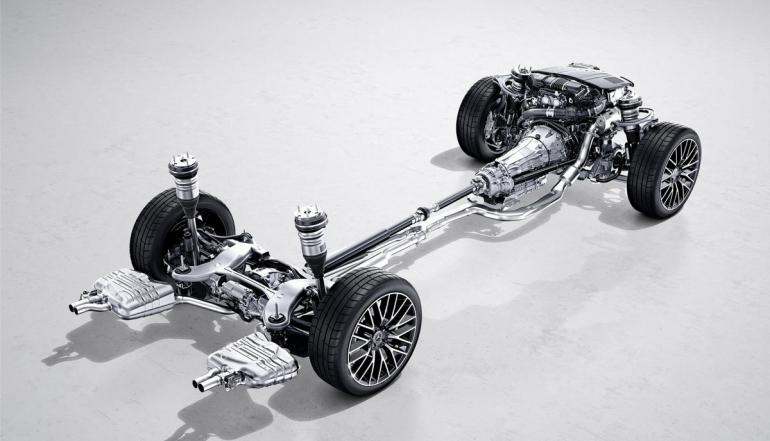 The 2021 S-Class gets best in class safety features and rear-axle steering
Mercedes has equipped the new S-Class with industry-first features to make it one of the safest car money can buy. Ahead of the launch, the German automaker announced that the new flagship model will be the first to get rear-seat airbags for added passenger safety. Additionally, the luxury sedan gets E-Active Body Control suspension with a Pre-Safe Impulse side function that lifts the car up by 80mm when it detects an impending side-on crash. The new S-Class also gets rear-axle steering that can turn the rear wheels by 10 degrees, giving it a turning radius of a hatchback at slow speeds and added stability at higher speeds. 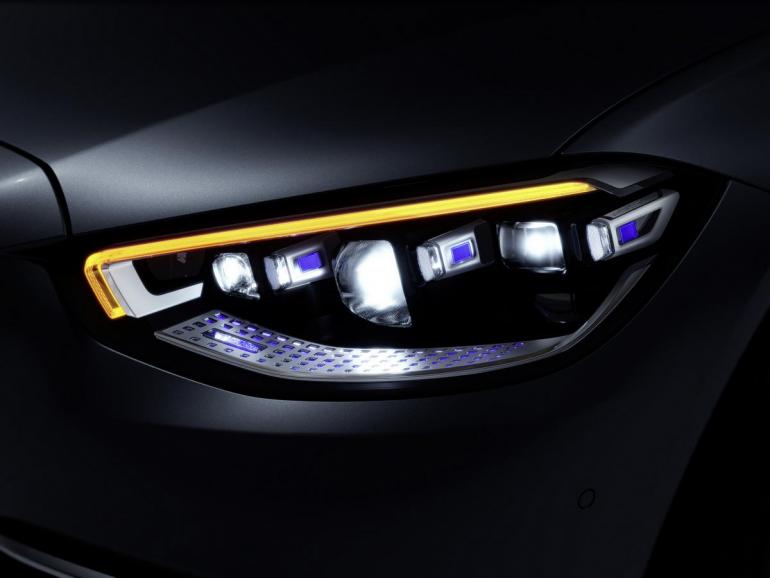 The new headlights are loaded with tech
Mercedes has not only updated the design of the headlights but also equipped it with cutting-edge technology. The adaptive LED headlights are equipped with something called ‘Digital Light’ technology. With the help of three powerful LEDs and 1.3 million micro-mirrors, the headlights are capable of projecting different symbols and even grid lines onto the road. It can also effectively blank-out selective objects in front if it wants to. This system will be most useful as a safety feature by projecting warning symbols ahead. 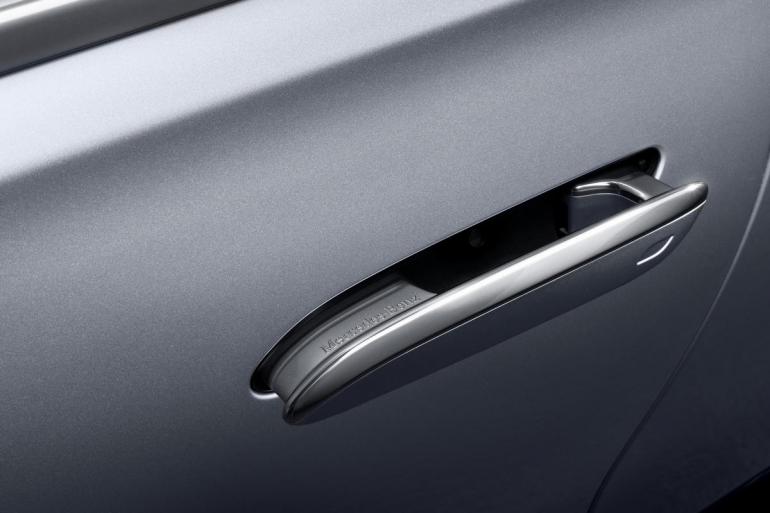 The new generation flagship sedan comes with pop-out door handles
A big contributor to the low drag coefficient of the new S-Class is its door handles that still flush with the bodywork. We know that door handles add a lot of aerodynamic drag by disturbing the airflow around the bodywork – a reason why many automakers are moving flush door handles. However, this being an S-Class, the door handles automatically pops out when the car is unlocked or it senses key fob in close proximity, and it retracts back to its position once the car is locked or is in motion. 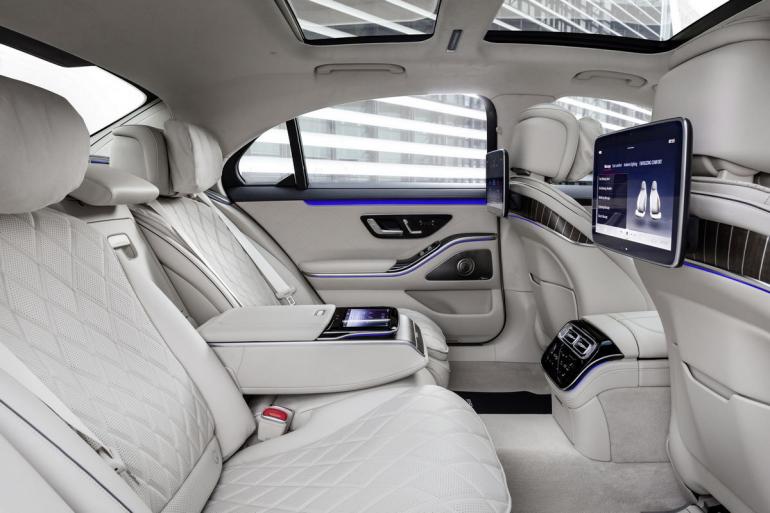 The new S can be optioned with up to 5 screens
While the exterior design of the new S-Class is more understated than its predecessor without attracting too much attention, its inside the cabin which is meant to blow your mind with its tech-loaded and beautifully crafted design. One of the main attraction of the new cabin is the massive 12.8-inch floating OLED touchscreen display in the center which in stacked vertically and is meant to take care of the settings and functionality. The second display in the front is the curved digital dash that 12.3-inch display with new engaging graphics (more on that in the next point). The rear seat passengers get individual screens attached to the back of the front seats and a central tablet-style display in the central armrest that can be removed from its holder and used to control all the functions inside the car. 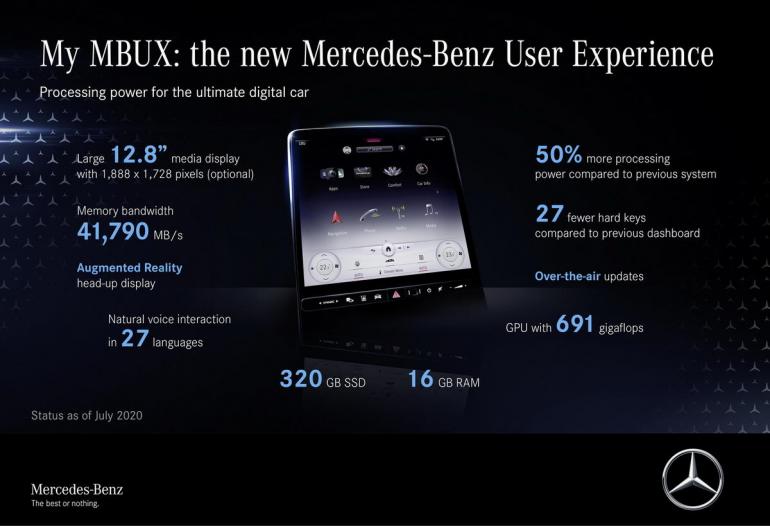 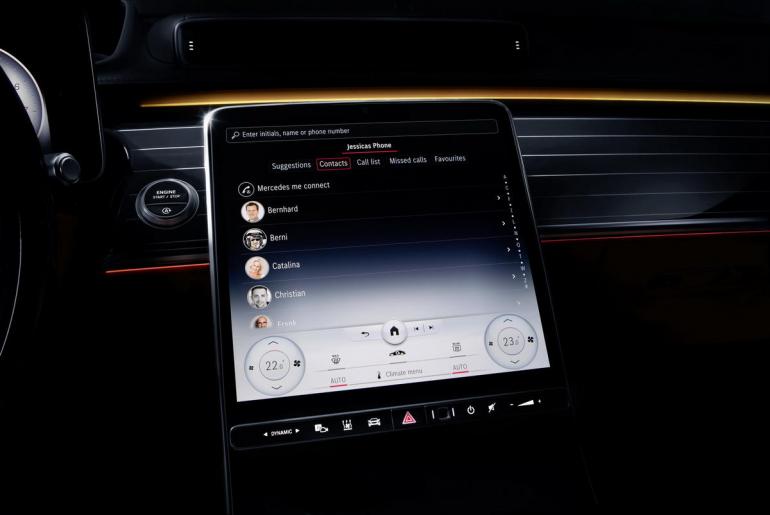 The latest generation MBUX infotainment system is ultra-futuristic
The new second-generation MBUX infotainment system is a massive step-up from the previous version. According to Mercedes, the future is in organic interaction with the infotainment system with the help of gestures and voice commands, and this new direction’s effective implementation can be seen in the new S-Class. It has 27 fewer buttons and other physical controls that are replaced by digital substitutes. However, Mercedes wants its customers to use more voice commands and gestures to control the functions, a reason why it has several microphones placed at all corners of the cabin. The new MBUX system also now understand voice commands in 27 languages to help it work seamlessly in non-English speaking countries as well. The new S-class also features fingerprint, face, and voice recognition which can be used for seamlessly switching between profiles allowing a whopping 800 different individual settings. For audiophiles, the flagship gets a new Burmester “4-D” surround sound system that uses 30 speakers and eight resonators inside the seats that benefit from ‘sound resonance’ for a more ‘tangible’ listening experience. 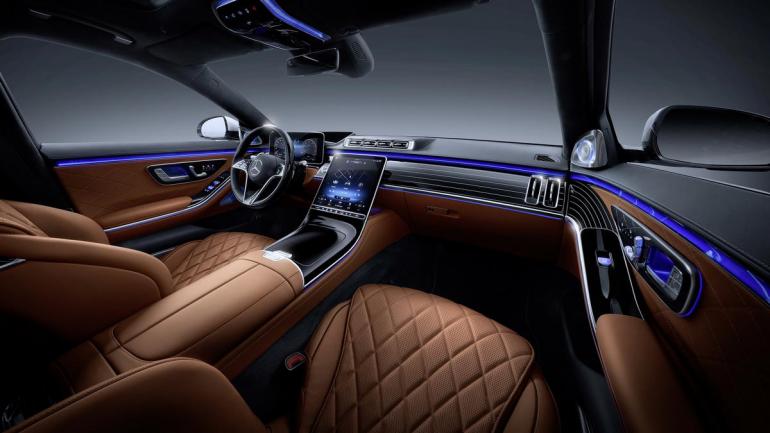 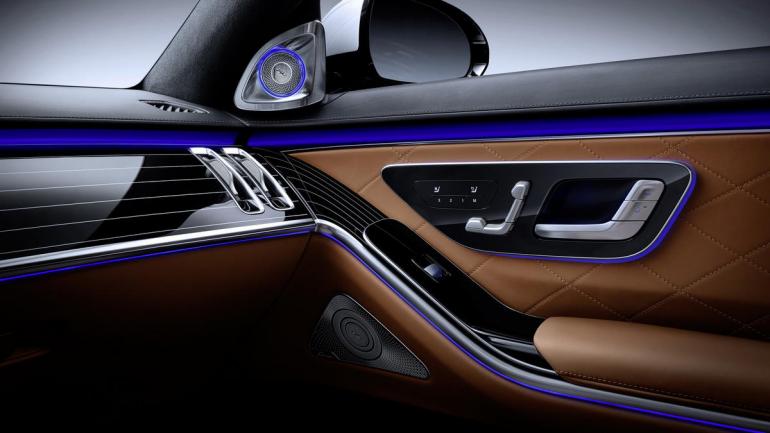 The new ambient LED lighting system sets a new standard
S-Class has always been the pioneer of introducing new technology into passenger cars and the new-generation continues with that glorious tradition. The new ambient lighting system in the 2021 model is a work of art combined with a fragment from a sci-fi movie. The system features a continuous strip that wraps around the entire cabin along individual elements highlighting several design features inside the cabin. There’s an LED within an optical fiber every 0.6 inches and a total of 250 fiber optic networks are scattered all throughout the cabin. The whole system is active and works with different functions of the car to produce a very interactive experience. For example, the light strip just above the central display actively responds according to the inputs on the infotainment system and the whole system turns red in case it senses an unsafe opening of the door or a car in the blind spot. 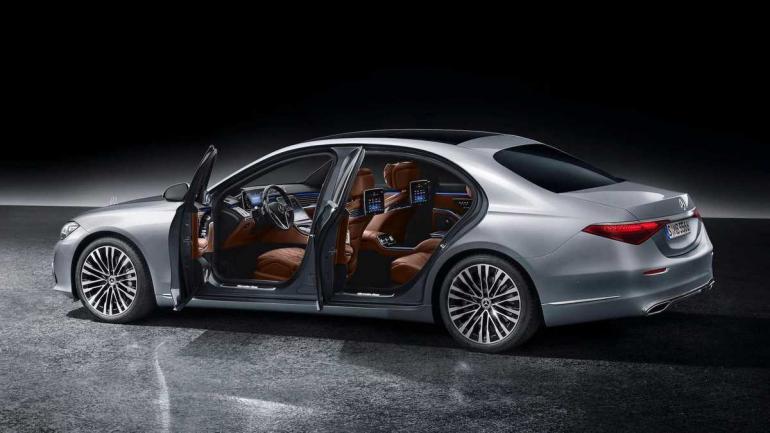 The new-generation S-Class won’t get a V12 engine option
Mercedes has announced multiple engine options that will be available at different markets in the world, including 3.0-liter six-cylinder petrol and diesel engine options in different states of tune. For the US, the base Mercedes-Benz S500 will arrive with a turbocharged 3.0-liter inline six-cylinder engine with an integrated starter-generator with EQ Boost, which gets 429 horsepower and 384 pound-feet of torque. The S580, on the other hand, gets the twin-turbocharged 4.0-liter V8 good for 469 hp and 516 lb-ft of torque. Both variants will come equipped with nine-speed automatic transmission and have Mercedes’ 4Matic all-wheel-drive system. There won’t be a top-of-the-line V12 option in the new-generation S-Class thanks to the ever-tightening emission regulations and falling demand. The Mercedes-AMG S 65 Final Edition was the last S-Class variant to feature the monstrous AMG-tuned V12. 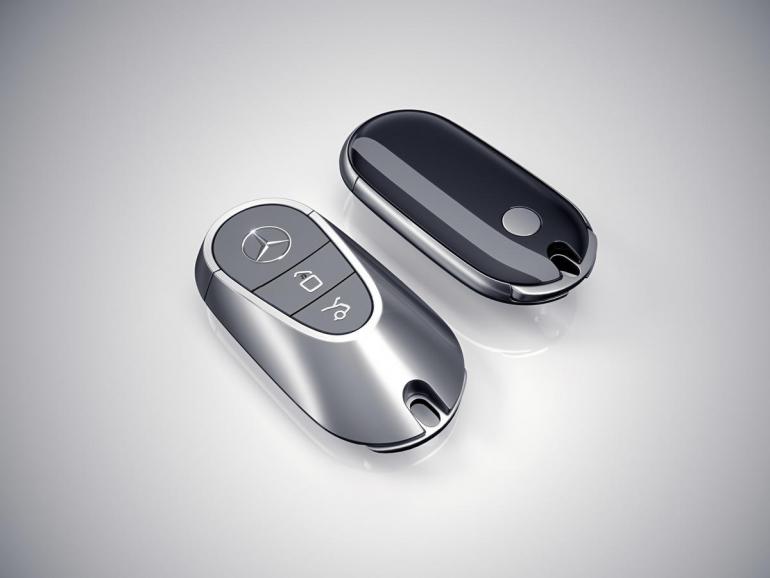 The 2021 model gets a cool new key fob
We know that key fobs are slowly getting replaced by smartphone apps and are soon going to become a thing of the past. However, giving the key fobs a desirable makeover might slow down the process. Thankfully, Mercedes has completely overhauled the design of the key fob the S Class by replacing the aging design with a very cool-looking, desirable unit that has metal surrounds and made with top quality materials.

The 2021 Mercedes Benz S Class is scheduled to hit the US markets in the first quarter of 2021.