As Oscar Wilde famously said, “imitation is the sincerest form of flattery.” However, that quote doesn’t quite apply in the world of automobiles when someone tries to create a poorly built replica of exotic supercars. Mostly made out of fiberglass, the warped dimensions and the silly underpinnings, including the puny engines, generally don’t fool anybody. However, a mad scientist has managed to build one of the more convincing fake supercars with the help of 3D printing. Physicist Sterling Backus decided to 3D print a Lamborghini Aventador in his off time with the help of his son. Spending nearly one and a half years for about one hour a day, Backus brought his creation to life which he named “AXAS Interceptor.” According to the physicist, the whole idea of building an Aventador in the garage came up while playing the video game Forza Horizon 3 with the son when the kid asked him about whether they could build the car. 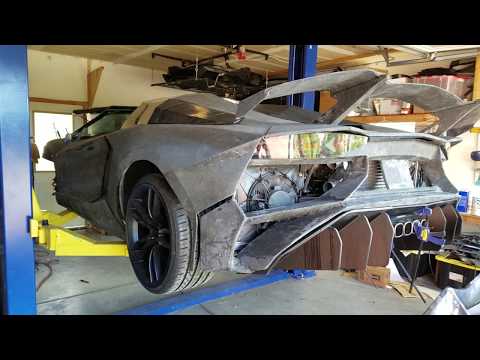 While the chassis, transaxle, engine, and some of the other structural parts have been taken from other cars, the whole body was created using a 3D printer and 220 spools of thermoplastics. All the parts were made in a small 3D printer at the physicist’s home and were later stitched together to make different parts. Even the headlights, taillights, air vents, and the other interior parts have been 3D printed. The PhD physicist who designs lasers for research and an adjunct professor at Colorado State University says,” Originally we were going to build it out of steel on a buck, but seeing how far 3D printing had come, we decided to 3D print the car instead.” He further adds, “I had no prior experience in 3D printing or encapsulating the parts. The encapsulation was based on skinning techniques I saw on YouTube.” As far as the hardware underpinning the Aventador Replica goes, it doesn’t come with a fire-breathing V12 but a. 5.7-liter LS1 sourced from a 2003 Chevy Corvette. The transaxle was also sourced from a Porsche 911 of the 996 generation, which means the replica Lamborghini won’t be slow. In an interview with Australian Magazine What Car, Backus said: “We have a long way to go in finishing the car. We have had our ups, and downs, but the journey has been a ton of fun!”