The U.S. sanctions list has recently witnessed some action owing to a new round of sanctions targeting Kremlin-connected elites. This time the list released by the U.S. Department Of The Treasury highlights a very prominent name, twice- Andrey Guryev, both father and son, along with their 269-feet steel and aluminum superyacht Alfa Nero. Andrey Guryev, the father, is a well-known associate of Russian Federation President Vladimir Putin and previously served in the Government of the Russian Federation. Andrey Guryev, the son aka former CEO of PhosAgro, was earlier sanctioned by Australia, Canada, the European Union, Switzerland, the U.K., and now the U.S. Department of State, the final nail in the coffin. 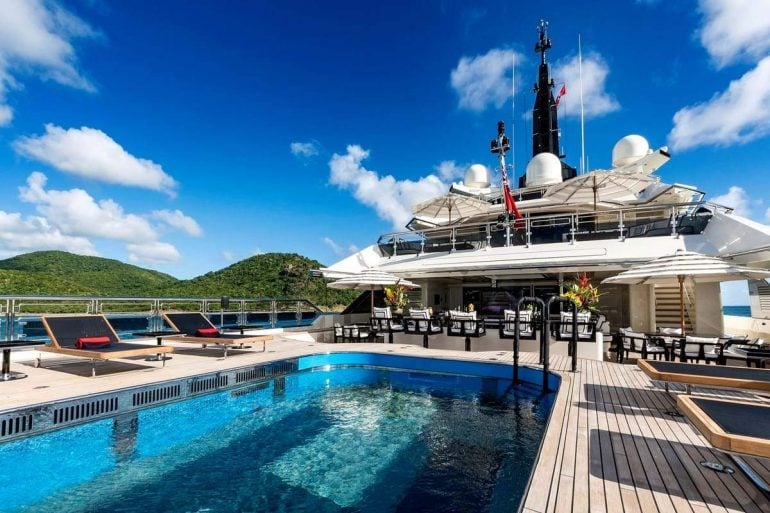 Superyacht Alfa Nero, flying under the Cayman Islands flag, was bought by Guryev for $120 million in 2014 and will be known as blocked property henceforth. The magnificent Alfa Nero turned off the AIS transponders to go invisible from being tracked, violating international maritime guidelines. Like other Russian oligarchs, the Guryev duo also tried their best to save their ship by indulging in ‘disappearing acts’ that they have successfully pulled off since March, but the show has ended.


The superyacht has stayed in the dark in the Caribbean. Since March, Marine Traffic has reported Alfa Nero as out of range, proving its location transponders were turned off. Since the start of the Ukraine invasion, the Guryev clan has had a tough time maintaining their luxurious boat, pay crew, and staff ever since the sanctions came into play. Moving money around the U.S. systems will be an even stricter ordeal as it will now be considered illegal for them to pay the staff of Alfa Nero in the United States.
Alfa Nero remains moored and motionless with a skeleton crew in Antigua. Interestingly, the AIS of the stationary luxury vessel was updated after the sanctions were imposed after a sabbatical of several months.
Amazing features of motoryacht Alfa Nero-
The $120 million ship is the work of Dutch shipbuilder Oceanco, designed by Nuvolari & Lenard with stunning interiors by Alberto Pinto. Alfa Nero accommodates twelve guests in six cabins across four decks. Interiors flaunt a nautical theme, generally understated with sporadic elements of pop art.
The stunning infinity pool is a 40–feet masterpiece that doubles up as a dance floor or a helipad using a hydraulic system. The luxury boat includes three separate dining areas, a dance room, a gym, a beauty salon, a spa, a glass elevator with access to all four decks, and a beach club.
Tags from the story
Billionaires, Superyacht