With most yachts having the same shape, silhouette, and features, it can be difficult to tell one from the other. Had it not been for emblazoned names, most ships would look identical. In the case of 231-feet long Skat, it’s not the name that’s the identifying factor; it’s the ship in its entirety. The distinct boat is a cross between a warship and pleasure craft with 9906 inscribed on her side. It wouldn’t be wrong to say, Skat is a warship on vacation, and we, for one, cannot wait to explore the details: 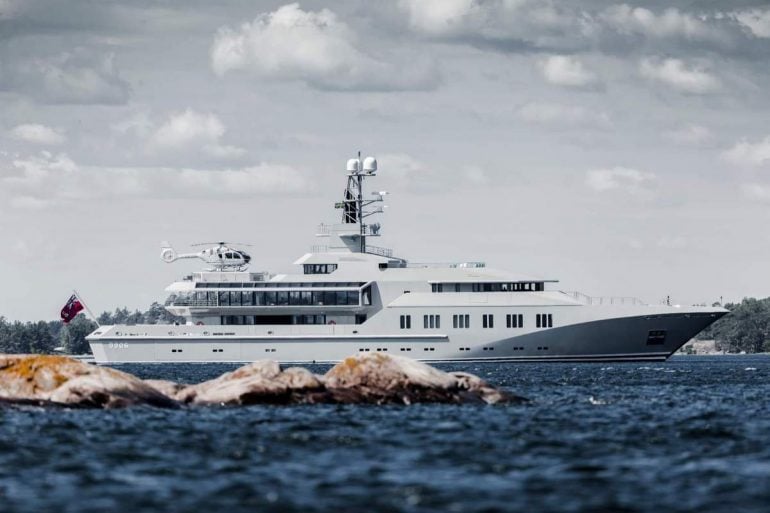 Salutations to the vacationing warship, Skat by Lurssen:
How Espen Øino managed to make Skat look like a home away from home despite its imposing grey sides, high bow, and faceted superstructure, akin to military vessels, is a question only he can answer. The 9906 emblazoned on her side has meaning. It was naval architect Espen Øino’s sixth design commission in 1999, and grey is the initial owner’s (Charles Simonyi) favorite color, shared Boat International.


The owner had a precise vision for his ship- use of arcs, circles, flat panes, etc. The directive was to avoid complicated shapes, keep the design uncomplicated and respect the material used. That explains the lack of undulating surfaces on the exterior and the interiors done by acclaimed designer Marco Zanini. With such a clear vision in place, it was a non-shocker that the entire design process took just six or seven months to complete. “Working with this fascinating client was a wonderful experience. To him, nothing was a problem, merely a challenge,” Øino said.
A closer look at the superyacht today makes it hard to believe it was commissioned in 2002. The analytical mind of the owner drove the designers even further to push the boundaries. Marco Zanini shared the design ideology with Boat International, ‘It was easy. Clean, precise, uncluttered, practical, useful, and, if possible, multi-useful. I designed for him a yacht that sails, not a Tudor palace. I suppose it helps that I had been sailing for years. The interior is extremely modern, in tune with the owner’s vision of the world and the outside design of the ship.” With a new owner, not much changed in this nearly-perfect luxury vessel. There were substantial changes made to the sofas, chairs, and other soft furnishings as Skat was now catering to a family. The office was transformed into a child’s cabin, and the same was done with the guest cabin. Also, a door was added to allow the family cabins to be a private wing. With kids in mind, the room was made for a swing set, trampoline, and sea pool.
Skat boasts an uninterrupted clean layout based on functionality. The guest and owner’s cabins are placed on the main deck. The main saloon is clutter-free, packed chiefly with pop art by Victor Vasarely and Roy Lichtenstein in the name of decor. The grey background allows the artworks to pop out and be a highlight indeed. Skat boasts a helipad, a modern gym, and a bridge deck that would floor even the most fault-finding yachting enthusiasts.
With 270-degree windows, the area unintentionally looks like a conservatory providing panoramic views and ample natural light, enlivening the interiors. The open plan allows the space to be used for multiple functions. This fantastic pleasure craft also houses a library and guest office to starboard, while the lower deck accommodates the beach club and dive store.
The aft deck harbors the informal saloon, including a bar and gaming area for large groups. Every activity from dining, napping, or simply sun gazing can be enjoyed over the stern. The crew quarters deserve a special mention mainly because the entire lower deck is dedicated to the crew, complete with spacious double cabins featuring a desk, wardrobes, and an en suite. A lift with two doors opens to the guest corridors, one side and the other to the crew side. Skat boasts a cruising speed of 17 knots and is built with military technology to reduce noise and vibration. The massive ship flaunts sound levels of only 34dB in the master at cruising speed. The $60 million vessel is powered by 2 MTU diesel engines.
The stunning Skat superyacht was sold in November 2021:
In November of 2021 Skat got a new owner, with Stuart Larsen from Fraser Fort Lauderdale representing both the buyer and the seller. “In my view, SKAT was one of the most exciting yachts on the market this year.” commented Larsen.
“She was extraordinarily well built, impeccably maintained, and her layout and design are innovative and elegant. Her enduring appeal was confirmed by the extraordinary interest shown by buyers during the Monaco Yacht Show.”
About Charles Simonyi:
This early Microsoft employee got recognition first as the chief architect of Microsoft Word, Excel, and other widely-used application programs. Later on, he co-founded Intentional Software in 2002, which Microsoft eventually acquired in 2017. His fascination with science and space got him aboard Soyuz TMA-10, becoming the fifth space tourist and the second Hungarian in space in 2007.
In 2009, he made a second trip to the International Space Station aboard Soyuz TMA-14. Reportedly Simonyi paid $60 million to jet to the International Space Station twice. As per Forbes, the Ph.D. in computer science from Stanford is worth $5.6 billion who worked as a night watchman in a computer lab as a teenager to play with the machines!
Tags from the story
Billionaires, Superyacht